Category: Star Trek (but also the first in ST novels: Titan)
Last article published: 16 September 2022
This is the 1835th post under this label 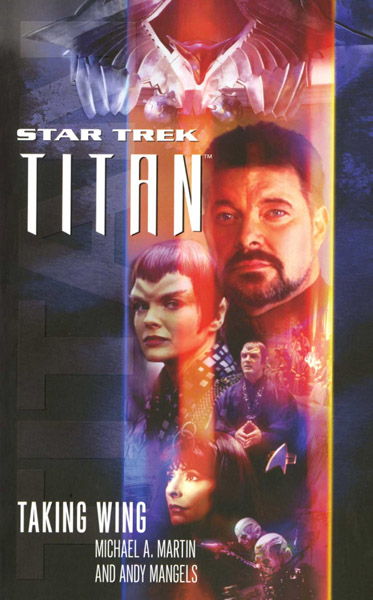 PLOT: The USS Titan is about to get under way, with Captain Riker in the center seat, and the most diverse crew ever assembled on a Starfleet ship. Except before they take off on their mission to parts unexplored, they are sent to Romulus, to help broker a peace between Romulan factions (and Remans too) in the wake of Shinzon's death and the resulting power vacuum. They must also rescue Ambassador Spock and a Starfleet Intelligence operative who turns out to be Tuvok, whose fates are uncertain given the events shown in Nemesis. An uneasy truce is only attained once the Remans make a move and Riker has to pull a rabbit out of a hat - using the Remans' Klingon allies to force Romulus' hand. Unfortunately, the solution only comes after the ship's chief engineer is killed and security chief placed into a coma, making room for the ship's designer and Tuvok to properly join the crew. The Romulans might have taken a bigger hit when its fleet disappears in the space-time anomaly left by the Scimitar's explosion in Nemesis. Titan investigates and is sucked in too, winding up in another galaxy!

CONTINUITY: Aside from Riker and Troi, members of the crew who have appeared before include Lt. Melora Pazlar (DS9's "Melora"), Nurse Ogawa (TNG), Sariel Rager (TNG's "Schism" and 3 other episodes) who has moved from helm to ops, and ultimately, Tuvok (VOY). Some characters had already appeared in print, like First Officer Christine Vale, the Enterprise-E's security chief in books set before Nemesis (the A Time to... series), and Ranul Keru who also appeared in those books and others (Rogue, Trill: Unjoined). His partner was Hawk from First Contact. Along for the trip is Admiral Akaar, the Capellan baby born in "Friday' Child"; he had appeared as an adult, along with Tuvok, in Sulu-era Excelsior novels, including The Sundered, which also introduced the Neyel of the Small Magelanic Cloud (where Titan ens up at the end of the book). Dr. Ra-Hevrii, the ship's designer, once had an affair with Lwaxana Troi (Deanna doesn't know). Admiral Ross (DS9) also puts in an appearance and I don't like him any better here. On the Romulan side of things, the book uses Tel'Aura and Donatra (Nemesis), (from Unification), Tomalak (TNG), and Ambassador Spock (who is apparently married to Captain Saavik, but I guess they don't see nuch of each other). The book attempts to reconcile the two names given for Romulus' capital city given in various books, Ki Baratan (Vulcan's Heart) having replaced Dartha (Unification novelization) when Praetor Neral came to power.

DIVERGENCES: Late-era Pocket books are pretty tight (they take place after the various series and have their own internal continuity), so no much, though I find it very strange that the helmsman position is called "flight controller" (to de-gender it? if so, I'll take it).

SCREENSHOT OF THE WEEK - The ship! 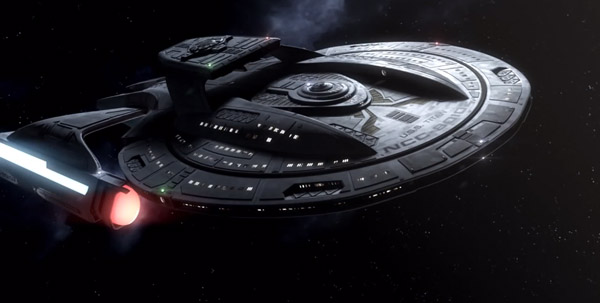 REVIEW: I've made no secret of it over the years, Riker is my favorite TNG character, but my reason for trying out the Titan books is that someone told me the premise was that Riker assembled the most diverse crew in Starfleet. And indeed, the book goes out of its way to create some budget-busting aliens (like the CMO who is basically a dinosaur, the arachnid computer expert, etc.). Riker wants his mission to be a social experiment as well as a trip to unexplored space - pure IDIC. Even the human characters tend to represent different ethnicities. There are some familiar faces, but for the most part, we're meeting new people, even if some have appeared in other books. In fact, all the back stories for these characters can be a bit of a pain and leave new readers wondering if they should have started somewhere else. Martin & Mangels' prose is sometimes clunky and there are a LOT of names to learn, many of them difficult to remember. Exchanges like this: “Doctor Shenti Yisec Eres Ree,” Troi said, “may I present Doctor Xin Ra-Havreii of Utopia Planitia.” are common, and starting on Romulus (in the wake of the TNG movie no one cares about), adds even more "alienness". Hiding Tuvok's identity seems pointless in those sequences given the authors just blurt it out later, and the opening chapters might have benefited from our knowing. In fact, my eyes glazed over whenever we were on Romulus and none of the Titan crew were present. So it was a little hard to get into, but I think the book grabbed me when Riker recruited his first officer. There was the humor and out-of-the-box thinking that made Riker my favorite (and it definitely pays off in the climax - the man plays jazz in everything he does). I like Christine and her manic energy too, and Troi comes out of this looking very good. We're inside her head more than is achievable on screen, and better understand her powers, and thus the people around her. And that means she can be motivated to make diplomatic power moves. So while the mission does its job in terms of making the characters shine, it's also apparently unlike what the series is meant to be about. Everyone goes on and on about finally getting a pure exploration assignment, and then this, which isn't. And while the second book will apparently take place in parts unknown, it's not REALLY pulling a Voyager, is it? (If so, poor Tuvok.) But no, a quick look ahead shows it's just another delay before they can go out and explore. So why is the "pilot" like this? Similarly, two members of the staff are introduced, given relationships, etc. only to be knocked out of the series before the end. Still, Taking Wing pretty efficiently makes its introductions, supplies a lot of action, and most importantly, I can imagine Riker's trademark grin in certain scenes. At the end of the day, while I question some of the decisions, I find there's a lot of potential in this ship and its crew and would I read another? Yes, I would.
ST novels: Titan Star Trek

LiamKav said…
"I find it very strange that the helmsman position is called "flight controller" (to de-gender it? if so, I'll take it)."

The Helm position has been called "Conn" since the start of TNG. "Ops and Conn" were the two front positions. I think "helm" might have crept back in over time but I'm not sure.

(As someone who started with TNG and then went back to TOS, it always sounded weird that Kirk said "you have the conn" to someone rather than "you have the bridge".)
September 25, 2022 at 10:36 PM