Category: Suicide Squad
Last article published: 20 February 2022
This is the 41st post under this label

So Suicide Squad volume 2... this one I've never read, and right off the bat, between Giffen's humorous banter and Paco Medina's cartoony style, I shudder to think what this will be like. As it's only 12 issues. I still think we're going to return to this in the coming weeks until all its members are retired. So here we go, covering the deaths and departures that occur in issue 1 alone. Prepare to say goodbye to 80% of the Bwa-ha-ha Injustice League - which I suppose is Giffen's to do away with - but why did they have to wear off-brand costumes? Yuck. /End editorializing. /Begin digging through those classified Task Force X files.

Profile: Injustice League member; failed Flash villain.
Powers: Super-strength and super-dumbness.
Mission: Rescue kidnapped scientist from bio-engineered monstrosities on an island off Iceland's coast.
Chance of survival going in: Low. You'd think Giffen would have love for the character, but there's a reason he was relegated to the comedy Injustice League. His chances are further tanked by this being the first issue of a new Suicide Squad series. I feel like the downward trend is pushed by the terrible new costume.
Retirement: DECEASED. Naively embraces a "popper", a kind of explosive suicide drone that looks like a child. (Suicide Squad vol.2 #1) 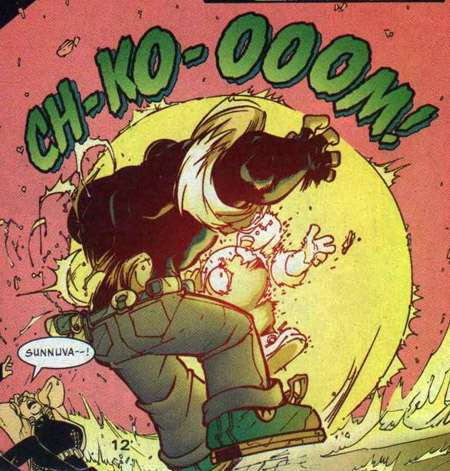 Final report: Dufus P. Ratchet was well and truly killed, which means that name appears on a grave stone somewhere... no sense of occasion. I am forced to note that the DC Wikipedia relates that he was killed by flesh-eating ants, which is absolutely not the case. Is this a cover story put out by Task Force X to prevent the world from knowing about "poppers"? 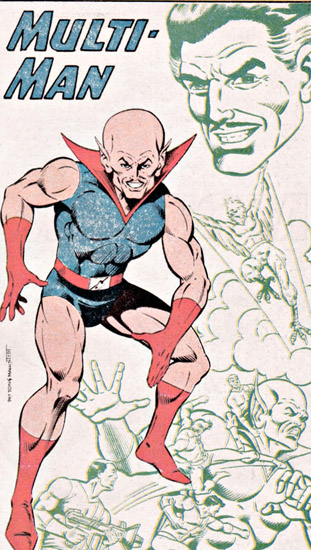 Profile: Injustice League member; failed Challengers of the Unknown villain.
Powers: Gets filled with a different power each time he dies (here: shrinking one's enemies).
Mission: Rescue kidnapped scientist from bio-engineered monstrosities on an island off Iceland's coast.
Chance of survival going in: Low. As with Big Sir, but since his whole deal is resurrecting himself, it's no waste.
Retirement: APPARENTLY DECEASED. Shot in the back of the head by mechanical flying drones controlled by Eve, a bio-engineered monstrosity. (Suicide Squad vol.2 #1) 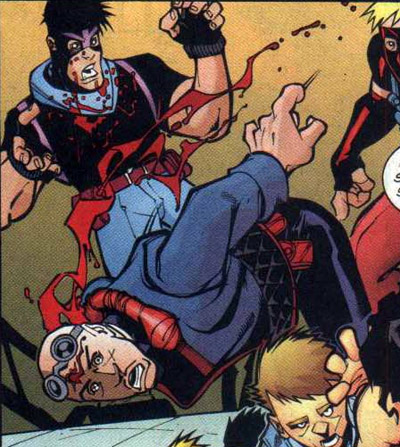 Final report: Multi-Man is shown to be alive again - not too surprisingly, given that he is a "resurrection man" - in the Last Laugh storyline. The Joker murders him repeatedly until he gains a power that helps him break out, and he remains with the Slab inmates for the run of the event. 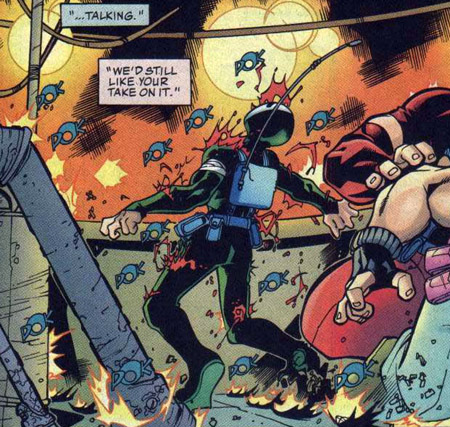 Final report: Time really did run out on the Clock King. Tragically, his was the only new costume that had potential. 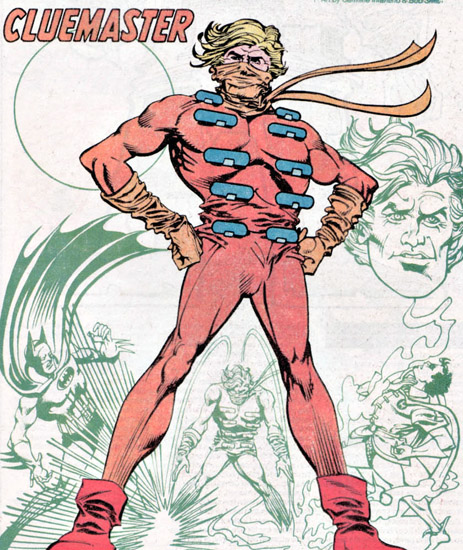 Profile: Injustice League member; minor Batman villain.
Powers: Utility "belt".
Mission: Rescue kidnapped scientist from bio-engineered monstrosities on an island off Iceland's coast.
Chance of survival going in: Medium. Because of his connection to the Batman family, and Spoiler in particular, it's more of a risk to kill him off and risk the Batman editorial offices reversing the decision anyway.
Retirement: APPARENTLY DECEASED. Shot multiple times by mechanical flying drones controlled by Eve, a bio-engineered monstrosity, while protecting Major Disaster. (Suicide Squad vol.2 #1) 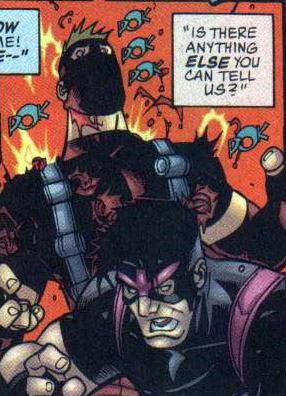 Final report: Classified mission or not, Major Disaster wanted to Cluemaster's daughter (Stephanie Brown/Spoiler) to know her dad died a hero for having his back. Cluemaster is later revealed to have survived (Waller finds out in issue 9), although physically scarred, in the War Crimes storyline. He finally gets out of the hospital to discover Stephanie is dead and he decides to take revenge on Batman. As it turns out, survival runs in the family; the next time he sees her, she is the new Batgirl and they are working at cross-purposes.

This new Suicide Squad doesn't seem to have as good a deal going for it. The villains complain that while it might help them at their next parole hearings, it also might not. The guys running Task Force X - General Rock and Bulldozer, both formerly of Easy Company - joke about getting to see the Squad members die. We'll see over the course of the next few week just who else they rope into working for them and how many survive. But if Giffen is sending us the message like "no more Bwa-ha-ha, more like Mwa-ha-ha", it's a muddled one in light of the comedy dialog.
Comics JLA Suicide Squad