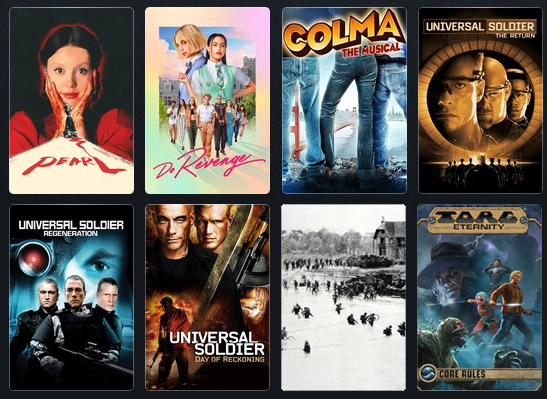 In theaters: I didn't know I wanted X to become a trilogy, but I'm there for it. Pearl gives meaning to having Mia Goth play the old woman - unrecognizable under tons of make-up - in the first "Maxxxine" film, and just as X emulated the look of 70s exploitation horror, the prequel pays homage to Judy Garland's Technicolor dreams - the plot is out of A Star Is Born and several movies of that sort, but the iconography is right out of The Wizard of Oz (dancing with a scarecrow, a man with no brain, one with no heart, a wicked witch who gets water thrown on her...) - those movies, but demented. Since it's set in 1918, you'd think making it a silent film would be more appropriate, but those elements do exist as part of Pearl's fantasies (and those Starquest movies often WERE set earlier, everyone was auditioning for the Follies, etc.). Now normally, you don't think of slashers as an actor's showcase, but Ti West gives Goth a magnificent monologue. Seldom has an axe murderer been able to speak their truth in this way. She's amazing and elevates these films beyond what even the directorial flair manages to do. As with X, the slasher elements are kind of the weakest part of this, and I felt in this case like when it ended (and what a shot!), there was so much more to tell. 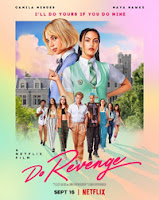 At home: We're practically in the Buffyverse with Do Revenge. It's not that Sarah Michelle Geller is in it, so much as the idea of this crazy prep school with obscenely rich kids who banter with references they shouldn't know, soundtracked by 90s alternative  bops. It's like I was back 25 years, but with today's social media landscape and woke issues. At first, this is Mean Girls meets Strangers on a Train, as two unlikely friends agree to "do revenge" on each other's villains. At first, because it twists back on itself, and then back again, which is good because the movie is poorer when its focus isn't on this revengy friendship. Should we be cheering these revenge-seekers on? Not in the real world, but the main villain is plenty evil AND I think we know exactly the kind of person he's going to become from the MINUTE we meet him. Bonus points for Sophie Turner's small, but insane role as well. Do Revenge is surprisingly fun, despite being derivative of Heathers, Clueless, Veronica Mars, etc.

When it comes to cheaply-made indie movies, several genres come to mind - horror, sci-fi, mumblecore - but a musical?! Colma: The Musical gets bonus points for being ballsy enough to attempt it, but regardless of its origins, I quite like it. Colma is one of San Francisco's outlying towns, a sleepy suburban dead end town, to hear the characters talk about it. Three friends, just out of high school, dreaming of better things, but will they ever get out of Colma? (And in a metaphorical sense, of their teens?) Their stories are slice of life stuff with a layer of comedy on top, but it doesn't mind going for hard dramatic beats. And of course, it's a musical, with pretty fun songs. They are under-produced, befitting the budget here, but that fits this world perfectly. Just kids, singing their lives, in an under-producing town. We don't need big orchestras, or rather, we just don't have them in Colma. Nevertheless, the film has fun with it, finds amusing ways to stage its numbers (and it DOES have big choreographed numbers in addition to more intimate songs), and is even a little meta about it, which I like.

Let me start, right off the bat, by saying I am not a fan of the original Universal Soldier, and that I have not watched the two Battaglia sequels, but when I want to JCVD, neither of those things are going to stop me. Universal Soldier: The 90s-TV-strength The Return (I am SHOCKED to read this actually had a theatrical release, based on its look alone) seems to follow the feel, if not the exact details, of the second and third films, with its TV pilot set-up (which it blows up), Luc Devereaux having a little daughter, etc. Luc is up against better stronger Unisols (most notably Bill Goldberg) controlled by a mad computer. At first, I was, like, why is this computer voiced by Michael Jai White of all people, but then SETH gets implanted into his body, so that was lucky. While The Return is fun to hoot and holler at, it's NOT a good movie (give or take a couple of action scenes between Unisols). The computer stuff is nonsense, the story logic is shoddy at best, the reporter character is a terrible cliché on very front, it has T&A but is sexually immature about it, there are obvious typos on computer screens, and I really hate the noisy metal soundtrack. It's kind of fun, but not for the right reasons.

Only the original Unisol is still in continuity by Universal Soldier: Regeneration, and that's for the better. Gone is any attempt to make Luc Devereaux the star of a television premise saddled with a government supercomputer and a family to protect. More than 15 years after the events of the first film, he's part of an experiment to reintegrate these zombie soldiers into society (it's not going too well), but will have to be called back into service to deal with Russian rebels who have taken over Chernobyl and threaten to blow its stacks and irradiate a good chunk of Europe. What makes this a Unisol story is that the rebels are working with a scientist who is making his own, including a (cloned?) Dolph Lundgren (I mean Andrew Scott). Luc is shell-shocked throughout and Andrew is tortured - even Universal Soldiers get PTSD. I like that modern twist and the fact that the movie follows the story as it should develop and doesn't try to force a formula. JCVD and Dolph are only really a concern in Act 3 (not sure their rematch is all it's chalked up to be, honestly), and we seem to follow a young soldier being groomed for taking on the role (Mike Pyle) instead. That's fine. The slick-looking result is more of an ensemble piece, and a pretty good military thriller with a touch of sci-fi.

After eschewing the Unisol formula in Regeneration, writer-director John Hyams made Universal Soldier: Day of Reckoning all about conditioning and turned in a mind-bender starring Scott Adkins (Ip Man 4) as a new Universal Soldier, but he doesn't know it. The movie pushes the "Bourne" element pretty far, but its main inspiration is Apocalypse Now, with JCVD's Luc Devereaux as a Kurtz-like figure, and Dolph Lundgren as his high priest. Very weird roles for them, but I certainly appreciate how Hyams is breaking the mold he's been handed. They are liberating conditioned soldiers, creating a religion/culture/insurrection of their own, but the soldiers are only really trading one form of conditioning with another. Pondering the question of free will in the middle of all this brutal carnage may cause a bit of cognitive dissonance. Speaking of Surgeon General warnings, Hyams' directorial flair may or may not be epilepsy-friendly. I know they run these things through filters, but sheesh, it made me wonder if I got brainwashed during those hallucinatory scenes. Bottom line: Day of Reckoning does something completely different within the franchise, in fact unlikely in ANY action franchise, while still delivering a lot of action. Respect! 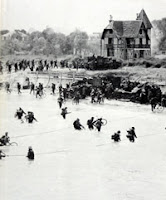 Books: Unless you're familiar with the nomenclature of the Second World War, Time-Life's The Second Front won't register as the book that really should have been called D-Day. Not that these mail-order volumes were too concerned with any given title's marketability, since you got them in whatever order the publisher decided to send them to you. But it really is about the invasion of Normandy (another better title, perhaps), from the Germans' preparations to defend those beaches, through the failed attempt at Dieppe, to the day itself and the few weeks that followed until the Allies managed to get a stable foothold in Northern France. It's a story of mistakes, especially on the German side, and of ingenuity (with great diagrams of the funky tanks created by the British to handle the beach attack). As usual, with lots of pictures (the Life Magazine part of this), though historians will cry at the story of why there are so few pics of D-Day itself. A solid compendium of the events of the day, those that led up to it and its immediate results.

RPGs: In the old Torg, Japan was taken over by the clumsily-called Nippon Tech and it seemed to me the most boring Cosm (but I didn't yet get the bug for Asian cinema, so maybe that was part of it). Torg Eternity changes the name to Pan-Pacifica, extends it into China and Korea, and makes it a lot more interesting  by pushing genetic science to the point where it's Resident Evil meets Train to Busan. They've looked at uniquely Asian media elements and made sure they're well represented, from J/K-horror to kung/gun fu to gangland yakuza tales to anime-ish "electric samurai". Not that the characters available in Day One: Tokyo started with any real competence. There's the creepy psychic schoolgirl, the judo-trained security guard, the teen hoodlum, and the failed manga artist, and they don't find weapons until the third act, fleeing from a zombie apocalypse that leaves them infected (with a cool secret card mechanic - I had to teach myself to create specialty decks in Foundry, very easy) and puts them up against impossible threats. I like how the Day One adventures are set up - in the first two, YOU'RE unstoppable dinosaur and dragon slayers. In this next chapter, the players of course come in with a certain over-confidence, which is soon dashed as NPCs get torn to shreds. (Full disclosure, I was entirely ready to kill half the party very early, and had replacement PCs in the wings for them - I'm kind of sad the bubbly fashionista never got any play.) I was accused of playing my "Paranoia games", which I admit I excel at, but that's what Pan-Pacifica is supposed to be like - paranoid, where you don't know if you can trust even the other players, and with its low, low Spirit axiom, filled with despair. There are times when I think my group and I are too jokey for horror games, but I had to admit I've had a lot of success running horror one-shots.
Best bits: Marty's first game, and he kept rolling Mishaps (like at least 5) and causing all sorts of havoc, which makes sense when you remember he's just a 16-year-old high school drop-out. Also points for Fabien learning all those judo moves, Bebert writing his own manga on the side, and Pout saddled with playing a little girl who no one ever lets get a scratch. She's the only survivor, but the way this ends, it doesn't sound like a positive. Kanawa Corp's guinea pig?
Geekly roundup Play RPGs

Pout said…
You think knowing judo moves name was cool? You should ask Fab about other prep he did for his character. Amazing backstory! Stuff didn't come up directly but informed a lot of the small details of why he played a certain way.
September 27, 2022 at 6:49 AM