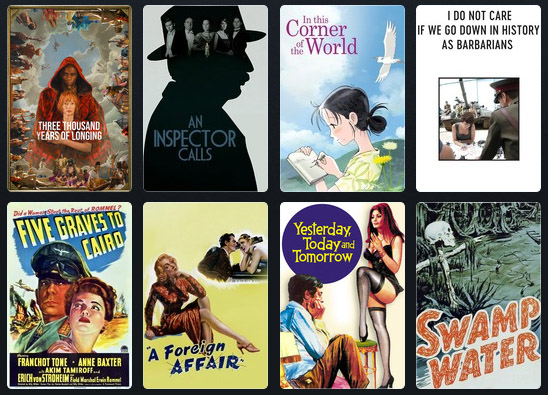 In theaters: Though it seems the studio didn't know how to market it, so just... didn't, George Miller's Three Thousand Years of Longing is a gorgeous film about loneliness and the role stories play in filling that void. Not coincidentally, I think, it's a COVID movie, with small cast clusters, actually masked extras, and a theme that's relevant to the pandemic era. It's the story of a woman (Tilda Swinton) who finds a genie in a bottle (Idris Elba), but wait, she's a narratologist and quite the expert in tales about wishes, so it's not going to be as easy as all that. Since it's all about stories, the Djinn's own are lushly told, real feasts for the eyes and ears, and there's enough ambiguity that you can believe he's real or not. Would you rather have Miller's wonderful connections between the tales and Swinton's life be indications that she's making them up, or the reverse, that fate is creating those correspondences? Where does reality leave off and imagination come in? I can't say the film creates the heartbreak it seems to aim at - it's too intellectual for that - but as a modern fairy tale, inventive and perspicacious, it works quite well.

At home: Based on the J. B. Priestley play, An Inspector Calls is a savage attack on privilege - Victorian and Edwardian at the time, but it still stings today - starring David Thewlis as a mysterious and off-putting inspector who shows up at an upper-class house where upper-class people do upper-class things and accuses them, one by one, of having destroyed a person's life. (A lot of detectives are off-putting. Quirk of the required personality, or trick of the trade?) He's great in a role that requires him to do a lot in as economical a way as possible. And while the detective story seems to have a big whomping coincidence at the heart of it - depending on what you believe - it works because the interrogations suck you in. We love to see the rich and powerful squirm, then shake our heads at their justifications, acknowledging the potent satire. In the play, you never really know what Inspector Goole's secrets are, but the film attempts an answer, which I find satisfying in its own way so I'll endorse it. I hear that generations of British kids were taught this work in school (not the case on this side of the Pond); I wonder how they feel about that bit of creative license.

Fumiyo Kōno's manga, In This Corner of the World, makes for a luscious, charming, and ultimately heartbreaking anime. Suzu grows up in 1930s Japan and comes of age in the 1940s, and since she's from Hiroshima, a sense of dread pervades many parts of the film. For the most part, it's lackadaisical slice of life stuff, and so specific in details, I'm surprised this isn't overtly based on a memoir or the original author's experiences. The vignettes turn from innocent campagnard elements - the hardships and joys of being a woman in this time and place - to tense and eventually horrifying war material, but never abandons its sensual specificity. Some will find the "plot" lacking, but the series of lived moments do amount to a full and rich story. These are things that happened to Suzu (and to other Japanese civilians), things that have shaped her life, that live in her memory. And of course, it's very pretty, sometimes going to an "artist's vision" of things (Suzu's) where anime's capabilities are well used. The pace is slow, but I was rarely ever less than riveted.

A textured satire about historical amnesia and the sustainable power of propaganda, Radu Jude's I Do Not Care If We Go Down in History as Barbarians may overtly be about Romania's collaboration with Germany in World War II and its rampant antisemitism, but it could just as well be about any country's (willfully or ignorantly) forgotten misdeeds - to hit most of my readers, Canada' s mistreatment of indigenous populations, Britain's colonialism, and the United States' love affair with slavery. The film features the impeccable Ioana Iacob as a theater director trying to stage a big public reenactment that includes the massacre of Jews, an event swept under the rug by decades of historical white-washing. The event itself is shot in video, so it appears to have been staged for the town square, not the camera, and I had to wonder how much of the public's reaction was staged, and how much was real. If it was, it's even more shocking. Here's the thing. The film gives us all of Iacob's research, as well as long discussions about history and philosophy as she tries to convince city officials or even the show's participants. We're in the loop more than most. But without all that context, what do actual audiences at the show think? Each person according to their own bias or lack of understanding may miss the ironies, or see it as a patriotic work. Shockingly, it seems to inflame anti-Semitic impulses. There are a LOT of things at play in this film, and many brilliant moments (Iacob's last scene, for example, is subtle, but acidic). I agree with the film that we should confront our dark histories, but we can't confront what we don't know (or for the hard-headed, don't believe) exists.

No, Five Graves to Cairo did NOT happen - it's based on a 1917 play, redressed for World War II's oft-neglected North African front - but that shouldn't matter. A British soldier finds his way through the desert to a small town hotel in Egypt and impersonates a member of the staff to fool the Germans, but his plans are complicated by the French maid who has her own designs on Rummel. It makes for a pretty cool spy thriller, with lots of reversals, cracking dialog worthy of the stage, and the sense that, yes, it MIGHT have happened. Billy Wilder starts us off on striking images of a "haunted" tank, opening up the world early - you hardly notice that we're then pretty much stuck in the same ratty hotel. And though made during WWII, it's surprisingly critical of the war effort, through the maid in particular who sees both sides as equally guilty of the suffering, though you could also take the point of the picture to be the justification for personal sacrifice for the betterment (or safety) of the whole. The Germans are "swine" but as honorable as the British (which is to say, partly), while the lone Italian is a comedy figure, probably because Mussolini was already on the outs, and Italians were rehabilitated as cousins to the Ally cause. Or according to this, foolish patsies, not at fault, but not to be admired either. It's the weakest part of this, broaching caricature where the rest of the film lives in grayer areas.

What a strange platypus of a film A Foreign Affair is. With a title like that, and the post-war Berlin setting, you'd think it was a spy-adjacent thriller, and it does have some of those elements. But it also contains some rather educational/didactic moments where the film is trying to convince you that America is doing good work rebuilding Germany, and there's a strong focus on the Marlene Dietrich-John Lund love affair, which pegs it as a romance. But then there's Jean Arthur, in the interesting role (at least at first) of a prim, puritanical Republican congresswoman come to see the "good work" for herself. And the comedic vibe her reactions give off eventually turn A Foreign Affair into outright comedy, albeit a comedy where people can get shot, that includes Nazis, and that very toxic "romance". (I don't know how we're supposed to like Lund's character when his whole flirting strategy is threatening Dietrich with violence.) I'm not saying the mix of drama and comedy doesn't work, because it does, but the movie keeps changing directions, much like Arthur's character who, once the romcom takes hold, because a silly, flighty thing all of a sudden. It's got memorable scenes - like Dietrich's "Black Market" song - but mostly, this felt as awkward as its jokes about Nazis.

Vittorio De Sica is best known for heavy material in the Italian neo-realism style he helped develop, but Yesterday, Today and Tomorrow shows that he can also do frothy comedy - almost screwball - just as well. Not sure how the title really applies except perhaps in how modern each romance is, but the film is a triptych, allowing Italy's iconic sexy screen couple, Sophia Loren and Marcello Mastroianni, to incarnate three different couples. The first story is the longest and the most engaging and amusing, and could have been developed into its own feature, as far as I'm concerned. Lauren is a black marketeer who staves off jail by getting pregnant until she makes her husband ragged. Even if her other characters are more glamorous, she's at her most beautiful and earthy here, and the story is quite fun. The second is a short vignette, almost forgettable but for its savage satire of the upper class. The third, in which Lauren plays a high-class call girl who allows a would-be priest to fall for her (while Mastroianni is her lusty John, swept up in events) is amusing, but ultimately less satisfying than the first story. A very nice change of pace in De Sica's filmography, with actors who can do no wrong.

Renoir's first American film has what I find to be a frequent hallmark of name-directors suddenly not working in their native language - not having an ear for English. Swamp Water, a Southern Gothic tale where Georgia's Okefenokee Swamp is translated as a kind existential purgatory benefits from the director's sensibilities, but the dialog, especially as delivered by cod Southerners, is almost unbearable. I'm sure the novel is also to blame, making all these rural characters speak with bad grammar and hickspolitation clichés, but it doesn't sound right from the obvious non-Southerners in the cast. Dana Andrews is especially bad, even beyond the dialect. It's like he's play-acting reactions here. Anne Baxter is better, but does anyone believe she's so feral as to be "ugly"? Walter Huston, as the swamp hermit whose story acts as a linchpin, is the real star here. Regardless, at least it's shot in Okefenokee and the pervasive sense of injustice and violence there is strong. It doesn't escape the melodrama of the novel, but it moves along at a good pace, has villains to hate, and heroes to root for. I'm just not sure how "Renoir" it is. One of those Hollywood compromises.
anime Geekly roundup