What a Card: Romulan Cloaking Device

Being a look back at cards from the Star Trek CCG, and what I thought of them back when they were fresh and new... in EPISODE order. The Enterprise Incident's MacGuffin... 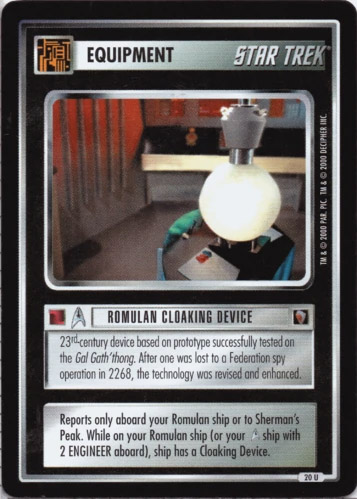 PICTURE: The "cloak room" on the female Romulan commander's ship is colorful, and the Cloak itself a fun retro device, so this is essentially likeable. Captain Kirk was digitally removed from this image, "cloaked" if you will, which is interesting to think about, though his removal does leave an odd finish on the console. A bit of a bric-a-brac, but not a bad look at 1960s sci-fi design. Scores 3.3.

LORE: Tying "Balance of Terror" to "The Enterprise Incident", the lore also manages to add a little more to Trek history with the final phrase. I like it and give it a 3.6.

TREK SENSE: The icons set this up as an OS-era piece of Equipment, and I don't mind it being that card type despite Cloaking Devices usually being built into ships. "The Enterprise Incident" showed that it could be removed and carried (in a way not unlike the Phase Cloak) just like equipment. However, the Device has reporting restrictions, but they don't make that much sense. I don't dispute that it should report to Romulan ships, but if this is an antiquated piece of technology, it should only report to OS Romulan ships. Meanwhile, reporting at Sherman's Peak sets it in the right era, but not necessarily in the hands of the Romulans. In that case, concessions may be made: the Cloak WAS stolen by the Feds, and at some point shared with the Klingons. Still, it's a bit muddled, especially since all Romulan ships of the era are already equipped with a Cloaking Device. As for the effect, it's pretty obvious, but the requirements for its use are interesting. Interesting. Not necessarily sensical. It'll work on Romulan ships, presumably because they have the right plug-in, but again I ask why modern ships should be covered. I mean, I can't plug my old C64 floppies into my PC and they aren't 100 years apart. The second possibility respects the era, and requires a couple Engineers to install the thing (Scotty's adaptation of the Cloak is indeed covered) in a non-compatible ship. The entire concept is highly suspect, and only a couple things actually work: a 1.6.

STOCKABILITY: Cloaking is useful, that much is sure, but it's usually more efficient to just have a cloaking ship than depend on an Equipment card. The Romulan Cloaking Device doesn't count down like the Small Cloaking Device, but it's still a niche card. It'll only work on two types of ship. The first is Romulan, though most ships from that affiliation already have cloaks. It puts the Science and Scout Vessels in the same class as the Romulan Shuttle, the latter adding Launch Portal and Scout Encounter to strategic possibilities that already included Hidden Fighter. The RCD may report aboard (given the appropriate Doorway) and give it the same protection enjoyed by other ships. The high RANGE on the Scout (and Pi) gives a lot of latitude to Engage Cloak. The other possibilities are the USS Prometheus, a cool battleship to give cloaking ability to, and the less interesting T'Pau. The second possible recipient of the cloak is any OS ship with 2 ENGINEER aboard, which basically excludes the Romulan ships of that era since they have one already. So you'd use it on Federation or Klingon ships (the G'roth in the second case, since the Battle Cruiser already has one). It must report to Sherman's Peak in that case, which is a drag, though First Officer Spock can download it special if he is first downloaded by the Starship Enterprise. A lot of work and possible waiting, not to say a cloaked classic Enterprise wouldn't be interesting, especially with Kirk's special skill. Due to its limited value, I can't go above 2.9.