What a Card: Subcommander Tal

Being a look back at cards from the Star Trek CCG, and what I thought of them back when they were fresh and new... in EPISODE order. The Enterprise Incident keeps on giving... 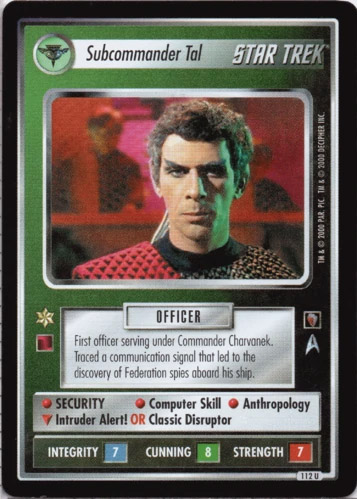 PICTURE: The hot pink isn't so bad thanks to harsh green lighting coming from the right. The mesh of Tal's shirt is matched by that of the grid behind him (seems like the officers like to keep walls between themselves and the crewmen, but keep a close eye on them at the same time). What's probably the headrest of a chair peeking from behind his head is the only element I find distracting, so an overall good 3.5.

LORE: His rank, post and role in the show are all given, and there's no room for anything else. No problems, nor any epiphanies. A 3.

TREK SENSE: The second-in-command of Charvanek's Battle Cruiser, he gets the standard Officer and Command icon combo. His monitoring of communications and detection of the Enterprise's signal accounts for both Security and Computer Skill. As for Anthropology, it might be because the usually reclusive Romulans met other species only rarely, and he did so. Not much of a justification since his contact with humans and Vulcans was still very brief. Possibility that Romulan officers are trained in the skill if going to patrol the Neutral Zone? Charvanek has the similar Archaeology, but I'm grasping at straws. Because he is in charge of security aboard ship, he might respond to an intruder either from the bridge by calling an Intruder Alert! or by responding more personally with a Classic Disruptor. Integrity may seem high, but the Romulans were nicer folks in the Original Series, and in "The Enterprise Incident", they are more the victims of a crime than the perpetrators of one. High Cunning and Strength both follow the Romulan model. A well done 3.7.

STOCKABILITY: There aren't enough OS Romulans to make a deck out of, and I don't think one can even be made viable using OS Non-Aligneds, so Tal will probably be used either with modern Romulans or in a Treaty deck with the OS Klingons. In the first case, the download of the Classic Disruptor probably won't be a high priority, and a Ref-Q download might be saved by having him grab Intruder Alert. Unless your Romulans control a Nor, all you're going to do with that card is download Intruder Force Field and extend its effect to all intruders. Locks an opponent out of a few strategies like The Walls Have Ears and infiltration business, as well as Rogue Borg pinging and Telepathic Alien Kidnappers. Good, but rather defensive. If you're including more than one OS leader, and you should to justify your AU door, still consider the Classic Disruptor as a download. With it, not only do your OS Romulans get a STRENGTH boost, but all the OS leaders gain SECURITY. Tal thus becomes SECURITY x2, which is always good (he suddenly passes Failure to Communicate... and Nanite Attack, for that matter). And in a Treaty deck with OS Klingons, the Disruptor will affect many more personnel cards. He's got good, if more or less common, skills across the board, and very good attributes. Not over-the-top, but useful in a variety of situations at 3.5.