What a Card: Treaty: Romulan/Klingon

Being a look back at cards from the Star Trek CCG, and what I thought of them back when they were fresh and new... in EPISODE order. While it has no real place (not an image pull) and uses the modern-day logos for each affiliation, the lore does reference this episode's technology exchange. Twist: I never reviewed this one back in the day (a quirk of the order I was doing them in, jumping from expansion to expansion), but let's see what I can come up with today... 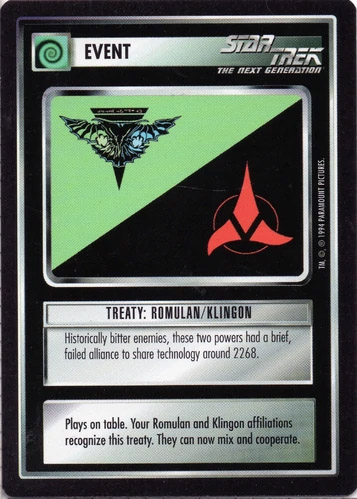 PICTURE: I would have found the Treaties much more interesting if they'd dug up pics of collaborating affiliations, or even mocked some up by juxtaposing the appropriate ships (though would that have been confusing in this case?). The split screen logos are just dreadfully boring. That said, Rom/Kli is probably one of the nice-looking ones, the black behind the Klingon symbol preventing it from looking too Christmasy, and the logos' spikes pointing in opposite directions, but at one another. That may be the best (only?) reason to put the Romulans first in the title (see below), as it's the better aesthetic choice. I'm gonna go with a straight 3, which is wayyyyy above most of the other ones.

LORE: Like I said, it IS a bit weird that it's Romulan/Klingon when Klingon/Romulan would be the alphabetical choice. Because this was in the original "basic set", it sports a TNG logo, but then the lore is all TOS. Obviously, they didn't know they'd ever get the license to do the other shows (it was called the ST TNG CCG then), but regardless, couldn't they have said a little something about the Duras family's treacherous ties to the Romulan Star Empire? After all, it would be years before a player could use personnel and ships from the era described. The oddity lands the score at 2.

TREK SENSE:  Treaties could have gone one of two ways initially, either between affiliations under your control, allowing them to cooperate, or with your opponent's cards, disallowing attacks of any kind. The latter version would presumably have had low Stockability, but the former isn't exactly truthful. Perhaps more so with the whole Duras situation, but Klingons and Romulans don't really mix. As stated, there was a sharing of technology, but they didn't serve together. That's why I think the Treaties should have had different effects based on the true events on the show. Some affiliations HAVE cooperated, though not used mixed crews, others mix freely, others gain other advantages from their alliance. As described, this Treaty might have just allowed the affiliations to use each other's ships and equipment. But of course, the whole point of these cards is for players with smaller collections (or trying to play right out of a starter box) to still play. It's abstract. But Trek Sense isn't about Real Play concerns. A 1.5 given these two hate each other.

STOCKABILITY: Newer Treaty cards were more useful, with seeding and free play options. The original ones, not so much. Say you were running a combined Romulan/Klingon deck, you would be wasting time building separate crews at different Outposts until you got the Treaty card in your hand and got to play it, at which point your crews could mix, attempt missions together, etc. And THAT, of course, WAS useful in the original play arena because there were relatively fewer Klingons and Romulans (Rommies especially) than Feds. Q's Tent helped with getting it in your hand early as of the second expansion. The smaller the affiliation, the more tempting it is to bolster their numbers with a Treaty, which is perhaps more true of later affiliations, but also true if SUB-affiliations like TOS-era Klingons and Romulans who just don't have enough personnel NOT to get help from somewhere to be at all viable. It might be interesting to throw every mission specialist into one Red/Green affiliation and go for lots of bonus points. The Fed/Rom/Kli three-way Treaty may be a better alternative for "out of the box" play, though it does have several limitations that might make it useless to certain strategies (side decks, mission theft), though it's tempting to be able to also include a Federation personnel or two since they are more varied and include some great mission solvers. Ultimately, you're looking at whether the affiliations are compatible (or complementary) enough that it's worth combining them. In this case, they are rather similar (as there are plenty of Klingons with Treachery, both have access to Cloaking, can attack other ships, etc.), so there won't be too much dissonance. But they don't add that much to one another either, so it really is a case of just padding out your personnel base. A 2.9.

TOTAL: 9.4 (47%) It really is from another era, and feels a little obsolete.
CCGs Star Trek