What a Card: Vulcan "Death Grip"

Being a look back at cards from the Star Trek CCG, and what I thought of them back when they were fresh and new... in EPISODE order. One last card from The Enterprise Incident before we move on... 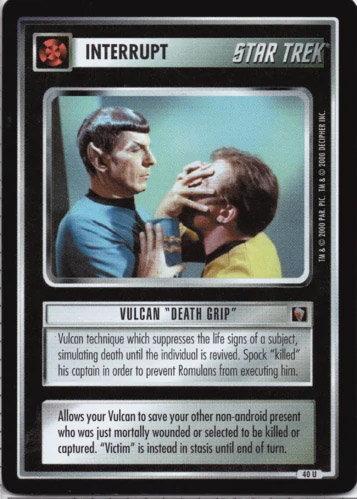 PICTURE: Looks good for a 40-year old pic (at the time), the blues and yellow playing well off each other. One of the few classic scenes from TOS' third season, it gets a 3.4.

LORE: A lot of quotation marks here, but we know what really happened. Plays it straight, and gets a 3.1.

TREK SENSE: A Vulcan can telepathically place someone in a death-like trance, which we'll call stasis for purposes of this game, making the killing or capture of that personnel a moot point. That much works quite well. As your personnel is about to be shot or captured, your Vulcan turns around and "kills" it, so the opponent loses interest in that target (if there isn't a sentient enemy at work, then it makes less sense, see below). I agree that androids should not be telepathically "killable" (or else taking care of NOMAD would have been no big deal). The victim wakes up on your next turn. There are two errors hurting the card. The first is that all threats are not sentient, and no amount of Death Gripping should save someone from a Hull Breach, for example. The second thing is that a mortally wounded personnel is already on its way to dying, and this basically heals it. Sure, placing someone in stasis would put the bleeding, etc. on hold, but there should be a Medical present when the personnel wakes up, or it should die. Had the card more space, it might also have covered situations like assimilation, but that's not such a big deal. Overall, I like the card, and its problems only drop it to 3.3.

STOCKABILITY: We have other cards and special skills that can save a personnel from death, but this is usually at the cost of another personnel's life in its stead. With Death Grip, you don't lose whatever Vulcan you're playing it on, and the card also covers captures. So long as you have a Vulcan alive - and there are some excellent ones both in the Federation and of Non-Aligned complexion - you can play this card to save another personnel. Live Long and Prosper might make a good companion interrupt, saving your Vulcan so it can then save someone else. The price you pay is that the victim is still filtered out of a mission attempt, or must be waited for after a personnel battle. Stasis doesn't even allow you to beam the victim. Androids aren't valid targets, but they're tougher anyway and less likely to die (though they may still be captured). This is balanced protection against a number of dilemmas and the loss of personnel from battling too. It's important to have them ready, so stock a number of them, and manipulate your copies with Prepare the Prisoner since it is a capturing-related card. So much more interesting for the Vulcans than Vulcan Mindmeld, it gets a high 3.9.