What a Card: Wyatt Earp

Being a look back at cards from the Star Trek CCG, and what I thought of them back when they were fresh and new... in EPISODE order. This is a weird one from Spectre of the Gun... 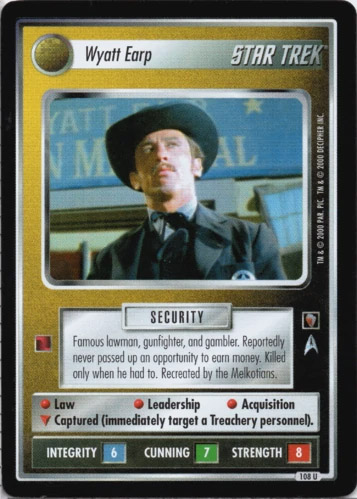 PICTURE: Nice blues and only slight blur (not uncommon for TOS cards), this card is moody, and Earp's name shows up on the storefront behind him. The angle from below is good for an Alternate Universe card, warping the composition. A good 3.7.

LORE: Uses fact and legend about the historical U.S. Marshal in an interesting way (explaining game text), and the last phrase tells us how he fits in the Star Trek universe. A solid 3.3.

TREK SENSE: The game was never good at representing this type of character. He's not really the historical figure, nor are he or the Melkotians from a parallel universe, so AU isn't quite right, except that he's from the OS era and they all both icons. He's a recreation, but he's not really a hologram. See? There's no great way to go about this. He just makes an odd personnel card, period. When a character is planet-bound, like this, it's hard to imagine him as part of a crew, much less using his skills in a "modern" way. For example, while I have no doubt a U.S. Marshal would have Law, how does that Old West-era skill relate to 24th-Century Law as mentioned on missions and dilemmas? To represent the historical/recreated figure, it does do a good job. Security/Law/Leadership for the Marshal duties, and Acquisition for the gambling and other entrepreneurial endeavors. The special download for Captured is a link to the idea that he only killed when he had to (supported by history and legend), and can only target criminals (Treachery personnel). There's not a huge link to his actions in "Spectre of the Gun". The not-so-high Integrity still puts him on the side of the angels, but from a rough-and-tumble time when you made your own law to a certain extent. He's smart and strong as he would have been in history (and was on the show, though Cunning was impaired there by his following a particular script). As a representation of a western hero, there's no problem. Fitting him in the Star Trek universe? That's where the game fails. Let's meet somewhere in the middle at 3.3.

STOCKABILITY: What any non-Borg deck gets with Wyatt Earp is a SECURITY personnel with good attributes, the Leadership to initiate battles, and two relatively rare skills, Law and Acquisition. The latter will fit right in with the Ferengi, or allow for the use of Rules by other interested parties. As for Law, it's much rarer, and you don't want to get caught without it at Drumhead. OS personnel can share those skills with the Classic Communicator. The special download is more of a special skill really, since it doesn't just download Captured, it nets you a Treachery personnel present (they're common enough) of your choice. Captured thus plays even during an opponent's turn, suspending play to do so, perhaps ruining an opponent's mission or battle attempt. All depends on the targets offered, but it's a nice improvement over the regular Incident card. And the only thing you have to worry about is having the means to report AU or OS personnel. Not much of a worry, this scores a cool 4.