Who Are the Creature Commandos?

Who's This? World War II's Munsters. 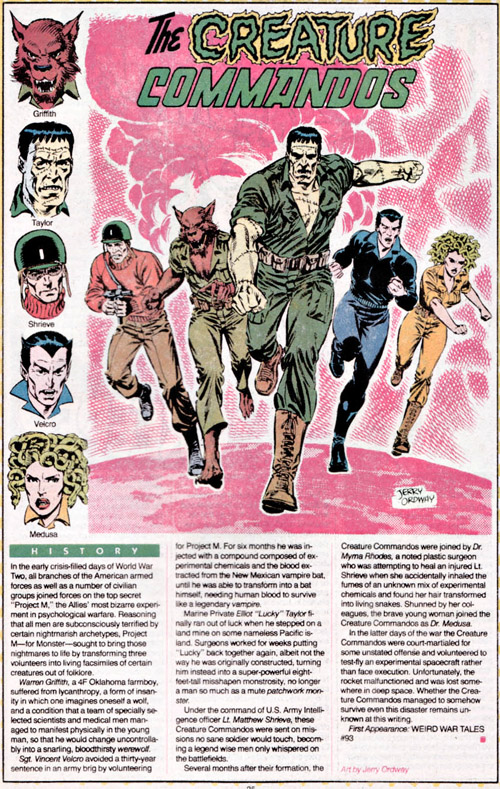 The facts: The original team of monstrerized soldiers first appeared in Weird War Tales #93 (November 1980), created by J.M. DeMatteis and Pat Broderick(!) and appeared in that series until its cancellation in 1983 with issue 124, with Robert Kanigher soon taking the writing reigns. Medusa joins the team with #110. In 2009, the characters are brought back in Action Comics and starred, mutated and cybernized, in an 8-issue mini-series. They later play a part in The OMAC Project.
How you could have heard of them: Well, the New52 rebooted them as Agents of S.H.A.D.E. along with Frankenstein and his Bride. Velcro and Griffith are the only ones who really transition cleanly. The team actually starts appearing in Flashpoint (as the Creatures of the Unknown). And obviously, the Commandos appear in The Brave and the Bold animated series (obvious in the sense that this is exactly the kind of thing that would) and a DC Nation short.
Example story: Weird War Tales #109 (March 1982) "Roses Are Red -- but Blood Is Redder!" by Robert Kanigher and Dan Spiegle 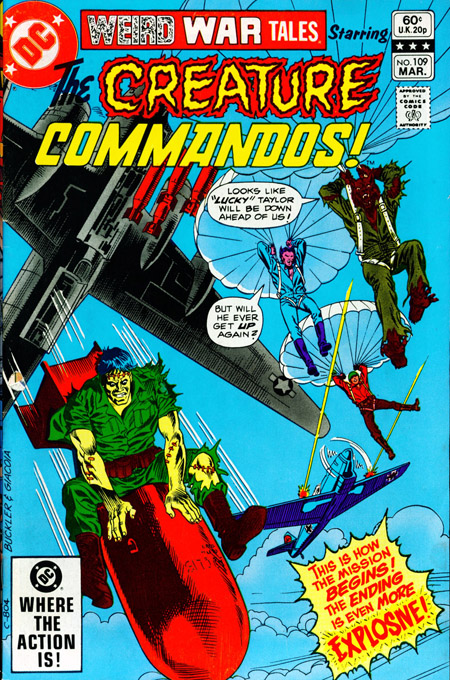 France, some café, wine's not gonna do it for the vampiric Velcro, who has a taste for French barmaid. Look, these guys are MONSTERS. (Question is, based on this, are they ready for their new female member next issue?) 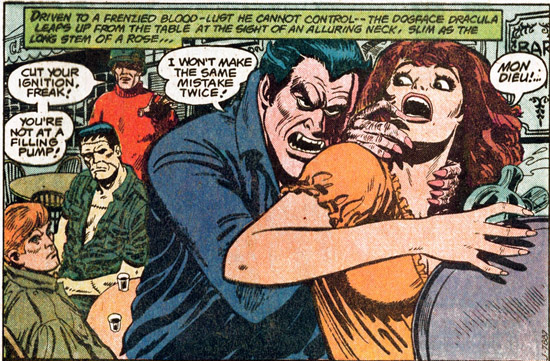 But like Universal's Frankenstein's Monster, the mute "Lucky" has a heart of gold. On look into he sad eyes and he turns on his team mate and swings him into a table. 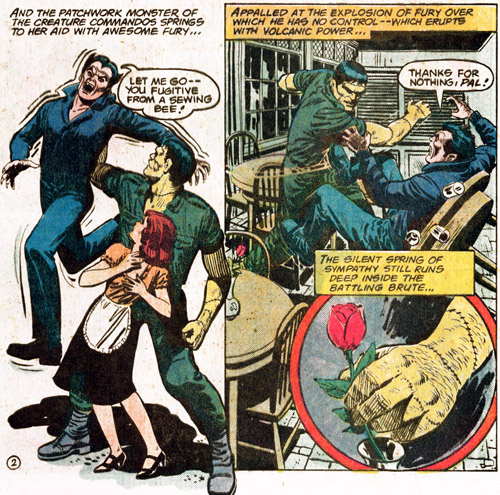 The girl gets a rose, the stitched-up monster gets a peck on the cheek. Everyone gets called a freak by Lt. Shrieve (dubbed "the greatest monster of the four"). The boys bring Velcro to the restaurant kitchen and he bleeds some dead chickens. Then it's back to base. The mission: The Germans are blitzkrieging a Panzer division down the French countryside, protected from air assaults and artillery by a dense, unrelenting fog. Fog... monster movies... yeah, our only hope is parachuting in the Creature Commandos.

(My Time-Life books on World War II have conveniently left this stuff out.)

Flying over the fog cover in a bomber, the plane first drops half-a-dozen bombs on the area, but one gets stuck. It could blow the plane. "Lucky", possibly suicidal after getting hazed for not being worthy of barmaid attention, makes the ultimate sacrifice. And there has never been a sadder Dr. Strangelove moment. 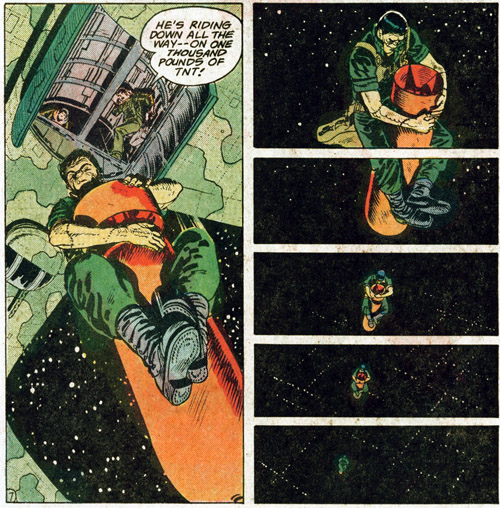 No time to grieve (as if they would, these Project M guys are jerks), the bomber takes enemy fire and the Commandos bail out. The pilots don't make it out-- 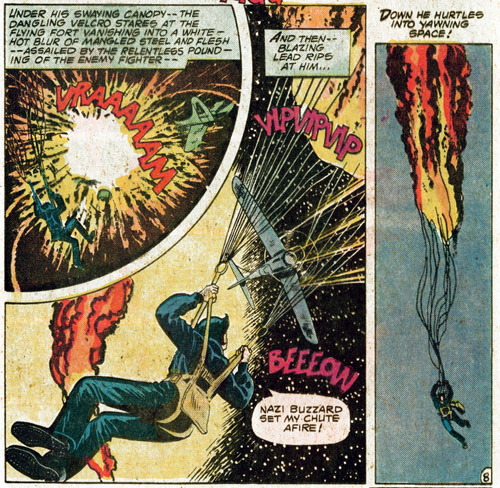 Don't worry about Velcro, he can turn into a bat. A bat who easily gets into the German ace's cockpit! 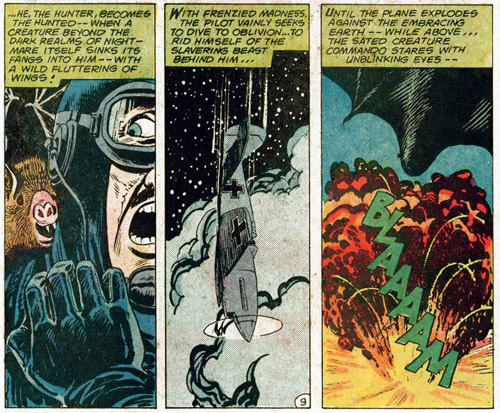 Oh man, I guess he didn't ruin his appetite on chicken'n'salmonela. He rejoins the rest of his team, including Lucky who pulled his shoot before the bomb hit, the drive to survive very strong in him in spite of everything (you could say that's the Frankenstein story in a nutshell). He can't really tell them how he made it, of course, but Shrieve pinching his cheek and calling him good boy is the more harrowing part of this. Anyway, good thing he survived, cuz he's able to rip the tracks right off a tank and beat the Panzer with it. 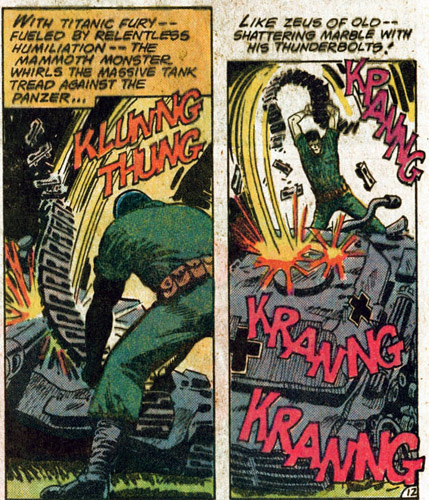 Their actual goal: Put a bomb on a dam so it floods the whole valley and the Panzer division with it. It blows prematurely (Shrieve, you idiot) and off everyone goes... 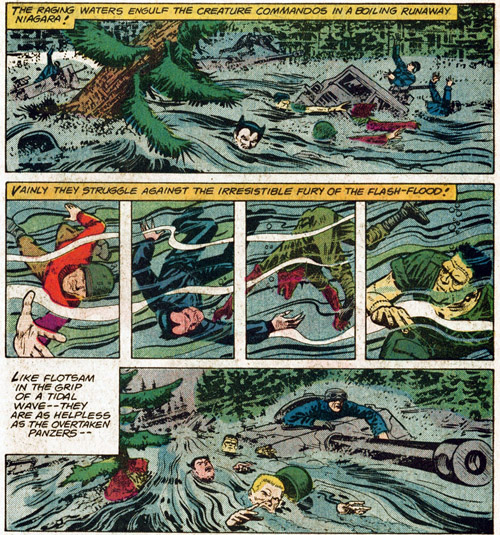 Obviously, they make it out. You can't keep a good monster down, even that human one.

The Creature Commandos are too hard core for Silver Age war comics, but were created a little too late to take advantage of the 70s horror craze. They had a pretty good run, all things considered, the high concept sustaining many installments over three years. I just wish they were more, I dunno, likeable? Shrieve is particularly nasty, but if he's going to be the "real monster", then give Velcro a little humanity. Or like the Suicide Squad, at least a sense of humor. Griffith hopes to be cured some day and is sympathetic, but this particular tale does nothing with him. Lucky comes out of this story as an engaging character worthy of our empathy, but since he can't have dialog, he's limited. So when more recent continuity replaces him with the more literary "7 Soldiers" Frankenstein, it's an improvement. And yet, ironically, he's the only one I would save from this story.

Who's Next? A crazy talk show host.
Comics Who's This?