Who's This? A crazy talk show host. 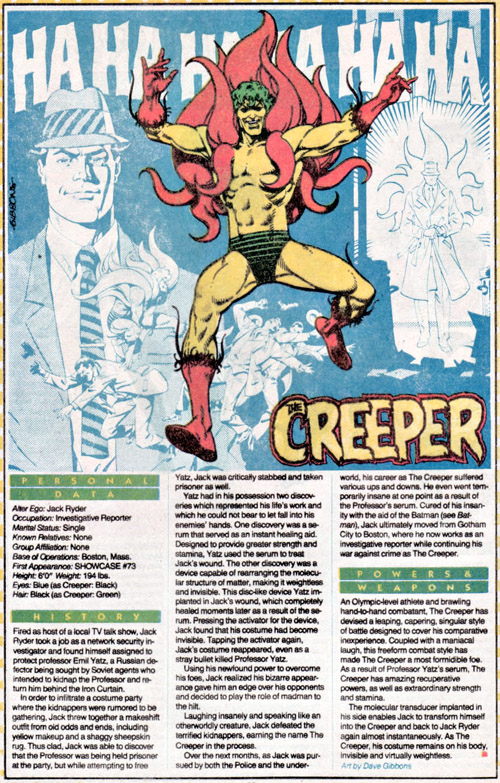 The facts: Launching out of Showcase #73 (April 1968) by Steve Ditko and Don Segall, the mad-looking hero went on to star in Beware the Creeper later that same year, for only six issues, before moving on to sporadic appearances for the next 20 years, often as a Gothamite and ally of the Batman. Only after Crisis is he portrayed as being insane in his Creeper form, but no series comes out of his re-origin (in Secret Origins #18) and he is seemingly killed in Eclipso #13 in 1993. By 1997, he's gotten over his dismemberment, enough to star in 12 issues of The Creeper. In 2003, a new female Creeper is introduced in Beware the Creeper vol.2 under the Vertigo imprint (5-issue mini), and Jack Ryder is back in 2006-2007 for another 6-issue engagement. Reign in Hell briefly portrayed the Creeper as a demon possessing Ryder, and in the New52, it was an oni spirit doing so, but Rebirth has returned the character to his more human origins.
How you could have heard of him: The Creeper had a stand-out appearance on the New Batman Adventures (voiced by Jeff Bennett) and of course appeared on The Brave and the Bold (voiced by Brian Bloom). He missed his chance at the big time, however - there was, at one time, a solo animation project in the pipeline for him, but it morphed into Freakazoid.
Example story: Beware the Creeper #2 (July-August 1968) "The Many Faces of Proteus!" by Dennis O'Neil (as Sergius O'Shaugnessy) and Steve Ditko 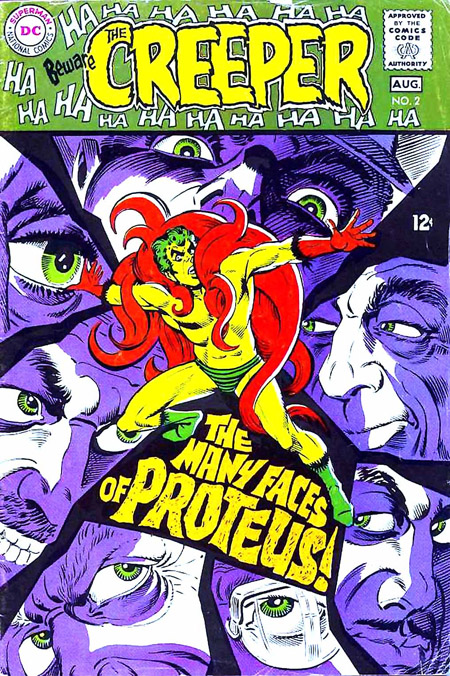 Our story begins with Jack Ryder at his television station snickering to himself as a special broadcast is about to go about claiming it knows something about the mysterious Creeper. He's appropriately shocked when the Creeper puts in an appearance in the studio. 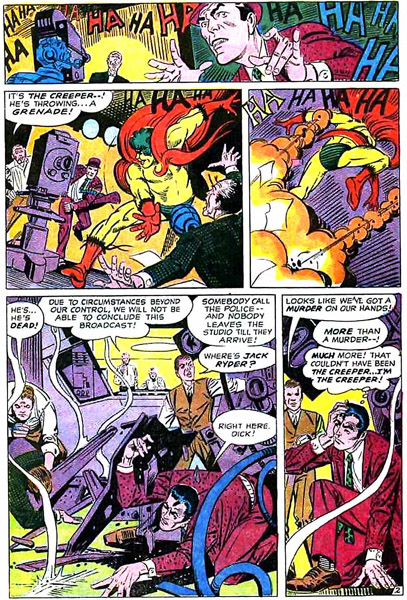 Wow, Creeper actually killed a camera man. But of course, it can't be the real Creeper. I DID notice the cover mentioned a villain called Proteus (Proty should sue), a character who actually tangled with the Creeper through most of his series here and another in the future. It seems that at this point, Ryder is the "Permit Network security agent" and his boss puts him on the case. According to this J.Jonah type - don't believe me? check it out... 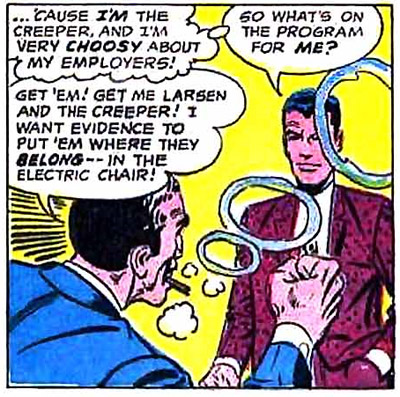 ... - they were about to reveal that the Creeper works for Legs Larsen, the Syndicate racketeer, so obviously, he flounced in to stop the show. Jack also has to deal with Vera, an actress who, for publicity reasons, tells the world she's to be the next Mrs. Ryder, and she's blackmailing Jack into escorting her to events, etc. The pre-teen reader will find it quite relatable that Jack wants nothing to do with her. Adult me is going to steal his snarky remark: "Vera is just what the doctor ordered - a pill!" Okay, on with the investigation!

Gaining entry to Legs Larsen's estate is done with FISTS, and Ryder doesn't even turn into the Creeper to beat up a couple of goons. But once inside, stealth be damned, he changes into his madcap persona: 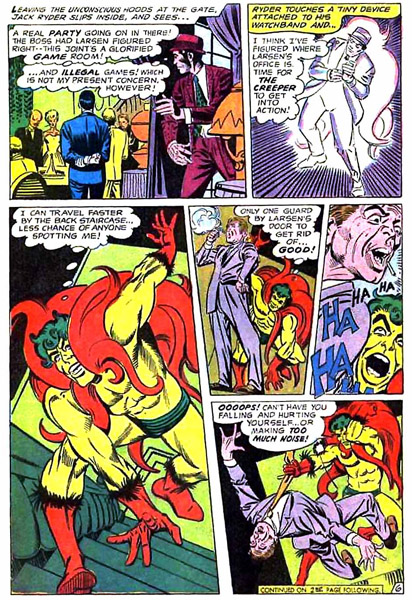 And with that crazy laugh, there's definitely no stealth. He still manages to get into Larsen's office (nothing special about his legs, sadly) and question him severely, but the mobster is gunned down by a hooded figure - Proteus! And out he immediately goes, using a self-sealing escape hatch built into the wall. Creeper can't follow and has to ditch when the rest of Larsen's guys bust in to protect/avenge their boss. 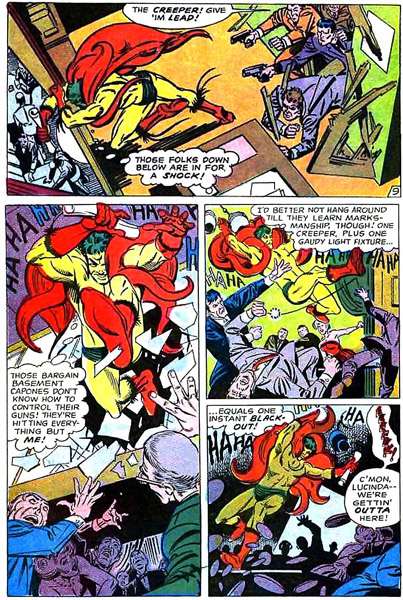 Imagine it. You're just trying to enjoy a night of illegal gambling (as you do) and a cross between the Joker and a furry jumps out of a two-way mirror right onto your craps table. Poor Lucinda. How will she prove which chips were hers? Creeper changes back into Ryder and makes like a guest and escapes in the panic (with Larsen's papers). Insta-Change is a more useful power than advertised. New mission: Find this Proteus fella. If Batman uses fear against criminals, Creeper positively weaponizes it. 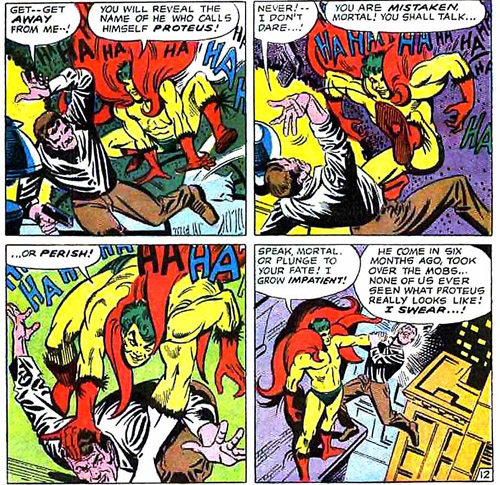 I think it works because it feels like anything could happen to you when this clown shows up. He's violent, he's laughing hysterically, he's throwing terms like "mortal" around, he comes out of nowhere and you have absolutely no time to think or evaluate. Jack doesn't squeeze much out of his victim before the cops show up (he IS easy to "spot" in those colors). When he gets back to the office, his boss calls his conclusions about a state-wide mob a hoax and storms out, and Ryder realizes he was probably talking to Proteus. Indeed, the face-changing villain has the real Bill Brane tied up in an apartment a few blocks away. But Jack has followed him there, rushes in and punches him in the face... which feels like a mass of putty. Proteus fights back and knocks Ryder back before fleeing. Jack races to his own place where the Larsen papers are stashed and finds Vera in the hall - but is it the real Vera? She's so cold toward him that she can't possibly be. 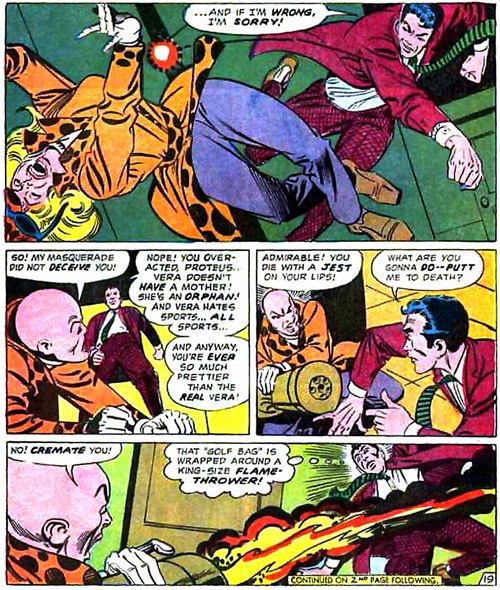 Shouldn't have brought a bag of golf clubs since Vera hates sports. Or maybe he should since it's really a flamethrower. Did Proteus just burn down Ryder's apartment building? Looks like it. He has to escape by turning into the Creeper and bouncing off roof tops. He catches up to Proteus eventually, on a page that is quite unlike anything else in the comic. 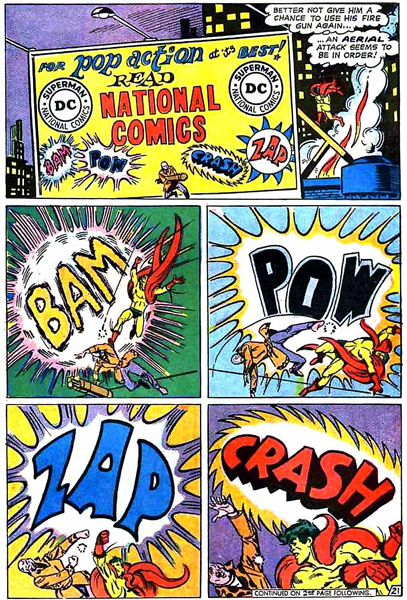 Like, I thought it was an ad! I don't think of Ditko as a "gun guy" despite many of the fun acrobatic heroes he's associated with (Spider-Man, Blue Beetle, Creeper, Speedball), but this was fun. Proteus ends up falling through the burning roof to his presumed death. The Creeper is exonerated. Jack Ryder manages to avoid Vera twice more (no word on his apartment hunting). And in the building's rubble, Proteus rises again!

Final analysis: Beware the Creeper obviously stole elements from Spider-Man, and Ditko certainly likes to give the non-costumed persona a lot of action, but this issue was certainly dynamic and action-packed, Jack Ryder's supporting cast is well-defined, and the story was ultimately quite fun. The question remains: Would I rather have a Creeper persona with its own, loony personality? Or does it work better as a put-on? Jury's still out.

Who's Next? The evil Justice League.
Comics Silver Age Who's This?