Who's the Crime Syndicate?

Who's This? The evil Justice League. 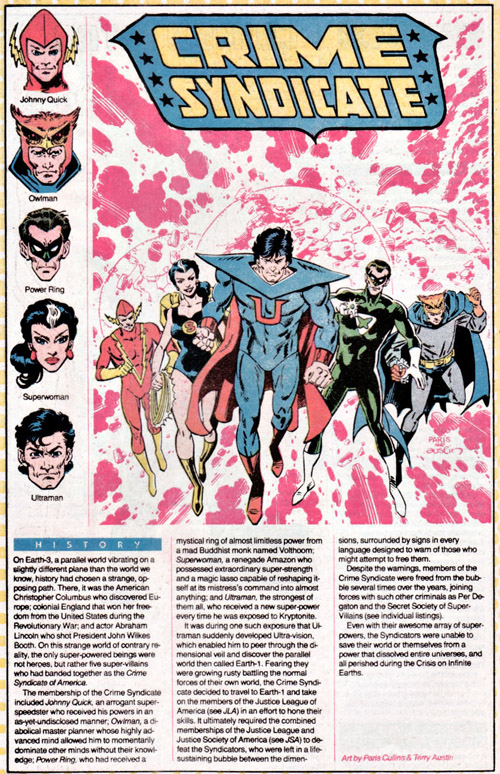 The facts: The Crime Syndicate (of America) makes its first appearance in Justice League of America #29 (August 1964) as a morally-reversed JLA from the topsy-turvy Earth-3. Though analogs of five of the Justice League members, they were not alternate versions of those people (for example, Ultraman is not an evil Clark Kent). They appeared several times in JLA and more rarely, other titles, before their world was destroyed in Crisis on Infinite Earths #1. In 2000, Grant Morrison gave us JLA: Earth-2, which featured a nearly-identical Crime Syndicate from the anti-matter universe of Qward, which would appear in various JLA comics over the next decade, as well as the Trinity weekly series. After Flashpoint, the Crime Syndicate of Earth-3 would become a concern again as of Justice League #23 (October 2013), and grow its membership substantively.
How you could have heard of them: Still around after Infinite Frontier, the "CSA" recently appeared in Suicide Squad (after figuring in the team's Future State story), leading to an event dubbed the "War for Earth-3" which absorbs a few of the Syndicate's members into the Squad. The group also appears in the animated Justice League: Crisis on Two Earths release.
Example story: The Secret Society of Super-Villains #13-14 (February-May 1978) "One Earth too Many" and "Crisis on Earth-3 (Reprise)" by Gerry Conway, Mike Vosburg and Bob Smith 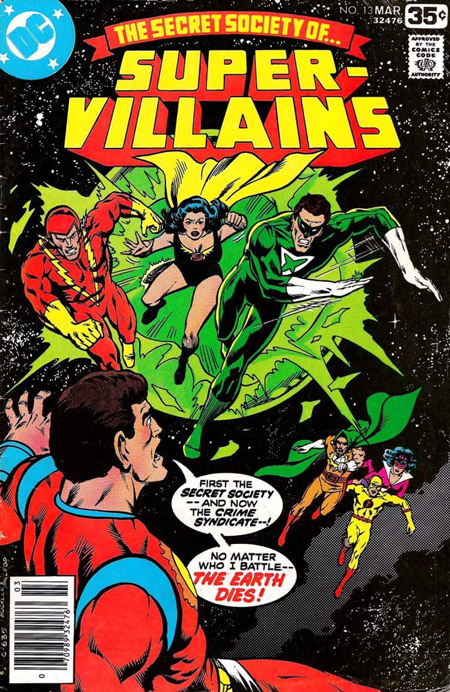 Granted Ultraman and Owl-Man aren't in this story (except in flashbacks), but I really wanted to see the original Crime Syndicate in a NON-JLA story. So Super-Woman, Power Ring and Johnny Quick it is. Set-up: Following the Wizard and his Secret Society of Super-Villains through the interdimensional barriers who seek to journey to Earth-2, Captain Comet and the Society itself are swept up by an energy surge and end up on Earth-3 (thw address is very close, easy mistake). Their trip accidentally weakens the prison of the Crime Syndicate allowing those three members to escape. 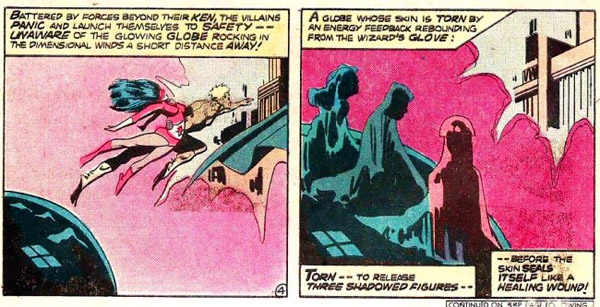 Oooh, that's creepy. On Earth-3, the SSSV freaks out that nobody on "Earth-2" knows who the Wizard is (sounds like he exaggerated his Q-rating), but same difference as it's not Earth-2. The Earth-3 villains come home and are immediately stymied by the likes of the Floronic Man, Professor Zoom and Blockbuster and choose to run. This does NOT look good, let me tell ya. Smarter villains would have made the connection between Zoom and the Flash - y' know, VISUALLY - and expected his speed, for example. 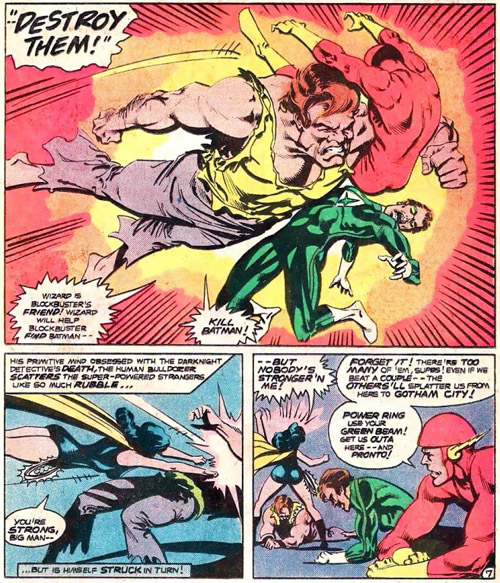 The trio teleport via "green beam", ostensibly to Gotham-3. Coincidentally, that's where Captain Comet ends up and, given the population's reaction to "yet another super-villain" (they've never had heroes), he brushes up on his Earth-3 lore on microfiche at the public library.

The Wizard has done his own research, and concluded that if they have three tokens of power, they can pierce the dimensional barrier again and finally reach Earth-2. Those tokens? Super-Woman's lasso! Power Ring's, uhm, power ring! And Johnny Quick's speed helmet! (Who's Who's writers either missed this story or chose to ignore it because Quick's powers are listed as coming from an undisclosed source.) The Wizard even uses his abilities to hack the power ring and send the Syndicate a challenge to "meet us separately". If the Syndicate has any common denominator, it's that a life of unchallenged tyrannical rule over their Earth has made them cocky enough to accept the invitation. First bout: Johnny Quick vs. the Floronic Man (at this point, "Plant Master"): 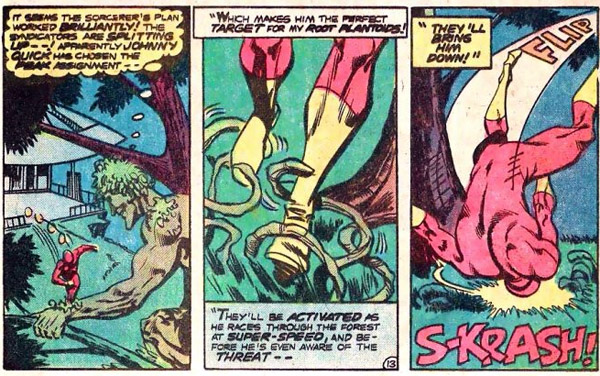 Well, that didn't last long. Zoom then takes care of Power Ring, and Super-Woman is knocked out by Blockbuster (under Star Sapphire's direction). They get chumped in the worst way. How did these mooks ever go up against the Justice League? The SSSV carry out their ritual and off they go to Earth-2. Captain Comet arrives late to hitch a ride, but just in time to fight a vengeful Crime Syndicate. But wait, weren't they robbed of their powers? For the answers, we have to jump to the next issue...

Jump successful! And I didn't even get lost on the wrong Earth in the process. To answer my own question, it seems that Johnny had a spare helmet (so what's he complaining about? the color?!), Power Ring has a lantern through which he can channel the same powers (this is new), and Super-Woman flies and has some measure of super-strength (she IS a renegade Amazon, after all). 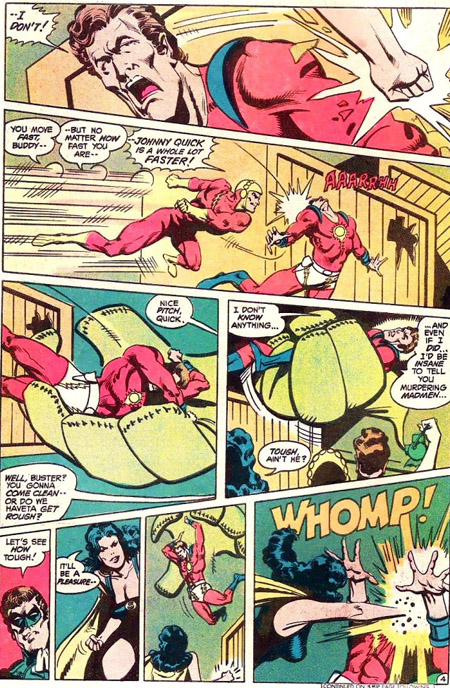 Getting no answers from Comet, they go home and he is ultimately found and brought to the hospital by the Lois Lane of Earth-3! And there's something about the idea of super-hero that just TURNS HER ON! (Gerry Conway's words, not mine.) A Lois by any other Earth, I guess. Meanwhile, the Crime Syndicate steals a solid gold Cadillac and commit a score of crimes to refinance their operation, telling the world they're back, baby! But...

I don't know what Parallax nonsense is in that lantern, but it sure gives people the spins. And by the time Comet is back on his feet, they've turned into "mutants" and are attacking the populace. With his mental abilities, he tracks the source to the lantern, currently at the Syndicate's mountain HQ. Not surprisingly, Johnny is the first to respond. 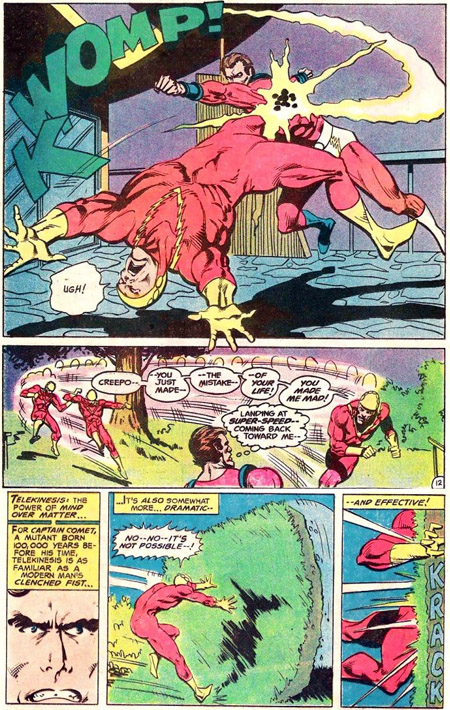 But if Comet easily knocks out Super-Woman this time, it's really because the power battery leakage has made her ill. Power Ring, on the other hand, is already on stage 2. 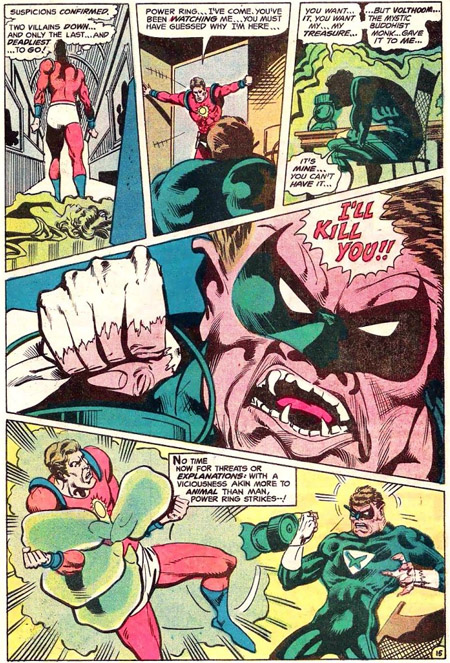 Comet uses his telepathy to struggle for dominance over the power battery, and wins. Then he turns everyone affected back into their human selves, including the Syndicate which he sends back to their interdimensional prison. His greatest feat of will, however, is not taking advantage of Lois-3's affections, presumably because he has to look Superman in the eye later.

It's not a great showing for the Syndicators, but then it's always felt like Ultraman and Owl-Man were carrying the team. This sad chapter might well bear this out. Heck, Super-Woman didn't even get to transform her lasso into shapes like some kind of villainous birthday party magician. Coolness factor of Who's Who entry vs. actual field experience... the gap is dramatic.

Who's Next? DC's first masked hero.
Comics Who's This?