Who's the Crimson Avenger?

Who's This? DC's first masked hero. 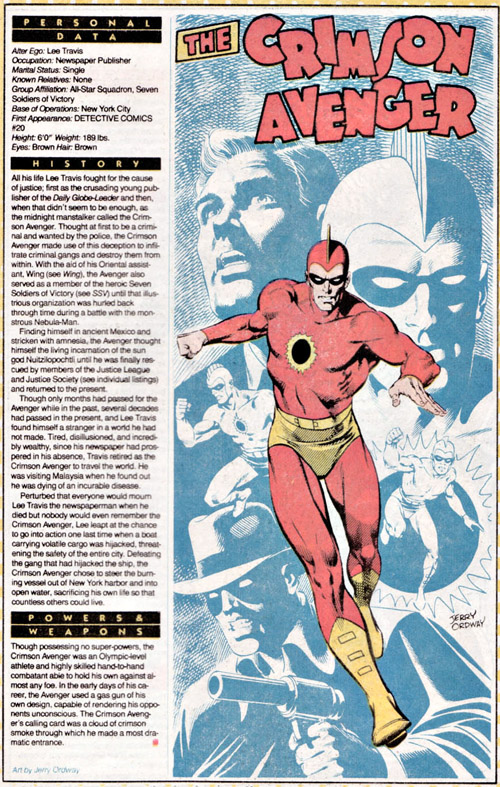 The facts: The Crimson, as he was originally known (though his strip was called The Crimson Avenger) was created by Jim Chambers and first appeared in Detective Comics #20 (October 1938), 7 issues before Batman, making him, yes indeed, DC's first masked hero (that Superman fellow didn't cover his face). Lee Travis was essentially a pulp hero, closest to the Green Hornet, what with his Chinese manservant Wing fighting crime alongside him, being a newspaper publisher, and the gas gun he used (also predating the similar Sandman). In Detective #44 (exactly 2 years later), superheroes were too popular not for he and Wing to don a spandex costume, and a year after that joining the 7 Soldiers of Victory in Leading Comics #1 (December 1941). He continued to be a feature in Detective until issue #89 (July 1944); his role in the 7 Soldiers outlasts the strip by almost a year. Mostly used in stories with the rest of his team, and given a death in DC Comics Presents' Whatever Happened To feature, it was Roy Thomas who brought our attention to him in the 80s, not only in All-Star Squadron, but in an early issue of Secret Origins, which served as impetus for a 4-issue mini-series in 1988.
How you could have heard of him: DC Comics would later use his status as the first masked hero to make him a legend among the superheroes, his cloak, mask and gun special artifacts in superhero culture. He also appears (but does not get lines) in the JLU animated series, and gets a cameo in the Stargirl TV series. A new, African-America, female Crimson Avenger - Jill Carlisle - was created in 2000 and served in the JSA of that era.
Example story: Detective Comics #22 (December 1936)  "Wanted, Dead or Alive: The Crimson Avenger" by Jim Chambers 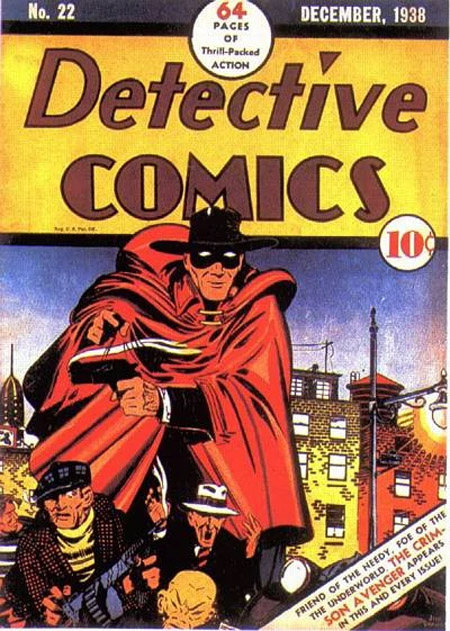 Going back, way back, to the Golden Age and a rare cover spotlight on the cover of Detective, Lee Travis' third story is as good an example as any of what his strip was like. Something else the Crimson has in common with the Green Hornet is that the police is after him, and Lee Travis plays along. Why else would his paper offer a 5000$ reward for the Crimson - dead or alive? 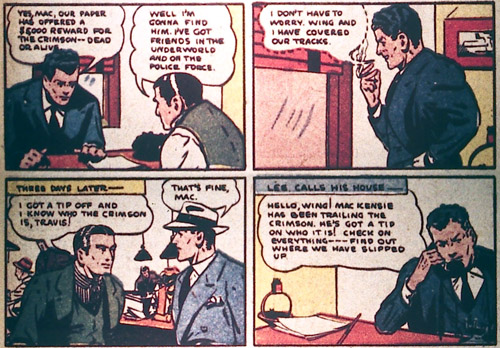 Does Lee Travis really think he and Wing slipped up? That Mac was taunting him by telling him he knew the mystery man's identity to his face? Out of the blue (cough), we're told that there's a leak at police HQ, and indeed we later see Mac get his "info" on the Crimson from a sergeant Haines there, the same sergeant who then pumps the D.A. for information on the case. So he's been selling confidential information, and not just about the Crimson Avenger. Or maybe he just wants access to the D.A.'s safe so he can get the list of possible leaks which probably implicates him. Six pages isn't a lot to work with, so the details are fuzzy. But it's even worse. Haines runs a criminal gang! 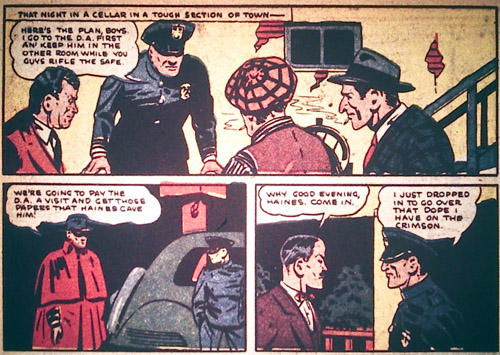 The Crimson also wants to see to look in that safe, because Haines' supposed info on the Crimson has been put in it for safe-keeping (that's what safes are FOR!), so now the two are at cross-purposes. I'm not sure there's much of an emergency for Haines, because by the D.A.'s own account, he doesn't know just WHO is taking bribes at the station and it would seem weird that it would have Haines in his house looking at them if he were on the list. Regardless, while Haines entertains the D.A., his gang slips inside through a window and blows the safe open. Haines is going to act like it's the Crimson who's done it, of course. 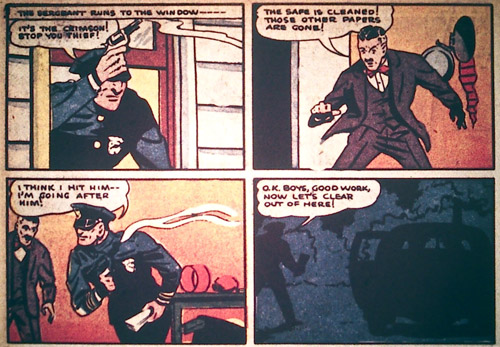 Haines may SAY he's going after the Crimson, but he's just making his escape and it's the Crimson who's after him. It's useful for a superhero to have a chauffeur because then your hands are free.

This Secret Origins cover was wrong to keep Wing out of it, but the homage is clear. 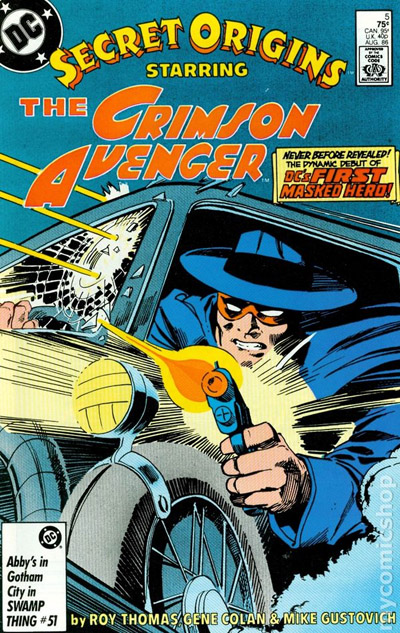 As in that Secret Origins story, and somehow also every Crimson Avenger story from this era I've ever read, Travis causes a car accident that puts the criminals out of commission (I kid you not, this happens A LOT). 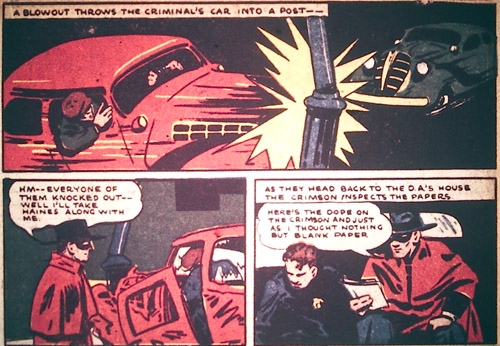 As for the secret identity problem, Haines' papers were blank! It was just a ploy to get the D.A. to show him where his safe was. The Crimson delivers Haines to the D.A., telling him he was the mole. A caption asks if this will clear the Crimson's name, but I bet it didn't.

These Golden Age stories are quite simple, and indeed, derivative, but I still like them better, at least visually, than the spandex years, which are no less derivative and rob the Crimson of what made him unique in the DCU (if not in the wider world of pulp). Of course, modern writers will be more strongly attracted to the early career of the Sandman, who I fully admit is the better version of this concept.

Who's Next? The king of Gotham's sewers.
Comics Golden Age Who's This?