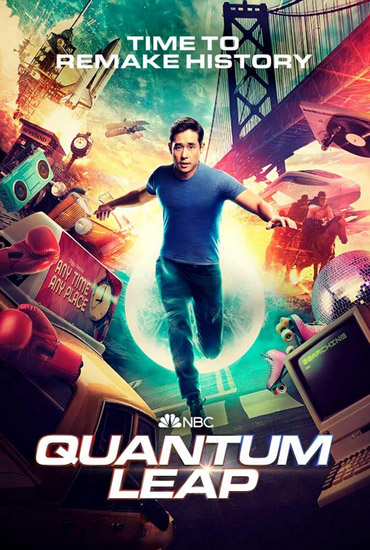 NBC premiered its new and long, long, lonnnng-awaited Quantum Leap a couple weeks ago, and after two episodes (the third airing tonight), I think I have enough of a sense of the show to weigh in.

This is not a reboot! It is a continuation, the Project re-initiated by a new batch of scientists decades later, and the promise of seeing some old faces again made good on by episode 2. Of course, we lost Dean Stockwell who played Al last year, but he is acknowledged and the first episode is dedicated to him. I would be very surprised if the show didn't at some point find and try to rescue Sam Beckett. It seems pretty clear that this is the hero's secret mission, but I'm getting ahead of myself here.

TV has changed since the strictly episodic days of the late 80s-early 90s, so I am absolutely not surprised that Project Quantum Leap is given a life of its own. Instead of 2 characters to follow and an occasionally recurring ones, we have a half-dozen principals and a reason to follow them week to week. The Leaper may be setting right what once went wrong in different scenarios week-to-week, but the main team has figure out WHY he jumped into the accelerator, what this has to do with Al's daughter, and why the Leaper's fiancée and hologram wasn't in the loop. Yes, it's the old conspiracy trope that genre television so often falls into (gee thanks, X-Files), drip-drip-dripping information every episode at a tedious pace. After two episodes, it's not so bad here, but one wonders how they can keep it up unless the show is ready to break from formula more than it seems it would.

The Leaper is Dr. Ben Song, yet another genius physicist, played by Raymond Lee, and... he's fine. It's hard to beat Scott Bakula, if not impossible - no one is going to see more sincere and genuine - so I wish they'd gone with someone much more different. At some point, it was rumored that Sam's daughter was going to be a Leaper (which perhaps morphed into Al's daughter being involved), and in the show, Song was supposed to be the hologram to his fiancée Addison (Caitlin Bassett). A woman as Leaper would have given us very different stories and opportunities, and the comparison wouldn't have been as easy to make. The legacy angle would also have worked for what I think they're doing here. But instead, a man steals the Leaping spot from a woman, and I don't love the optics.

We're also missing the Al factor. Sure, there's potential in the dynamic. The amnesiac Leaper doesn't recognize his bride-to-be, who is sure to witness him having romantic interludes in the past. This harks back to Sam's wife being revealed as a member of the Project, though Al can't talk about it, or if he does, Sam won't remember on the next Leap. But it makes the show much more serious. Al wasn't just a guide, he was comic relief. Addison is as far from that as can be. Mason Alexander Park (who is having a good year, also playing Desire in Sandman) is much more Al-esque and would have brought style and humor to the role of hologram. Instead, they are stuck playing computer expert. Good thing we spend time with the Project then! This group also includes security expert Jenn Chou (Nanrisa Lee) and administrator Herbert 'Magic' Williams (Ernie Hudson). Deborah Pratt still plays the voice of Ziggy.

With a show like this, you have to navigate the new and the nostalgic, and this is where things get difficult. I'm not sure they identified what needed to stay the same, or to change, entirely correctly. So the opening narration isn't good and the Leaping effect is kind of fussy, despite being iconic (they also need to get better with the mirror scenes). Worse though is the type of stories they go for. Clearly, you don't want to tell the SAME stories, even 25+ years on. One thing that makes sure of it is that the Leaper is jumping through his own lifetime, which means 1985 is probably the earliest. This is a very different era from the one Sam was stuck in. However, the reason Quantum Leap was a crossover hit is that it told human interest stories. This new Quantum Leap is going for high concept adventure stories like heists and space missions. If it were a LITTLE more bonkers, I might respect that more, but as it is, it's too divorced from the original's core concept, and not enough.

Not sure what I should expect from network shows these days - all the cool stuff is being done for streaming platforms - but there's no real ambition in terms of effects or writing. Just junk television, which I would argue the original Quantum Leap wasn't. At this point, it may be true to say that I'm only sticking to it in case Bakula returns.
TV