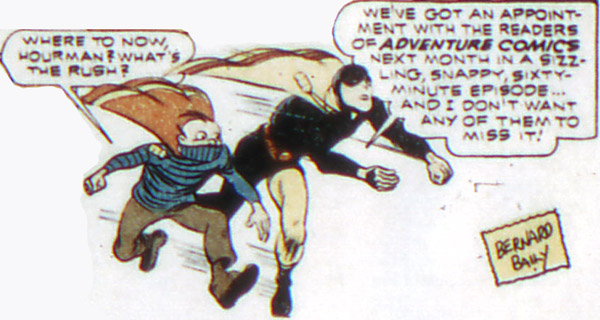 From Hourman: "The Man Who Played Death" by Bernard Bailey, Adventure Comics #78 (September 1942)

Hourman's most recent sidekick is now sharing the byline and the strip is called Hourman and Thorndyke. Who?! Thorndick Thompkins is another of these mostly forgotten kid partners, one of Hourman's Minutemen who take a Miraclo pill that only lasts a minute (Hourman - pusher to the superheroes - I bet the first taste was free). He's recently taken over the job from Jimmy Martin, but had been around for almost as long. While Jimmy looked like a normal kid, Thorndyke is an oddball, hiding his mug with his turtleneck and sporting some kind of pattern baldness.

And when I say "mostly forgotten", Thornedyke returns to the DC Universe in 2000 where he appears as "Second Sweep", a member of Old Justice. Digging through old comics, sometimes you find gold nuggets!
Comics Golden Age One Panel