What a Card: Gem

Being a look back at cards from the Star Trek CCG, and what I thought of them back when they were fresh and new... in EPISODE order. A couple more stray cards from the third season. The Empath gives us one... 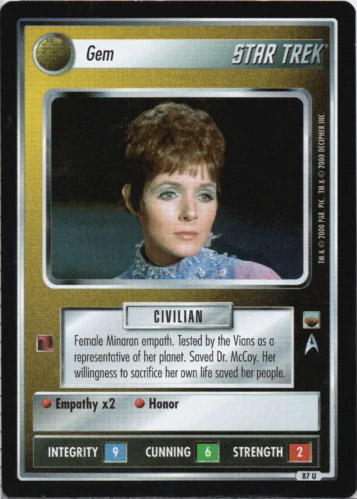 PICTURE: A simple headshot with little or no background (but then, the episode didn't really feature any either), and its success hinges on two things. One is how much you like pastel hues, the other is how pretty you think Gem is. A pretty clear close-up from TOS, it deserves its 3.4.

LORE: The repetition of the word "saved" is unfortunate as "healed Dr. McCoy" could have worked just as well. Better even, since I think her powers are more than a little vague as phrased. We do get her species and all the backstory we need, so it's close to the edge at 2.8.

TREK SENSE: The Minarans were unknown to the Federation, so should be Non-Aligned. Gem herself was a Civilian in both appearance and attitude and yes, an Empath. Now, Empathy has unfortunately become the place to dump all psionic abilities. Empathy for Empathy itself or a similar limited ability, and Empathy x2 for full-blown telepathy or some other psionic power of note. Gem wasn't really a telepath, but a true empath, yet she did have that healing ability. But is this really Empathy x2? I would rather have had an Empathy x1 personnel here, with a special skill that could heal personnel (turn mortal wounds to stuns, for example). As is, there is no hint of her healing powers at all. Honor and high Integrity are supposed to be covered by her sacrifice for McCoy, and though it took her a while to make the choice, she did make it in the end. I'll give her that. The low Cunning certainly didn't help in her decision-making, and perhaps her being mute disadvantages any Cunning idea she might want to share with her Away Team. If it's naïveté, then Youth would have been appropriate. The dismal Strength, I think, is well deserved, though her resistance when taking in wounds might warrant more. In battle though, she'd be dead weight. In the final equation, the lack of any healing skill is both non-sensical and a waste. Drops her down to a 2.

STOCKABILITY: Her function is clear. She's an Empathy support personnel useable by all non-Borg affiliations, and an Empath for OS decks. Empathy doesn't really exist for most affiliations unless they do this kind of importing, and at x2, will take care of Letheans and get you on your way to curing Frame of Mind and passing Talosian Cage. By using Assign Support Personnel, you bypass quadrant reporting restrictions, so she's a viable option for Kazon, Vidiians and Hirogen. The Honor is less important, but is often lacking in the same affiliations that are Empathy-free. These same affiliations will also enjoy the super-high INTEGRITY, though the other 2 attributes are definitely dangerous drawbacks, especially STRENGTH! No regular staffing icons, but she can lend AU or OS to those kinds of ships. It's the only real thing making her more interesting than Maques (along with female gender which has to count for something), because his Diplomacy is more useful, and he has generally better attributes. VIP and CIVILIAN have similar values, depending. Boils down to Honor vs. Diplomacy in most cases. Or you can use both to back up that Empathy. Neither is universal after all... Redundancy holds her back a little, but she's still a 3.5.