Who's This? The king of Gotham's sewers. 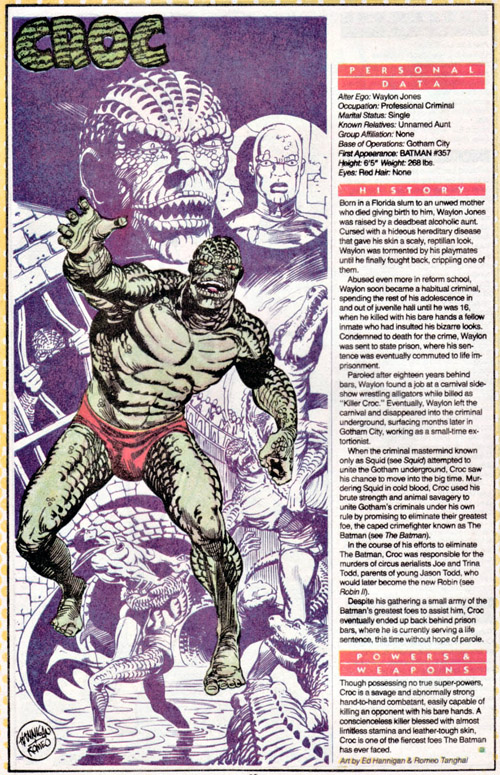 The facts: Given that Killer Croc is now among the Batman villains you'd be likely to rhyme off if asked for a list, it's surprising that his first appearance was only in 1983 (1st cameo in Detective Comics #523, 1st full in #524). He's a Gerry Conway/Gene Colan creation, and as per the entry, was originally just called Croc, adding "Killer" in Batman #359 the very next month (so what gives, Who's Who?). Sometimes just a scaly man, sometimes an anthropomorphic alligator, Croc has since made, literally, hundreds of appearances.
How you could have heard of him: Being on Batman's animated series has a lot to do with his enduring popularity. His appearance in the first Suicide Squad movie, despite his make-up effect winning an Oscar, probably doesn't.
Example story: Batman #471 (November 1991)  "Requiem for a Killer" by Alan Grant and Norm Breyfogle 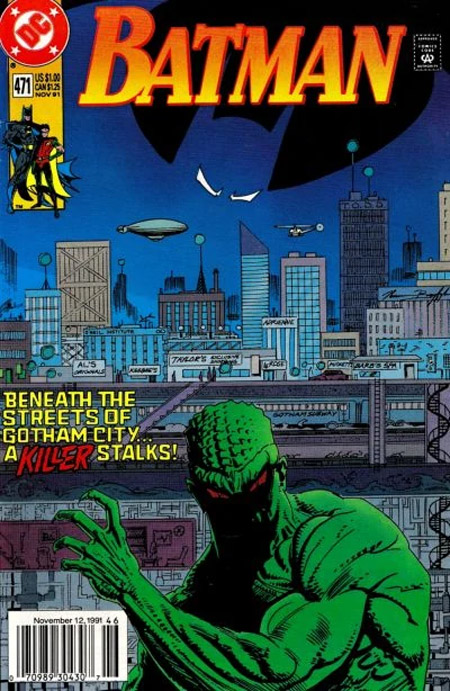 While Croc has been used as a sewer monster, part of the appeal, I think, is that he can also be sympathetic, like a Dickensian hero. Grant and Breyfogle give him nightmares where Arkham and Batman are the real monsters. 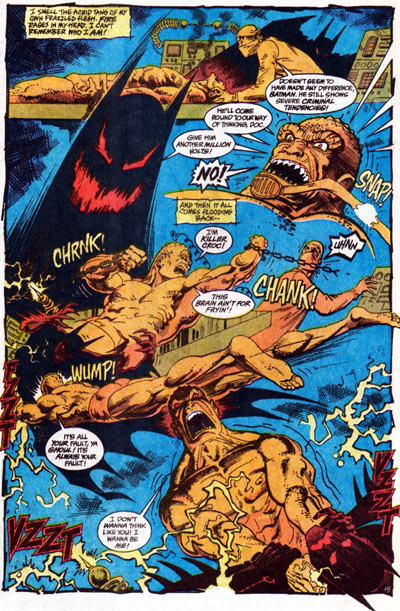 He wakes up strangling one of the many street people who live in the underground with him, but stops short thanks to one lady who sings him lullabies. Not everyone is happy to be living with a super-strong alligator man with severe PTSD, but they do have to admit that he found them a fallout shelter down there, and helps stock the shelves with stolen merchandise from across the city. But not everyone hates him. Some even think of his as a hero. 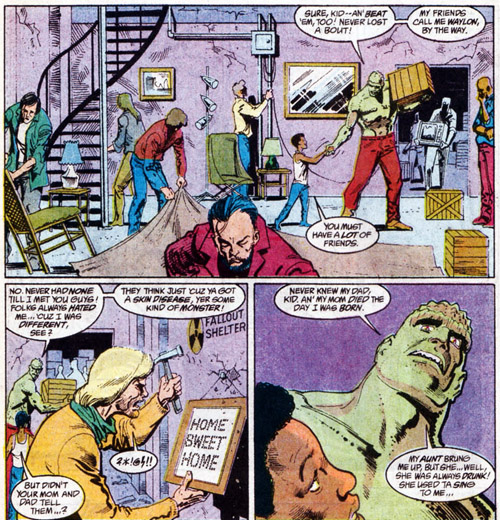 Up above, the Batman is already investigating the mysterious thefts, perpetrated from below. Robin has made an interactive map of every secret tunnel and pipe in Gotham and a recent addition to the post-Crisis Bat Family will do the rest. At the very least, using Killer Croc is worth it just for scenes of Batman working with Ace the Bat-Hound on tracking a criminal through the sewers. 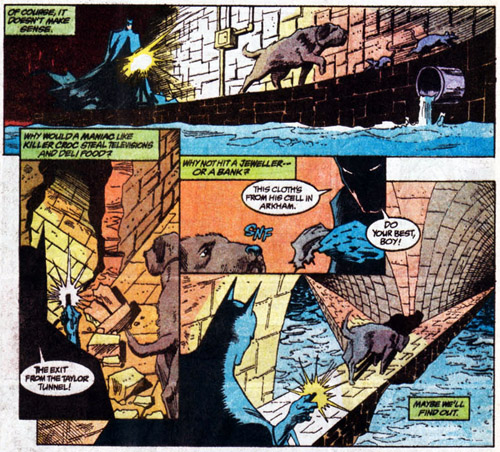 Ace leads him to Gotham's underground highway, a harebrained scheme from the 60s, with never used roads and buildings ready made for the likes of Croc. Ace also saves another dog from an army of rats, but this isn't what we're here for (I mean today, Ace fans should go out and find this issue). And that dog belongs to the kid Croc just befriended and leads the Bats right to the atomic shelter. Croc, returning from a mission to get cable plugged into his hideout, doesn't take this intrusion at all well. 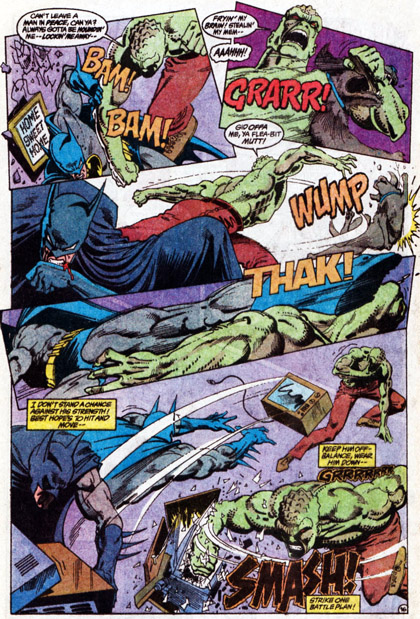 A violent fight breaks out, and even Ace isn't safe! But as this seems to be the pooch's story as much as Croc's, the Bat-Hound gives as good as he gets. 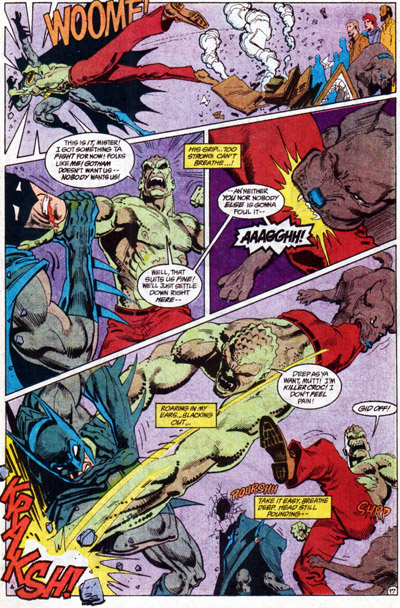 It's not looking good. And then Batman hears a roaring and stops the fight, telling Croc he needs to get his people out of there. The city is opening new water tunnels tonight and the sanctuary is bound to be flooded. Within seconds, it's already sprung a leak and Croc loses no time turning to the task of evacuating the people under his protection. And he's pretty damn heroic, if you ask me. 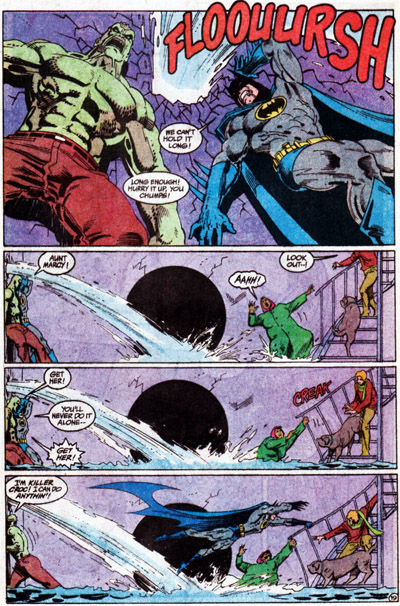 The last we see of Killer Croc, he's being washed away and even Batman thinks "no one could survive that" (he oughta know better) and his friends sing his lullaby to his memory, not a dry eye in the sewer.

Croc can TOTALLY be sympathetic and making him a Floridian Killer Shark type does him no favors. He opens up a whole world underneath Gotham, and all the stories that come with it. When you focus only on his abilities, you just have a dumb bruiser to throw into Arkham escape scenes, and that's when you think, hm, maybe he should really BE an alligator, as opposed to a wrestler with a bad case of psoriasis. Keep him as the king of the underground, and he becomes a folk hero for everyone who has rejected society, sometimes at odds with Batman, sometimes aligned with him. More interesting. At least, I think so.

Who's Next? A Titan who became a Justice Leaguer.
Batman Comics Who's This?