On the occasion of completing reviews on Doctor Who's 13th series, I should like to re-imagine it as a role-playing game campaign using Cubicle 7's Doctor Who RPG. (Go back one, to Out Lockdown Year.) 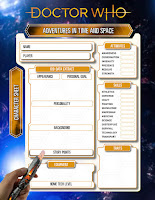 Getting back to it after the lockdown, Chris decides to go for broke and plan out a multi-part story he calls "Flux", which will threaten all of reality and bring his time as GameMaster to a close (or nearly). He's never hidden from his players that he's found prep work to be much harder than he first believed when he took on those duties, something that caused a lot of scheduling problems for the group. He took so long between sessions that some players moved on and he often had to revise his plans to account for a player's absence (or indeed, his players' pleas that he extend the game to a few more sessions). So the pieces aren't all going to fit exactly, but the players agreed that on the whole, the more serialized gaming was a success; it kept them invested. One particular quirk of his serial, however, is that he ends up playing a lot of prominent NPCs, to the point where he's almost a player himself and might have needed a third party to step in.

The Players
-All the players are moving on with Chris, though Jodie finds filing away her Doctor's character sheet harder than most. For her final year, she expects to deal with the Timeless Child revelation and for Chris to throw all her old enemies at her. She wasn't too sure what to do about the curve ball Mandip threw her though...
-Having recently lost the two other players she's consistently been gaming with, Mandip is quick to find a hook to banter with newbie John, but also decides Yaz has fallen for the Doctor. She ends up not pushing it very hard when Jodie's Doctor is left a little dumbstruck at how to role-play her reaction.
-John agrees to play through Flux with the character of Dan Lewis, a proud Liverpudlian who keeps getting knocked on the head by Lady Luck. After Flux, he decides to stick around for a couple games, but bows out suddenly before the end game, as life gets in the way.

Flux/The Halloween Apocalypse. Chris drops a lot of complicated information in the first of his six Flux chapters, providing the players with cut scenes to events their characters are not aware of. How will these stories intersect with the PCs' own? One problem for Chris was a falling out between John B. (who played Captain Jack) and the role-playing club over untoward behavior. He was meant to play this mini-series as its necessary action man and eventual link to one of the villains. Rather than jettison that part of the plot entirely, Chris instead introduces Vinder, and later Bel, creating even MORE cut scenes for the players to listen in on, but not participate in. So the GM introduces a LOT of things, including a dog-like race bound to help humanity, a historical mole man digging tunnels in Liverpool, an anti-matter force that is destroying the universe, a psychic who knows she'll meet the Doctor later, and villains released from the clutches of Division. There's more story-telling than choices to make, but the players imagine it will all come together eventually. 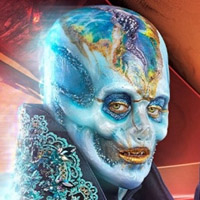 War of the Sontarans. While it's a serial, Chris cleverly divides the adventure in discreet episodes that can stand and be understood on their own. In this one, the Doctor finds history rewritten and the Sontarans (new to Jodie) fighting the British in the Crimean War. While she interacts with Mary Seacole, Yaz meets Vinder in a strange temple devoted to Time, and John fights the Sontarans in the present day with his canine ally Karvanista. The players, though they can't play many scenes together, are stoked to be in a complex web that justifies their being split-up.

Once, Upon Time. Chris' big experiment this year is a sort of Quantum Leap that keeps the characters separated, but the players together. Trapped in the time stream, they (and Vinder) relive various moments in their lives, but after the GM sets things up, he assigns mini-character sheets to other players so they can play other characters in those scenes. So Mandip can be Vinder's superior officer, and both John and her can be Division soldiers working with the "Fugitive Doctor" revealed in the previous go (he gets Jo to reprise the character only in the mirror - i.e. on a quick, pre-arranged Zoom call). It's not something he can sustain in-story, but at least the players have something to do as various characters explore their pasts (Mandip guides an origin story for Yaz, and so on). 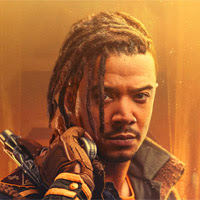 Village of the Angels. Chris envisions the Weeping Angels as agents of Division - his dark Time Lord conspiracy - and puts the players through their paces in different time frames as the Angels whisk people to different points in their village's history. It's all very clever and introduces more NPCs, making use of the psychic Claire and of psychic investigator Professor Jericho who will end up traveling with Yaz and John. Admittedly railroading the players with temporal shenanigans, Chris strands Yaz and John in the early 20th Century, while the Doctor is captured and brought outside of time.

Survivors of the Flux. The Doctor is brought before her "mother" Tekteun who explains the plot, and then the Ravagers show up to immediately change the stakes. Meanwhile, Yaz and John (and Jericho) are on an action roller-coaster, skipping from place to place with each scene, covering YEARS. It's a quest for information either way, and this is where the inclusion of Joseph Williamson early on takes its full meaning - his tunnels lead in and out of different times, so he's their way back. Having recently introduced the Grand Serpent as a villain for Vinder, he pesters the group with more cut scenes, here showing the Serpent taking over UNIT in the past, explaining why the organization hasn't been active in any of their games. 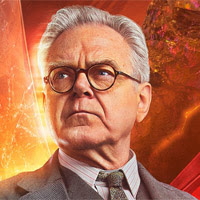 The Vanquishers. It all comes to a head with Cybermen, Sontarans, Daleks, the Grand Serpent, the Ravagers, and an antagonistic incarnation of Time itself bearing down on the Doctor. The GM may have bitten off more than he can chew, but Jodie hasn't. She spends a lot of Story Points and gets Chris to agree to all sorts of tomfoolery using her Telepathy and Time Lord abilities (and what happened in Once, Upon Time) to simultaneously exist in different time frames. She's having loads of fun, finally puts the gang back together, and stops the Flux with a flash of brilliance, using the Daleks, etc. to counter the anti-matter with their own matter. Chris was all ready to shunt the game over to a second universe if the players failed, but marveling at Jodie and her Fam's cleverness, he gives them a break and restores the universe as it was. Though she has retrieved the fob watch with all her lost memories, Jodie decides her Doctor would lock it away rather than be changed by its contents. At this point, they are so enthusiastic (John decides to keep traveling despite his limited commitment), he agrees to quickly design a couple extra adventures before they all say their goodbyes.

Eve of the Daleks. Describing it as Groundhog Day with Daleks, Chris throws the players for a loop - a time loop, that is - allowing them to fail again and again, and giving them less and less time to hack their way out of the Dalek death trap. It provides a nice way to kick off the New Year. It's also at this point that Mandip makes Yaz's feelings for the Doctor known, if not to the Time Lord, to the gaming table.

Legend of the Sea Devils. Chris takes the Sea Devils out of mothballs and sets his adventure on China seas - pirates vs. reptile men. It's a bit of a lark, hastily thrown together, and memorable for Yaz finally fessing up to her crush, and getting rebuffed by the Doctor. 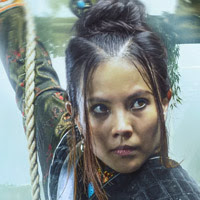 The Power of the Doctor. Sadly, John can only show up for the first segment of play, his bad luck providing an excuse for Dan to leave (at the first sign of an Unadventurous Trait, in fact). As with Flux, Chris pulls out all the stops and proposes an alliance between the Master, the Daleks and the Cybermen/Time Lord hybrids. At one point, Jodie even loses control of her Doctor as she is overwritten by the Master himself (which Mandip/Yaz has to deal with and trick). Jodie still has things to do, however, transporter to the "edge of existence" where she interacts with previous players of the Doctor. Fond of Jodie, Chris has decided to make her departure extra-special by inviting former players (mostly via the online platform), some of which get to play little scenes in the main action as holograms. Peter, Colin, Sylvester, Paul, Jo and Davids B and T all return in some way, as do companion players like Katy, Bonnie and William (who was in the very first group). In the room itself, Janet returns as Tegan and Sophie as Ace, having a grand old time playing older versions of their youthful characters. Oh, and Bradley returns as Graham too. They're gonna make Jodie cry by the end, aren't they? Of course, the climax leads the Doctor to be fatally wounded (by design) so she can say her goodbyes and regenerate. All players hand in their character sheets.

Chris passes the baton back to Russell, who did run a couple short games during the Lockdown and is eager to get back into the game. But he's gonna be prepping a while...

daft said…
For yourself. :D

In retrospect, there were so many plot strands over the course of the seasons that went nowhere, Big Finish will be rubbing their hands with anticipatory glee. :)