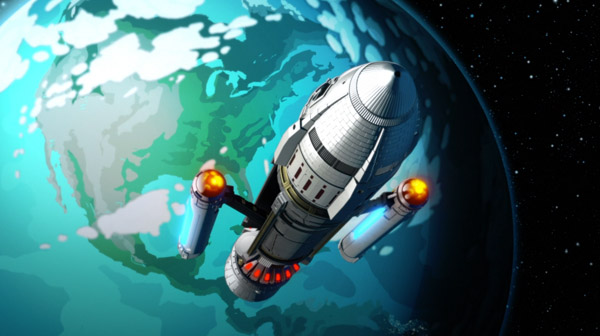 WHY WE DON'T: Did we need Gavin on this adventure?

REVIEW: It's a story that Trek has done before. One of their own is on trial/in danger of being drummed out, and their crew mates break all the rules, even steal a starship, to save them. But in Lower Decks fashion, while the ensigns do try to do that, Captain Freeman is exonerated by bigger fish than they (by a couple of prominent cameos, in fact), all off-screen. Mariner should have trusted in the system, and that system is Star Trek's own TV tropes. It's still quite nice to see her drop to too-cool-for-school mask and show real emotion, but the big take-away we have from seeing Mariner also interact with her father here is that her upbringing might just be why she's so insubordinate. If your parents (and their friends, your "uncles and aunts") are high-ranking Starfleet officers and you grew up thinking of them as regular people and in the case of your parents, rebelling against them when you were a teenager, then their authority is not going to hold as much weight even once you're in the service. By the end, she's punished by being handed off to Ransom, Freeman washing her hands of the conflict of interest.

We can always compare Mariner to Boimler who is instead painted as a young Picard, hating the family business (dried raisins, spoofing the Picard vineyard) and running away from it to the stars. So he too has a difficult relationship with his parents, but unlike Mariner, his aren't likely to be in his work environment. There's a running gag where sexy girls overtly throw themselves at him, but he doesn't see it, the irony being that he'd be a stud if he stayed on Earth, but prefers to be something of a nerdy loser in his chosen profession (cue his embarrassing personal logs, of which he is actually NOT embarrassed). His big (though understated) moment is when Mariner sends her friends away on a programmed shuttle and he redefines its destination, "home", as the Cerritos. For him, it absolutely is.

But behind it all, this episode is about history and I think demonstrates how Lower Decks thinks of itself as a historical show. The big set piece, of course, is the visit to Bozeman, a theme park based on the events of the movie First Contact. We reenact the launch of the Phoenix, complete with music (yes, Magic Carpet Ride, but my heart swelled at my beloved FC score). But when you look deeper, there's a discussion on why the super-future should keep the Golden Gate Bridge around, the ensigns visit Sisko's where the boys wear Jake Sisko fashions, the transporter is manned by a very old officer whose seen it all, the day is apparently saved by Morgan Bateson who is a man out of time, and the news reels reference musician Sonny Clemonds (The Neutral Zone) who is ALSO a man out of time. Indeed that makes you think of all the references and Easter Eggs in this show AS little historical capsules that take you back to older episodes and films. Which is perhaps why I found Gavin the Botanist's little journey, and even the alien breed ground, surplus to requirements. These are the things that didn't really tap into that theme.

LESSON: That potted plants in the future will have automated watering/feeding systems as part of their containers. This is conjecture, but I'm staring at Admiral Freeman's office and I can't stop thinking about the Okudagram screens on each of them.