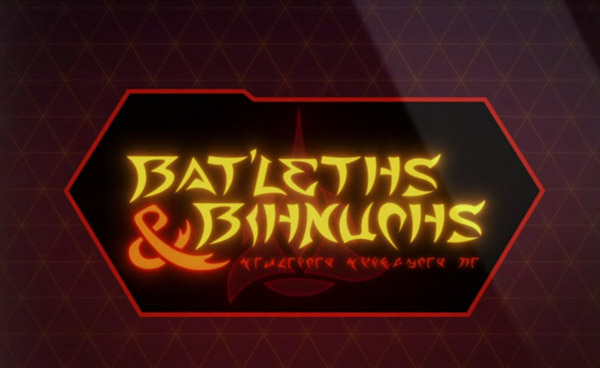 CAPTAIN'S LOG: Mariner learns to work with Ransom and Bold Boimler is born.

WHY WE DON'T: Means less Vendome.

REVIEW: We catch up with our ensigns playing Bat'leths & BiHnuchs, which is less like D&D than it is the old TNF VHS game, A Klingon Challenge. I questioned its existence at first, but if you're a lowly Lower Decks officer, you probably don't have that much holodeck time and interactive board games are probably a good option. Except those Ferengi ones, they're a real scam. Great to see Martok again, even in this form. Through the game, Boimler's lack of risk-taking is addressed (he meets dishonor as a cautious member of House Dormat, read: door mat). Comparing himself to the Bolian character from earlier seasons, Vendome, who is now apparently captain of his own California-class ship, he realizes that he needs to take more risks, or bigger risk-takers will pass right by him.

And so is born Bold Boimler. This paradigm shift for the character is going to get him into trouble all season, getting us away from Mariner having to do it. That's a good thing. In a rare team-up between Boims and Tendi, she advises him to start saying yes to opportunities, and then quickly becomes the one telling to say no when things get too insane. But it works. By following the old improv principle (and I've practiced this, you probably won't be surprised to read - it does lead to adventure, or at least, memory-making), Boimler finds that opportunity breeds opportunity, and the senior officers start to notice him. He may have gone too far by saying yes to the Predator-like K'Ranch, a guest on board who has the instinct to hunt and asks very politely if Boimler would play the part. In a future where super-medicine is on hand, maybe this isn't too big an ask, but it still leads to exciting sequences... and nerve damage. Civilized predators practice catch and release, no worries.

If Boimler is becoming more impulsive, Mariner, for her part, is finally starting to learn to reign her own impulses in. Acting as Ransom's number one (or Number One's number one), she is tasked to work with him to repair a space lift that leads down to a pleasure planet, while the engineers (Rutherford and Billups) spend the day enjoying the resort and dealing with diplomatic issues. It's a terrible idea, of course, but Ransom is doing it on purpose to see if Mariner will use that to go off-book. He's still hedging his bets - low stakes and every chance to switch jobs if things go too badly. And of course, they do. He is personally outmatched in the engineering department - he can't even figure out what the YouTube videos mean - while the engineers make a cultural faux-pas and have to be sacrificed to a sentient volcano. The aliens look like Vaalians (from "The Apple") so it's not a big surprise. They are also run by a sentient computer and a psychic baby, so things are very complicated. But since this is a culture based on wellness and exercise, one look at Random's magnificent bod convinces them to relent. Yes, Mariner did eventually go off-book and jumped out the lift with a parachute, but climbed back up when Ransom finally admitted his mistake and was very impressed with his handling of the situation. He's an insufferably self-absorbed dick, but he got to his rank for a reason. Maybe by taking a few... risks? Anyway, while she complains to her friends, her "yes, sir" attitude just a scene earlier seems entirely sincere. She's growing.

LESSON: Risk is our business, and fortune DOES favor the bold. (Where did I hear these before?)