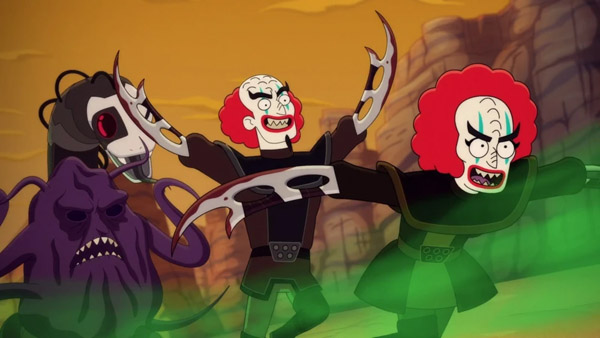 WHY WE DON'T: The fantasies could have had more Easter Eggs.

REVIEW: Lower Decks does the common Trek plot where something makes the crew's fantasies (or nightmares) come to life (I'd say the original is Shore Leave, but one could argue it's as old as The Cage). Down on a planet where a conflict between scientists and the silicon-based locals rages, Mariner, Boimler, Rutherford, and Ransom fanboy Stevens are tasked with disposing of the fantasy rocks while they avoid interacting with their own fantasies lest they be turned to stone. This is where we find out the tension between Mariner and the Andorian Jennifer has blossomed into a romantic relationship, but one Mariner is loathe to put a label on. Interestingly, Mariner may be afraid of commitment, but if she's fantasizing about the relationship she actually HAS, she's pretty committed. Rutherford's Leah Bahms fantasy ties him to Geordi (they were always cut from the same cloth), and allows for the return of Susan Gibney to voice the illusion. Boimler? It's big and adventuresome, but "bold" or not, he sees himself as a perpetual sidekick (that tracks). As a further complication, there's another California-class support ship assisting in the effort, and the three analogs, tasked with something else, are pretty antagonistic, so our guys decide to make it a race... or s basketball game, dunking rocks into the stasis container. And it's only when Stevens gets in on the game that things go wrong, rocks are broken, and nightmares spill out (that also tracks).

What DOESN'T track is the initial antagonist from the Carlsbad crew. If you look very closely, one of their number is a Zaldan, the race you MUST be rude to lest you anger them, as seen way back in Coming of Age (Wesley's Academy entrance exam). But the other two aren't like that. Once all the ensigns are forced into a cave for protection against such amusing sights as Klingon clowns and giant Borg snakes (and Kukulkan from How Sharper Than a Serpent's Tooth - I don't know why there are random blobs or Jennifer turning into a werewolf, I think the humor could have been sharper here), they reveal that they aren't antagonistic at all, but rather view the Cerritos as the coolest support ship in the fleet. It's true that despite the lowly missions, the ship keeps getting drawn into more impressive events. The fact the other Cali-class ships look up to Freeman and her crew makes sense, but neither the acting nor animation really sell this "misunderstanding". The Carlsbad ensigns acted like the Cerritos was an embarrassment and there's no other way to take it. Having bonded, the ensigns go deeper into the cave and find a literal data mine (clever) - the rocks are recording not only fantasies, but passwords, privileged information, etc. They'll have to fight their way out to get back to the ship and warn everyone that they're being played.

So where's Tendi during all this? She's starting her science officer training where she'll be assigned to the captain as the "voice of science". I like that there's a philosophy behind characters like Spock, Data, Dax, etc. Tendi is assigned that silly avian counselor as her mentor, but she doesn't really trust him (nor should she) and it's Dr. T'Ana who provided the right pep talk when things go wrong. It's kind of sweet, especially that last moment where Migleemo takes all the credit, but Tendi looks at her real mentor across the way. Her story does connect to the main one because the Scrubble and the scientists' dispute is mediated by Captains Freeman and Meier (a fast-tracking young buck from the USS Carlsbad). The negotiations just can't properly start because neither captain wants to accept the stone relic the Scrubble bring as a gift and hand it to the other. Freeman's ego is a big part of the problem because she feels Meier is mocking her age, so she reciprocates, but it's a mirror of the situation down below: He defers to her because of the Cerritos' reputation, and she's really just trying to be nice to a younger captain. Except again, the attitudes as acted/animated don't really support the idea of a misunderstanding. It's manufactured conflict. The point of it is that Tendi has more trouble cutting through the noise to tell the captain her findings. When she does - the object has a listening device inside - the rest of the ensigns run in, so it's almost not necessary. Still, she does find the "voice of science" and that's what matters.