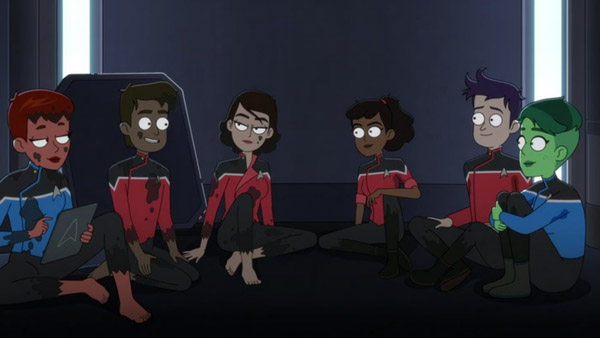 WHY WE LIKE IT: A trip through the bowels of the ship.

WHY WE DON'T: Didn't we just do Bizarro ensigns?

REVIEW: While on artifact clean-up duty, Captain Freeman has been taken over by a D'Arsay Archive (from "Masks")... a couple times! And while it's fun to see the Cerritos deal with stuff the Enterprise-D did as if it were humdrum routine, in Lower Decks fashion, that's not what the episode is about. Rather, it wants to look at the mundane consequences, namely the fact that these events have burnt out the engineering crew. Freeman's solution is to bring the entire department to the Dove, a spa ship that will get your yellow mood bracelets back down to green in no time. Except the engineers are very bad at not working, which drives Freeman crazy (or in Dove parlance, up to red and then black). It's a classic sitcom set-up and punch, and the engineers eventually recognize that 1) finding engineering solutions is how they relax, and 2) they have to fix THIS particular problem before Freeman is sent to Earth for health reasons. Obviously, they build a stress-relieving machine that works so well, the spa manager has it destroyed lest she lost her job. A bit of fun with solid gags, reminding me a lot of the Starfleet Corps of Engineers ebook series. No knee slappers, but I did smirk at the service animal joke (I'm one of those deviant pet people).

Meanwhile, the other three ensigns are really wanting to get quarters on a higher deck, and want to fix the room lottery before those cheaters from Delta shift do so. It's kind of an odd thing having Delta shift look so much like our own Beta shift because they just did that gag in the previous episode with the Carlsbad crew. Delta plans to screw with the lottery computer, so Beta needs to get there first, running through interesting places you never see in the ship. Not saying it costs nothing to create these environments in animation, but it's certainly easier than in live action. So we get to see such places as the swampy basement under the hydroponics bay and the deflector dish room, though most of the trek is through dark conduits. The adventure intersects with T'Ana and Shaxs' Bonnie & Clyde holoprogram (where they routinely have sex - we don't get to learn how she lost her tail, but it's a tease), marks the return of Bold Boimler (who Mariner predicts will be dead before long at this rate), and gives the ensigns hydroponic hallucinations and the animators the opportunity to draw some silly stuff. And they meet and almost-bond with their Delta counterparts.

Again. It happened with the Carlsbad crew too. Except here, Delta shift betray their truce at the earliest opportunity, despite finding some common ground as the two groups sit together waiting for a certain door to open. The rivalry continues. I'm not sure what to make of their shared story about Ransom's churro doll - by which I mean I don't quite get why this is funny - but it's not the only ill-considered moment in the episode. There's also the matter of the girls saving Boimler from the dish by taking their uniforms off and making a tether out of them. I get the mechanics of it, but who in the production wanted this bit of cheesecake? And then there's Rutherford clearly angry at his friends that they didn't secure the room. Seems out of character. Not that he's wrong. Once they found out it was only one room, they chose not to enter the lottery and be split up. Delta shift won the room, unfair and unsquare, but decided to share it. So Beta weren't too smart, but their hearts were in the right place, which I think Rutherford would be the first to understand.

REWATCHABILITY - Medium: Chill in front of this one, but don't ask too much of it.
ST Reviews: LD Star Trek

Jon G Hames said…
Freeman rocking back and forth in the puppy room while the staff worriedly looked for more cute animals got a laugh out of me.
November 30, 2022 at 11:02 AM