The 13th Doctor, Yaz and Dan: The Character Sheets

In the spirit of each successive series seen as a Doctor Who RPG campaign, Jodie, Mandip and John have handed in their character sheets before leaving. 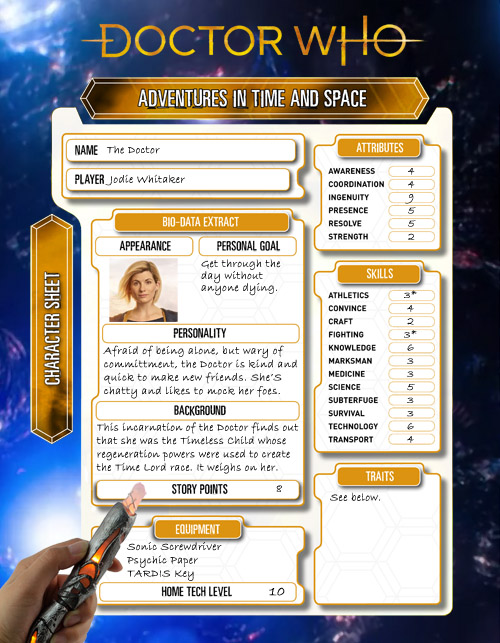 Stuff that didn't fit on Jodie's sheet, kept on the back...

SKILLS
*The Doctor has a +2 Athletics Expertise in Acrobatics, and a +2 Fighting Expertise in Swords and Venusian Aikido.

BAD TRAITS
Adversary (Major) - The Master and more, too many to list
Amnesia (Minor) - The Doctor knows her memories of her lives before her “first” incarnation have been removed
Code of Conduct (Minor)
Dark Secret (Minor) - The Doctor’s secret history is something she keeps from her companions
Distinctive (Minor)
Eccentric (Minor) - The Doctor is socially awkward
Insatiable Curiosity (Minor)
Last of My Kind (Minor)

FAVORITE METHOD FOR ACCUMULATING STORY POINTS
Despite the high attributes and skills, Jodie wanted to give her version of the Doctor feet of clay, so she’s quick to jump to conclusions (by not actually rolling Knowledge or Science, thereby gaining Story Points) and waiting for the GM to reveal the truth (and if wrong, getting out of trouble with those points). During character creation, she and the GM also agreed that if the Doctor faced problems in historical settings because of her gender, she would be compensated with Story Points (this quickly spread to other characters in the group). 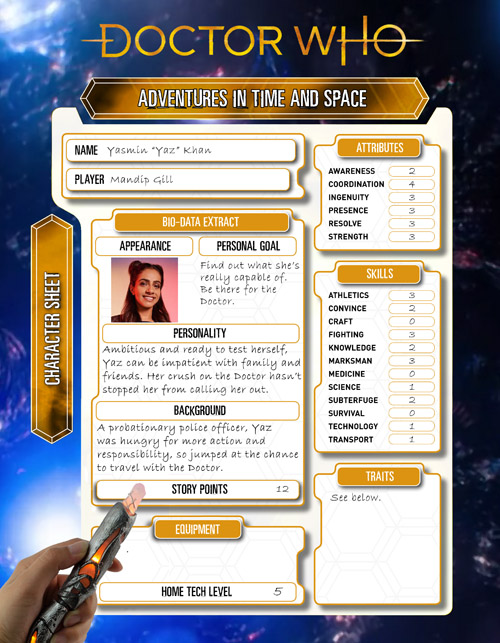 Stuff that didn't fit on Mandip's sheet, kept on the back...

SPECIAL TRAITS
Vortex - Yaz has learned to fly the TARDIS

FAVORITE METHOD FOR ACCUMULATING STORY POINTS
For Mandip, it’s all about difficult relationships. When in the 21st Century, Yaz’s family becomes a story engine, always getting on her nerves or into trouble. When in the TARDIS, she wanted similar conflicts so created a hard exterior for Yaz to hide her feelings for the Doctor, leading to interpersonal conflict and dangerous choices. 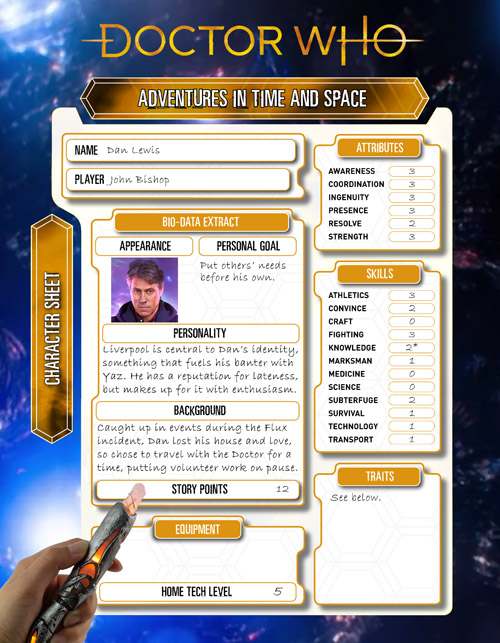 Stuff that didn't fit on John's sheet, kept on the back...

SKILLS
*Dan has a +2 Knowledge Expertise in All Things Liverpool.

BAD TRAITS
Argumentative (Minor)
Code of Conduct (Minor) - Dan does as much volunteer/charity work as he can, but refuses charity as he doesn’t feel he meets the standard
Impulsive (Minor)
Unlucky (Minor)

FAVORITE METHOD FOR ACCUMULATING STORY POINTS
Dan’s primary Story Points engine is his bad luck. If something bad is going to happen to someone in the Fam (getting hit by stray fire, being late at a crucial moment, getting left at the altar or captured by a giant dog), it’s going to be him.