What a Card: Ilia

Being a look back at cards from the Star Trek CCG, and what I thought of them back when they were fresh and new... in EPISODE order. We have to skip a bit before another scene is covered, and that brings us to Ilia's introduction... 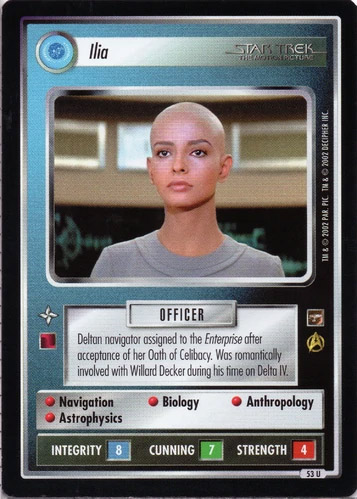 PICTURE: Looks like the V'ger puppet, doesn't it? Well, it isn't. Ilia was that dull ALL THE TIME! It's actually good for the pic to hint at later events through her expression, and the composition isn't half-bad. A 3.3.

LORE: The Oath is mentioned, but this is pretty standard lore. Species, post, romantic involvement... yep, a standard 3.

TREK SENSE: The whole Officer/Navigation/Staff icon is standard for a helmswoman, sure enough, and Astrophysics, while I don't remember it being part of her skill package, makes sense for this job. She kept her head during the wormhole incident after all, and that's an Astrophysical phenomenon. I don't know anything about the Deltan sexual arts, but they are supposed to be quite expert and potent. Biology no doubt stems from that expertise. As for Anthropology, she showed the appropriate openness to other cultures by dating an Earthman, and later serving on a Federation ship. It may also be that Deltan customs are complex enough to warrant the skill. The missing skill here, and you'll say it's debatable, is Empathy. In the Director's Cut of the Motion Picture, she's able to heal Chekov in the same way the Empath Gem does. Debatable because that hasn't always been the definitive version of events? Ok, but Decipher went ahead and used some for the Director's Cut's V'ger effects on cards, so it's not like they were unaware of the scene. You might also say it's not THAT KIND of Empathy, and I agree, but Gem has it. No doubt it reinforces her claim to the Biology skill, but I'd have liked some kind of "healing" ability. High Integrity is necessary to uphold her Oath of Celibacy. Cunning is about right, as she seemed smart, but a little inexperienced. No problems with Strength either. Not the sharpest approximation of a character, so just 2.8.

STOCKABILITY: If she'd had Empathy, she would have added a lot more to a Classic Films deck, as is... (ok, ok, I'll stop beating that particular dead horse). A simple collection of 4 skills won't make her a good reason to open an AU Door, but how useful is that collection in a CF deck? None of them are stinkers, to be sure, and they are about split in the middle when it comes to space/planet usefulness. Anthropology on personnel from Time Locations might always use The Guardian of Forever to move about in time. And she has no MEDICAL to filter out her Biology through nasty Dilemmas. Her skills aren't really rare, and she reads a whole lot like Commander Chekov (who's missing the Anthropology). She's not bad (good INTEGRITY too), but she doesn't add anything primordial. Up to you if you want to use her over someone else. The skill list is worth maybe 3.3.