Being a look back at cards from the Star Trek CCG, and what I thought of them back when they were fresh and new... in EPISODE order. And now for a Motion Picture Klingon... 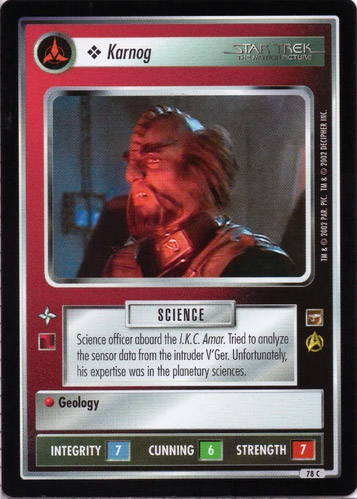 PICTURE: Terrible make-up and wig, yes, and the usual blur you might associate with red lighting, but I like its campiness. Further, it may not look like it, but another Klingon has been CGIed out of the shot. Good match on the background, guys. Maybe I'm in a good mood or something (though I don't feel any different), but a fun 3.2. You can't say it isn't distinctive.

LORE: Well, the card starts off without properly acknowledging universality, but it gets better from there. The designers have used his failure to properly help deal with V'ger as a joke, and a way to give him a totally off-movie specialty. To me, funny, and thus unimpeachable. Again, fun at 3.5.

TREK SENSE: What we know is that Karnog was indeed a Science officer (at least, he was the scanning officer on the Amar). He was a Staffer all right, and I'm not surprised at his universality, since he was so non-descript. We have to believe the lore about the planetary sciences specialty (translated as Geology here), but it's not a stretch, not after THAT performance. It's a performance that'll also give him low Cunning. The Integrity's a bit high for a time when the Klingons were baddies, but they're played as victims in The Motion Picture, so there's nothing essentially wrong with it. Shows there were honorable (if not Honor-able) Klingons even if we didn't know it at the time. Strength's on par with the affiliation. Like I said, pretty unimpeachable. 3.8 here.

STOCKABILITY: Look, mission specialists don't HAVE to play with their micro-affiliation because of the downloading properties of Assign Mission Specialists, so Karnog can offer his Geology to non-CF Klingon decks, and in fact, should. The big reason to use mission specialists is for the extra points on all your missions, and the Classic Film Klingons just don't have enough personnel to make it worth your while. The Klingons as a whole, however, are a different matter. They have plenty and can recoup some of the points they might miss out on while they're out battling. The fewer the missions, for them, the better. And Geology is a rare specialty all around, a first for the Klingons, but none too common elsewhere (I mention this for Treaty decks). Karnog can easily bring Agricultural Assessment and Colony Prep to 40 points with the help of Zetal (they've got the SCIENCE, but you'll need some SECURITY), and Mining Survey to 50 (this time, with Kromm, all classifications are covered). To fine-tune your mission specialist deck, you'll need as many options as possible. In a straight CF deck, well, there isn't a lot of either Geology or SCIENCE, so a universal in those fields wouldn't be spit on. Attributes are generally good, especially if you play Lower Decks (obviously). 3.5 should do nicely.