What a Card: Komal

Being a look back at cards from the Star Trek CCG, and what I thought of them back when they were fresh and new... in EPISODE order. More TMP Klingons... 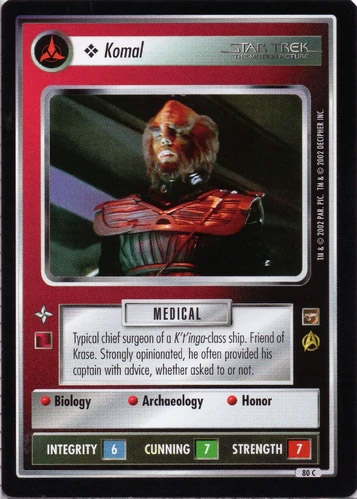 PICTURE: Terrible Klingon make-up, but not all that apparent from this angle. He looks fairly noble actually. The linework above him make the card dynamic, and I like how the red light reflects off his armor like that. Krase was removed from the foreground digitally. A surprisingly good 3.5.

LORE: First, we acknowledge his universality, and then tie him to his actual captain. And THEN, something magical. The last sentence may as well be about Dr. McCoy and his relationship to Kirk. The tone is still Klingon, but it relates the little-known crew of the Amar to that of the Enterprise. Evan Lorentz, the designer of the card had this to say about it when I mentioned it:
"I was definitely trying to relate this guy to McCoy, and I'm glad you picked up on that. The reason I was doing this was kind of silly, though: My 'favorite' sequence in Star Trek: The Motion Picture is during the section where the Enterprise passes through the V'Ger cloud. McCoy comes up in the turbolift to stand and watch the visual effects playing out on the screen. He stands there for about 3-4 minutes, and then, without having spoken a *single* line of dialogue, gets back in the turbolift and leaves. Apparently, he just came up to watch. So, when watching the opening sequence with the Klingons, I see this one guy come up and stand beside the captain's chair. He stares at the viewscreen, watching the pretty stuff happen, and doesn't speak a *single* line of dialogue before the ship is destroyed. I reasoned he *must* have been the ship's doctor, and planned the card accordingly. :-)"
Even better! A 3.8.

TREK SENSE: A typical surgeon, the Medical and Biology are naturals, and I readily accept the Staff icon. Klingons don't exactly put doctors at the top of the command list, no matter how friendly they are with the captain. Honor is also a good trait for a physician, and in his specific case (forgetting him universal nature for a second), his loyalty to his friend also warrants it. And Archaeology? What's that doing here? Well, I think it's part of the overall joke. What might an Archaeologist dig up? One answer is: "Bones". A subtle addition to the link drawn by the lore. Kind of odd for a "typical surgeon", but fun stuff nonetheless. Integrity may seem low for an Honor personnel, but the way he gives his opinion borders on the disrespectful. Cunning and Strength are ok given skills and species. I'm not really docking his score for the delightful Archaeology, so he goes as high as 4.

STOCKABILITY: As I've often said, 3 skills isn't as good as 4 (obviously) or even 2 or 1 (because of Assign possibilities). Still, nothing on Konmal is useless, and the attributes are fair and easily boostable. Honor will easily fit in a Klingon deck, being featured on many missions and various verb cards. The Klingons also have a fair amount of MEDICAL missions too, and not that many MEDICAL-classification personnel. In fact, thanks to Archaeology, he can complete Plague Planet all by himself. He also helps out at the tough Hunt for DNA Program. Klingons aren't well known for their Archaeology decks, but they can pull one off. In a pure CF deck, you won't find a lot of personnel with his skills (except Honor) - only one other instance of each, in fact - so he's the universal that fills the void. Makes himself useful enough for a 3.4.