What a Card: Krase

Being a look back at cards from the Star Trek CCG, and what I thought of them back when they were fresh and new... in EPISODE order. The Amal gets a captain and it's an actor we know... 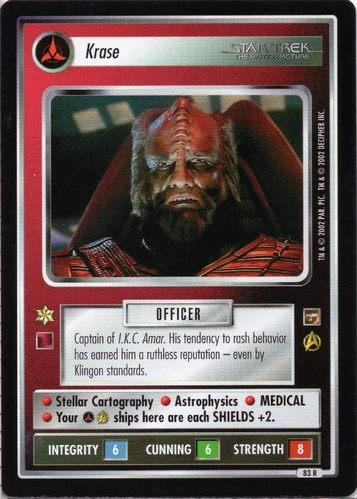 PICTURE: It's hard to see Mark Lenard under there, but that's him! The primitive Klingon make-up stands up here a little better than on the background extras, though there are clearly wig problems. Still, it's got dramatic lighting and an aggressive full-on angle. Note that Komal has been digitally removed from his position leaning on the chair. Good enough for a 3.2.

LORE: Interesting name, in that it is an anagram of Sarek, the seminal Mark Lenard character, the palindrome of which was already taken by the Romulan Keras (also Lenard). Matching commander status on the Amar is useful if plainly told, but the next sentence holds a lot more interest. It extrapolates a personality and reputation for him based on his short scene. Good stuff, and somewhat ironic given his fate. A very good 3.6.

TREK SENSE: A mixed bag, really. Being captain is represented by the usual Officer and Command icon. No Leadership, though he seemed to lead a group of ships. His being rash and ruthless is represented by low Cunning, and perhaps by the 6 in Integrity. See, the rest of the Motion Picture Klingons point to an Honorable crew, so he's a good guy, but ruthless. As long as we're on attributes, Strength 8 is perfectly fine for his species and position. His investigation of V'ger shows up as Stellar Cartography and Astrophysics, and maybe by the special skill. That skill is odd because it boosts Shields on Classic Film ships, but none of the Motion Picture Klingon ships survived V'ger's assault, so is the boost really that appropriate? And how does he extend that ability to ships he's not on exactly? I suppose, he's rash, but not suicidal, so ships under his command are equipped for his combat/exploration style. I can fit it in, but it still seems a little glib. As for Medical, I have no explanation. Again, we might say that he's learned to deal with his own rashness by, in this case, learning how to fix the wounds he and his crew might have incurred on one of his blind plunges forward. (Or... Medical to cure his "rash"?) Straining under the weight of justifications, I'm going no further than 2.5 for Trek Sense.

STOCKABILITY: The Klingons in general don't have a huge number of good MEDICAL personnel, so Krase might make it into a deck just on that basis, adding other skills to that one (good for space missions mostly), but in a CF deck, he'll be more at home. After all, that's where you'd be most likely to use CF ships, including the IKC Amar. He's matching commander for that ship, which, Plaqued and Logged, comes up to 9-9-11 (add Ch'dak to make the RANGE 10). That would be triple 9s if he didn't have his special skill, which won't just cover his own ship, but all other CF ships at the same location. This will work even if he's on a planet mission, extending the boost into orbit. That SHIELDS boost certainly helps bring the CF-era ships to the standards of the 24th Century, giving them more of a chance against tougher opposing ships. In a CF deck, you also have less of all skills, so he's more useful that way too. Definitely to be included in a CF deck, I give him 3.6 here.