Who Are the TRS-80 Computer Whiz Kids?

Category: Supershill
Last article published: 7 April 2020
This is the 12th post under this label

Who's This? Radio Shack mascots. 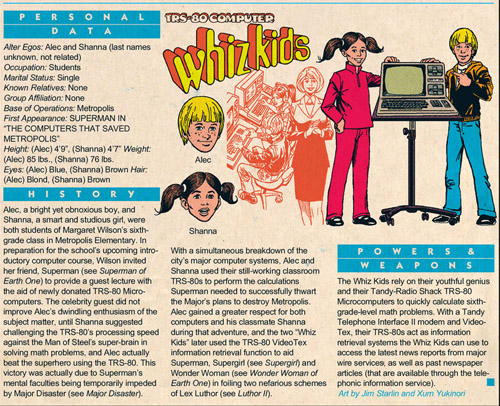 This was in Who's Who?! Not exactly. The entry is taken from my late friend Xum Yukinori's issue of Xum's Who, a beautiful fan project he was kind enought to send me a copy of.
The facts: Between 1980 and 1999, the Radio Shack Education Comic Book Program published 11 issues starring Alec and Shanna, computer-savvy Whiz Kids (and their teacher, Ms.Wilson), in adventures first with Superman and other DC heroes, and after 3 issues, all by themselves as Archie Comics took over the license. Cary Bates and such artists as Jim Starlin and Curt Swan worked on those first three. The Archie books would feature such creatives as Paul Kupperberg, Carmine Infantino, Dick Ayers, Chic Stone, Howard Bender and Mike Esposito. (The Kids also changed their name to the Tandy Computer Whiz Kids after a while.)
How you could have heard of them: In the comics community, this is somewhat famous (or infamous) because it's a sustained example of Superman super-shilling for a product, but I doubt most people remember them, or indeed, even remember the TRS-80/Tandy computer. At least, not under a certain age.
Example story: Superman in "Victory By Computer" (1982) by Cary Bates, Curt Swan and Vince Colletta 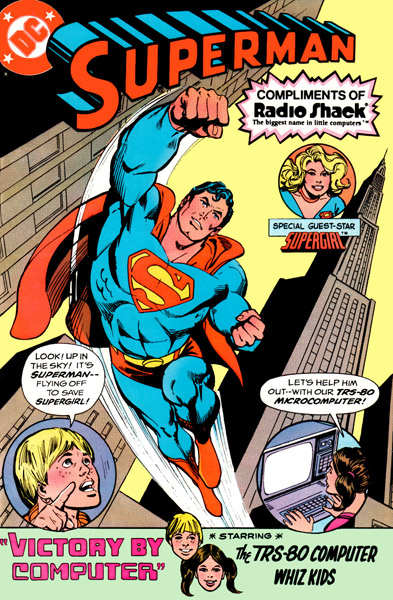 Wait, let's get you ready. These fancy new computers come with their own jargon, and I wouldn't want you to get lost: 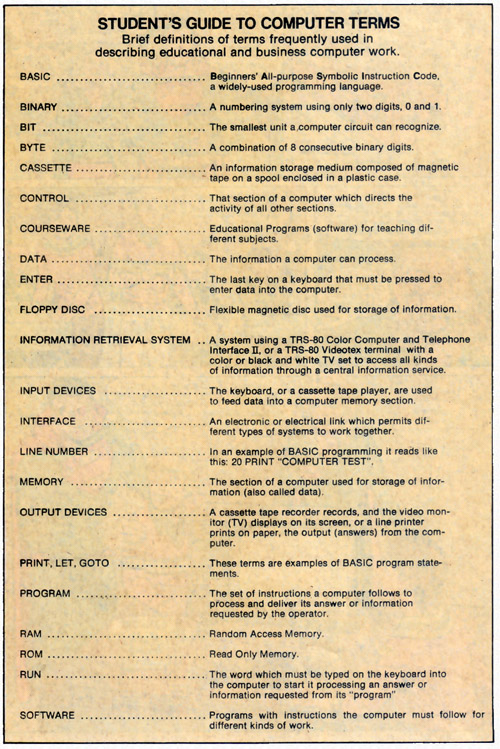 Got all that? We're ready to read this second Whiz Kids comic together. Sixth-grade students Alec and Shanna (I just realized that makes them about my age give or take sliding timelines - I mean, I don't think they ever moved past 6th grade over the years) get a visit in class from Superman and Supergirl. It makes sense that in a superhero world, some superheroes would show up to do those PSA spots normally afforded police officers and firefighters, but this is pretty high profile. The class is pretty stoked, but the Whiz Kids are already jaded since it's the second time Ms. Wilson has arranged for Superman to visit, and the last time, they helped him save Metropolis from Major Disaster. Last time, Superman brought a TRS-80 for show and tell, but the super-cousins look empty-handed this time. But baby wants his baba! 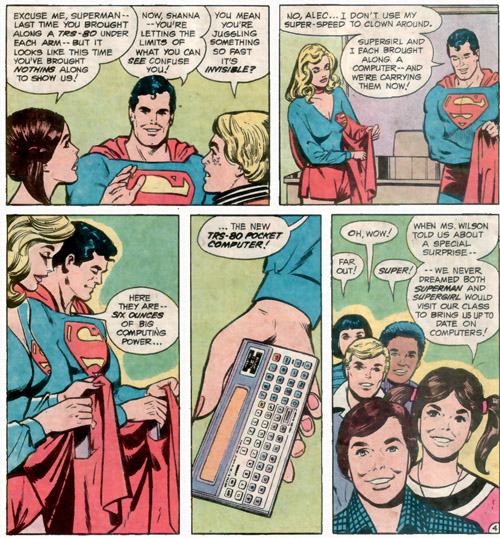 Makes it seem like Radio Shack was really ahead of the curve, doesn't it? Of course the pocket computer looks like a glorified calculator, but computer expert Supergirl puts it into perspective: These little things can do what a roomful of computing machines did in the 1960s. So I guess you could go to the Moon and back. The screen is one small strip, but it can remember words, so you can type in your notes. As to its ability to "analyze information and make comparisons", I hope you'll allow me to raise an eyebrow. It speaks Basic, but I can't see what programs you could run without more screen space. 1980s computer nerds! I need your opinions on all this! Was it as advertised, or basically just a Wizard game? But before computer expert Superman can explain any more, he hears some emergency out there somewhere and bolts, leaving his cousin with the class. She's comfortable in class because in her secret identity, she's a teacher and student adviser - but she probably shouldn't be telling this to Ms. Wilson!!!

While Superman visits Lex Luthor, who has cryptically promised that the Man of Steel himself would break him out of prison, Supergirl engages with the class, and so follows a demonstration of the TRS-80 color computer by the Whiz Kids, to show what they learned. Uhm... let's skip over that, but for the record, they set up a modem, so this is all very cutting edge and sounds like the Internet we have to day, minus the pop-up ads and fascist trolls. As a test, Supergirl asks the Kids to forget everything they know about Luthor, and try to find his story on the network, while she uses her powers to do the same, analog-style. Who wins this race? It's a dead heat (but I feel like Supergirl was maybe paid to arrive just as the Whiz Kids finished up, cough, cough - still, the computer has to be faster than a non-super-powered person trawling through a library's reference section!). Next, Supergirl goes on patrol real quick (and gets taken down by red solar panels - I don't think that's how solar panels work, Mr. Bates!), while the kids pile into a bus to go visit a technology museum and learn all about the history of computers. Among the exhibits are giant circuit boards. You'd think you were in a Dick Sprang Batman story. 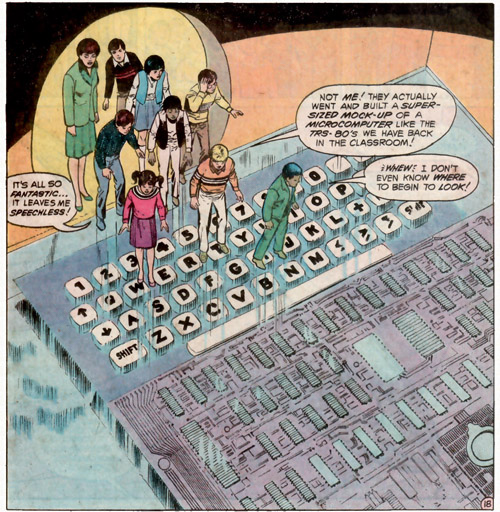 But look, it's not that I'm not having fun learning all about the new-fangled inventions they call computers, but when are the Whiz Kids gonna get in on some action? Pages and pages later, we get back to Superman, or rather, Superman gets back to the class and wonders why Supergirl never returned. The Maid of Steel is trapped in a locked, but well-furnished apartment, her powers operating at a very low ebb. She manages to pick the lock (a skill you wouldn't expect a Kryptonian to practice), but it only gives her access to a plush game room... that includes a TRS-80! AND a telephone! What have we just learned, kids?

It's a little silly that Supergirl doesn't think she can call the cops because they'd think she was a crank - or anyone who can contact Superman, heck, Clark Kent himself - but the comic isn't so silly as to propose that she should send an email to the class when there's a phone right there. But good thing they didn't leave the computer on the network, right? Well, no, it's fine, thanks to the Videotex system, you don't NEED a telephone line - hey, that's gonna free up the phone at home! (Wait, I'm super-shilling now, sorry.) What REMAINS quite silly is that the story has, to date, hammered home several times that super-people have extremely good super-hearing, so someone SOMEwhere should be shouting at Superman to bring him there. Instead, Supergirl asks the Whiz Kids to find information on the Purple Palace, where she is apparently imprisoned. They find the address, give it to Superman when he checks back in later, and Superman saves her. Not that he needed the address (the article they find is about Superman and Supergirl raiding the place) or that Supergirl does anything with the information. And while Luthor is apparently the genius behind the solar panels and the trap, it doesn't really tie into his promise that Superman would break him out of prison - well, I guess he was going to hold Kara hostage and strong-arm Supes into freeing him to get her back. 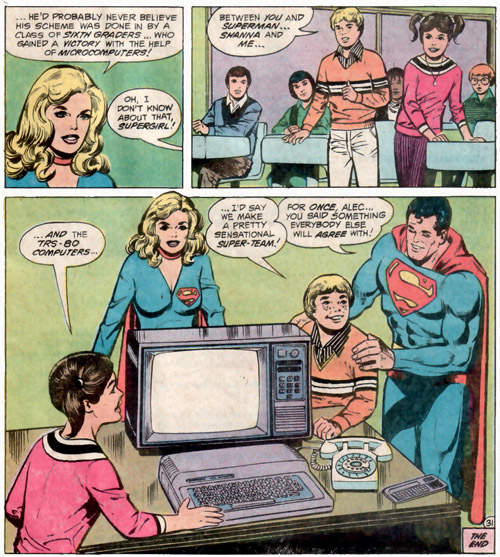 But let's act like the TRS-80 computer saved the day. Why not?

Who's Next? A winged Legionnaire.
Comics Supergirl Superman Supershill Who's This?

ShadowWing Tronix said…
In Superman #358 Alec, Shanna, and Ms. Wilson show up in the story. We learn how Clark and Ms. Wilson know each other. I haven't read it but Linkara did a review of it.