Who's the Dark Destroyer?

Who's This? A cloned champion. 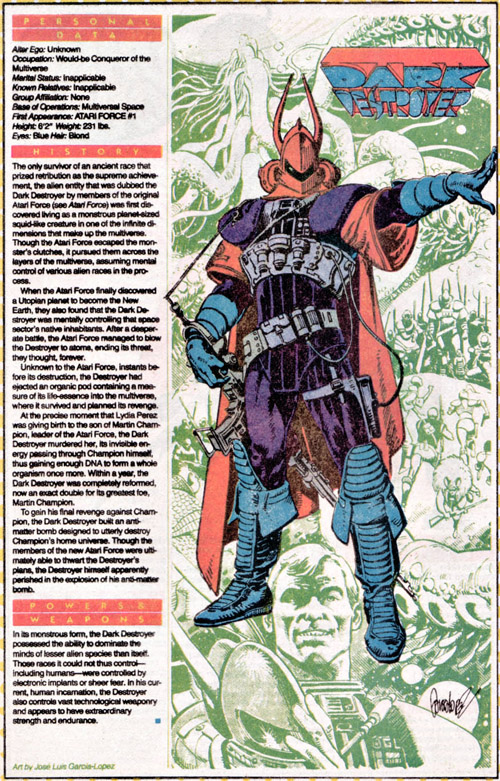 The facts: Atari Force's big bad, he appeared in 11 of the series' first 13 issues, essentially from #3 to #13 (mostly in 1984). The Who's Who entry spoils the big surprise that he was a Lovecraftian entity housed in a clone of Atari Force leader Martin Champion, so we won't hide it here. And if you track back to the Lovecraftian monster's destruction, it happens in the game tie-in comics - issue 5, which should be his actual first appearance.
How you could have heard of him: You gotta have read Atari Force, there's no other option.
Example story: Atari Force # 13 (January 1985)  "The End: Part Thirteen" by Gerry Conway, Joey Cavalieri, Ed Barreto and Ricardo Villagran 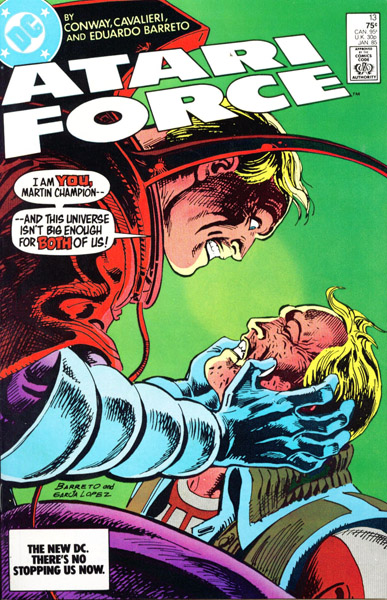 We pick things up at the very end of his arc, as the Destroyer removes his cool helmet and reveals he was Annikin Skywalker all along. Or someone who looks exactly like Martin Champion. He's taken this form because being a planetoid-sized mess of tentacles isn't very practical. He's also tractored Atari Force to his location (for ease of gloating) and has an anti-matter bomb set to detonate right behind him. Secret origin time! 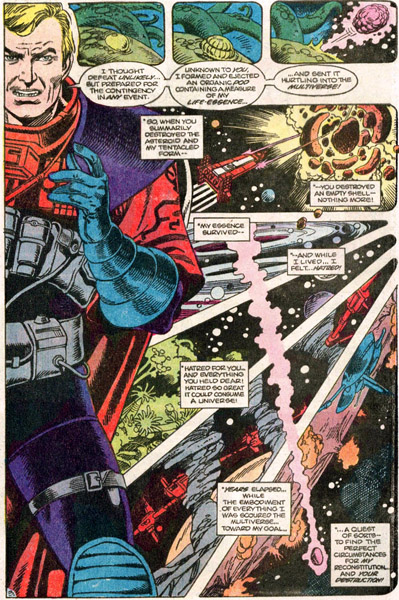 A being of pure evil, he sent his essence to Earth where his first act was the sap the life force of Martin's wife right out of her as she was giving birth to their son Tempest. That's when he stole Martin's DNA, then immaculately conceived himself in the womb of a dragon-like hippopotamus (why would I kid you about that), and was reborn in human form, growing into an adult within a year. Built an army. Now poised to blow up the whole UNIVERSE. It's enough to make a man crack! 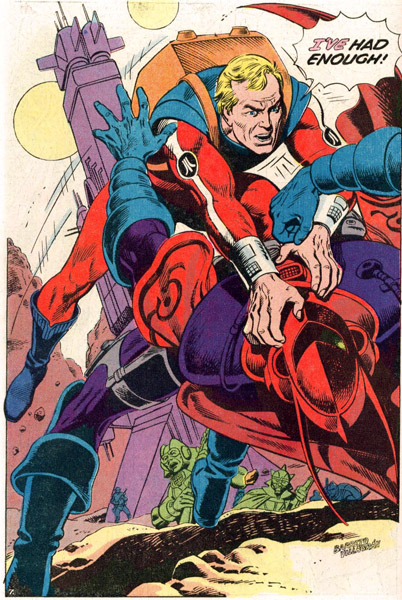 Atari Force gets busy dealing the Dark Destroyer's army, so Martin is forced to fight alone. Well, seems like the Destroyer isn't quite as physical a threat in his human form. 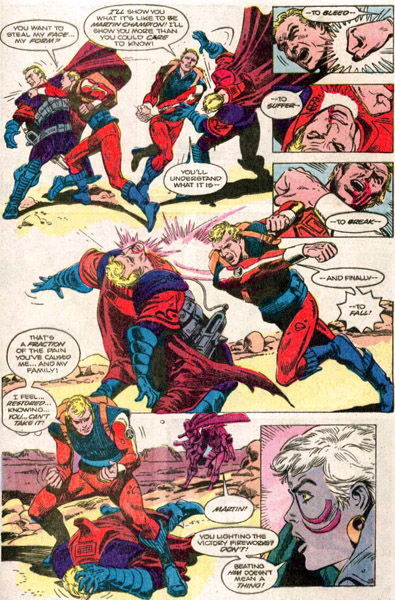 You can steal the body, but you can't steal the experience and training. Hey, is this like those fighting games where both players can take the same character? If it is, one player knows all the combos, and the other is mashing buttons hoping to get lucky. He's down. Atari Force races back to Scanner-One after Dart fails to disarm the bomb. They gotta get out of this "universe". His plan foiled, DD tries to stop the countdown, but...

That's right, blame other people. And then the unthinkable happens: The universe does explode. Earth-whatever number Atari Force comes from is no more. The team escapes to another universe with their ship's special drive, but a hundred billion lives are lost, including the Dark Destroyer's. Oh geez. The issue follows up with a cutesy Hukka back-up strip. I guess that's one way to cleanse the palate.

So... Darth Vader or Dark Destroyer? Not sure the death toll is even comparable.

Who's Next? A Gemworld villain.
Comics Who's This?

ShadowWing Tronix said…
The Dark Destroyer actually makes his first appearance in the original minicomic miniseries, that was only available with certain Atari 2600 games. (I did a review of all of them over at my site as part of the "Free Comic Inside" series and you can read them on Atari Age.) Originally it was a eldritch horror type of creator that fed on fear until it was defeated by the original Atari Force, including Martin and Lydia. It was made by DC and I believe the same writer and artist that worked on the big series.
November 5, 2022 at 10:07 PM

Siskoid said…
I do quickly mention that.

ShadowWing Tronix said…
Sorry, I must have missed that sentence in the original read. Saw it now.
November 7, 2022 at 6:09 PM