Who's This? The Tyrant of Apokalips. 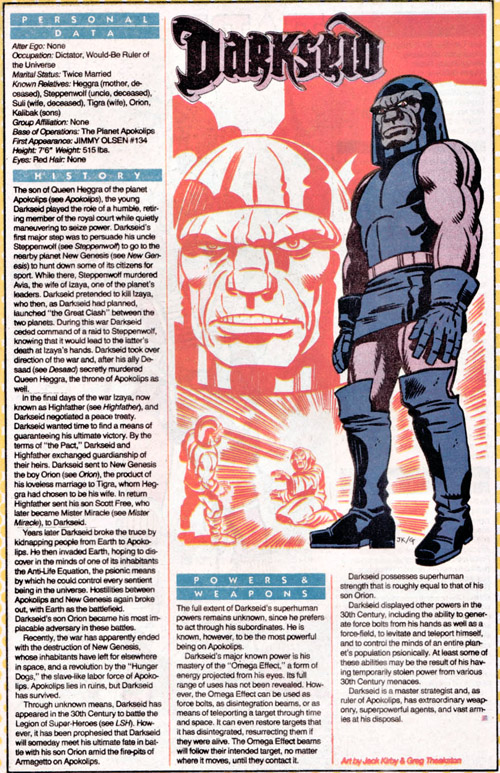 The facts: Without a doubt the most popular/important/ubiquitous character in Jack Kirby's Fourth World, Darkseid made his first cameo appearance in Superman's Pal Jimmy Olsen #134 (December 1970) before making his first full appearance in Forever People. The fascist leader of the evil New Gods, he would only infrequently cross paths with non-Fourth World characters in the pre-Crisis era - even the popular Great Darkness Saga uses him as a background threat - but with the first crossover event of the post-Crisis DCU, Legends, it seems all bets are off. He has since become the most overused of villains, the biggest of the bad, not only appearing in many New Gods-related projects, but more big events like Final Crisis and the birth of the New52's Justice League.
How you could have heard of him: For comics readers, he's hard to miss, but for others, I believe he owes his popularity to animation. For a certain generation, he will be remembered as the main villain of the Super Powers cartoon (there's a great action figure of him to go with it), and later, he'll be an important part of the Superman Animated Series and the Justice League follow-ups. Most of the cartoon series have used him, including Teen Titans Go! where he is voiced by Weird Al Yankovic(!). He appears in the Justice League movie too, but only in the Snyder Cut, so I don't care.
Example story: New Gods #7 (Feb-March 1972)  "The Pact!" by Jack Kirby and Mike Royer 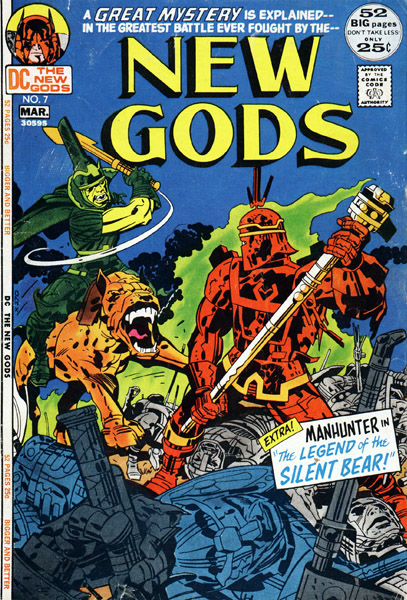 Back when the New Gods were young, Steppenwolf conducts a raid on New Genesis and accidentally kills Avia, wife of Izaya, the man destined to become Highfather. Just out of sight, Steppenwolf's nephew admonishes him for undoubtedly starting a war, for Izaya would never rest until he has revenge. Well, it may be better to finish Izaya off here, in the wilderness, before any more witnesses show up, and Izaya gets hit with a killing glove. The nephew in question? Our boy Darkseid, who as a young man, uhm, looks about the same. 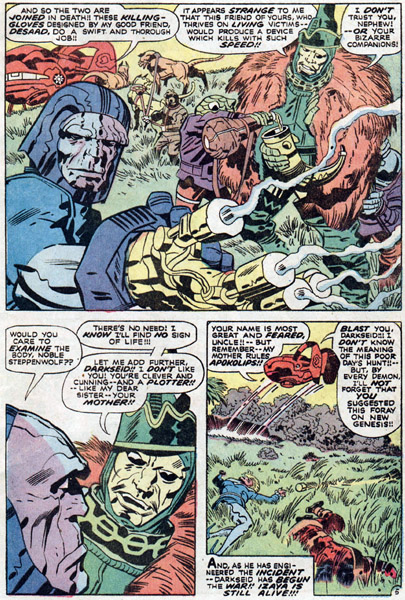 But Darkseid is playing his uncle for a fool. HE's the one who suggested they go on this little trip, and he's purposefully left Izaya alive because he WANTS a war. This is who we're dealing with here, folks. And as the war rages with no end in sight, Queen Heggra, Darkseid's mom, finds Steppenwolf's approach lacking and tells him to listen to her darling Darkseid. Darkseid's been hanging out with scientists and they've discovered the X-Element, which our boy has used to lure Metron to the Royal Bunker: 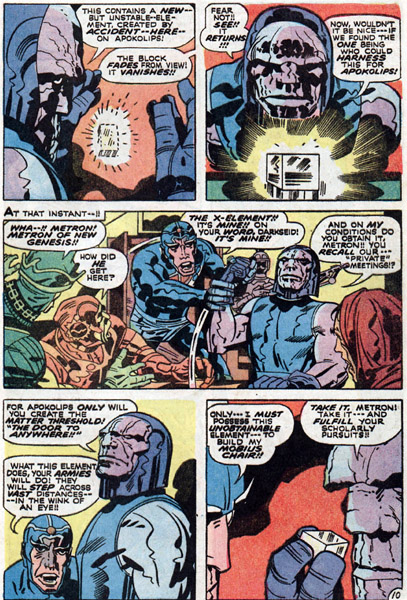 And that's how the New Gods got Boom Tubes. I don't know if I ever thought of Darkseid as a momma's boy, but Heggra is certainly... supportive. 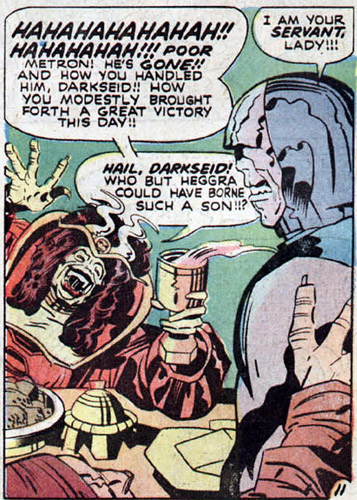 Oh he's gonna be an entitled tyrant when he grows up, for sure. His next move is "allowing" Steppenwolf to take point in a certain battle, when the "risen" Izaya defeats him. One less political enemy to worry about. Darkseid invests more and more in new technologies that take the war to even greater heights of terror, until the cosmos itself could be destroyed. He's pushed Izaya to the deepest despair, and recognizing that Darkseid has manipulated him into the role of destroyer, he rejects his warrior's trappings and seeks another solution.

By then, Heggra is dead and Darkseid is sitting on the throne. His wife Tigra is outraged that their son would become part of this "solution". 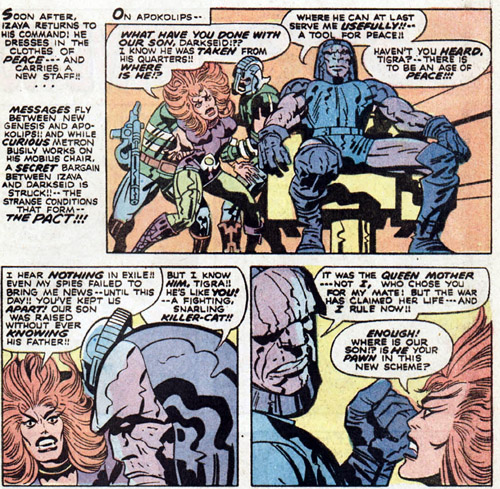 Darkseid doesn't have fatherly bone in his body. He's had his son raised in isolation. Tigra's also been in a separate exile. And Izaya has offered a trade to end hostilities - WHICH SUITS DARKSEID FINE, BE AFRAID! - and yeah, why not, send my kid to New Genesis, I don't care. Then he has Tigra taken away, and what does he do with Izaya's son? 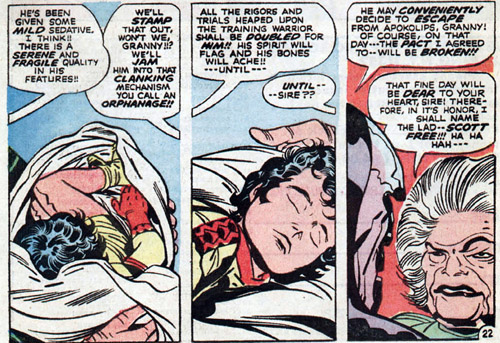 Throw him in Granny's abusive orphanage, from which he hopefully escapes some day, breaking the pact between worlds so the war can begin anew. This is carefully calculated detente that no doubt advantages Darkseid's plans (the quest for the Anti-Life Equation?) and is also bound to create problems for Highfather (a violent adopted son - in fact, Orion is old enough to try and assassinate his new dad as soon as he booms up to New Genesis - and the systematic destruction of his biological son's soul).

Darkseid the cold manipulator is much more fearsome than the big brute who physically tangles with Superman and the like that we get later, no?

Who's Next? A tattooed mercenary.
Comics Jack Kirby Who's This?