Who's This? A tattooed mercenary. 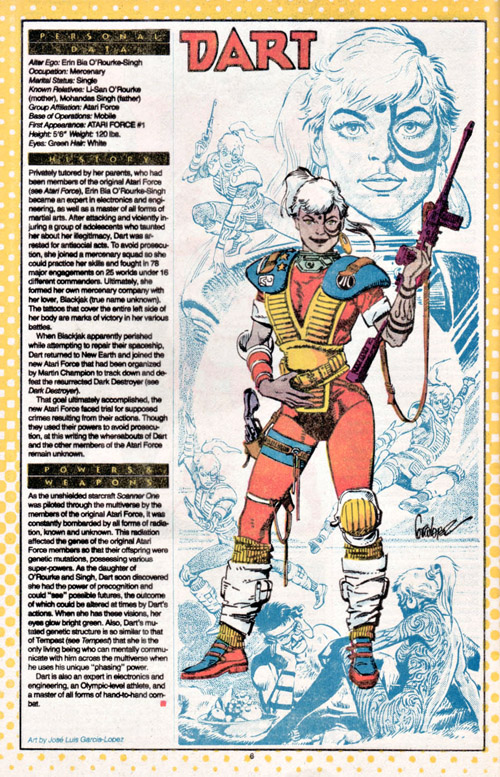 The facts: Like the rest of Atari Force, Dart first appears in the series' first issue and appears throughout (18 issues and a special), from 1984 to 1986. She has her origins in the earlier Atari Force and the comics that came with various Atari game cartridges (1981-82) since her parents are two of the crew members there (Li San O'Rourke and Mohandas Singh).
How you could have heard of her: As I've said before, you're either an Atari Force fan or you're not YET an Atari Force fan. The group has not appeared since 1986.
Example story: Atari Force Special #1 (1986) "A Mercenary's Story" by Andrew Helfer, Paul Kupperberg, Marshall Rogers and Ricardo Villagran 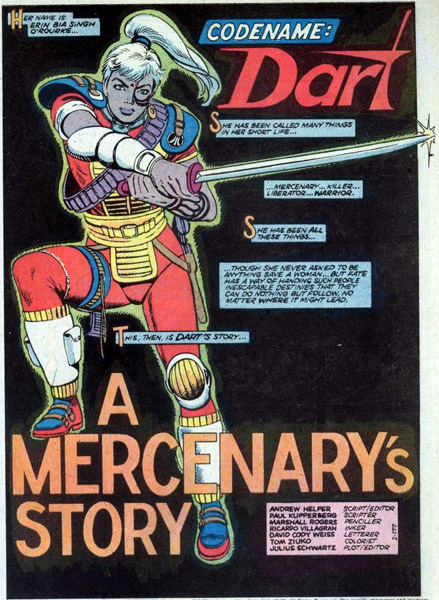 Dart is kicking ass and taking names from the very first issue of Atari Force (vol.2), but this is her origin story. Raised by her parents to train both body and mind, she ends up in a military academy on New Earth where the kids are pretty nasty. Erin is already a badass. 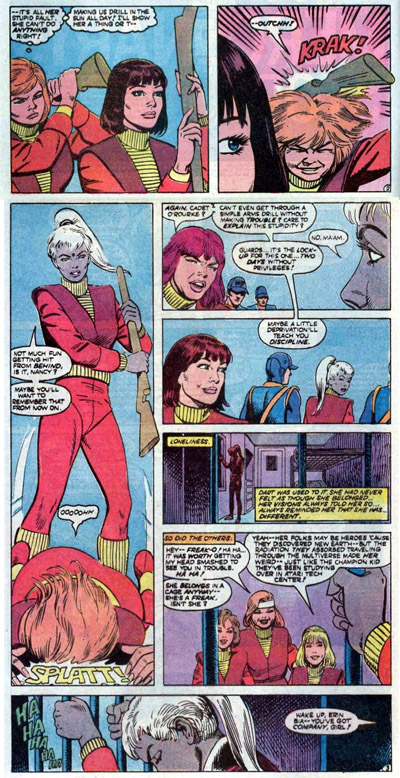 It's her roommate Dalia, to whom she shows so much loyalty, that puts the idea of becoming a mercenary into her head. Sounds romantic. But when the mean girls jump them again, one of them gets thrown through a rooftop window and the girls run. Maybe mercenary is the only job they CAN do. Erin's parents find her pretty easily and get one of their contacts to find her and clumsy Dalia a job on a rim planet called Sangfroid 7. It's basically Tattooine with a side of Beneath the Planet of the Apes. There they join an underground brotherhood OF mercenaries. It's all falling into place, and the training continues. 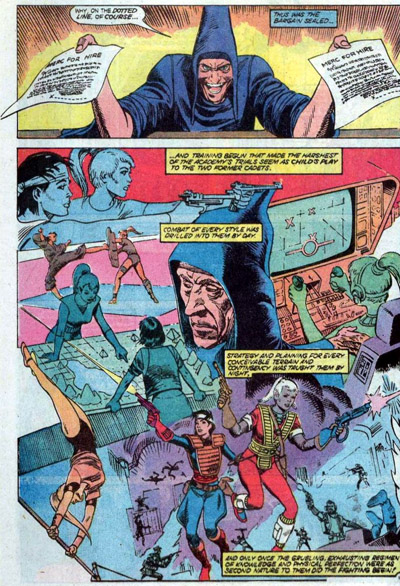 And after the training, missions. And it's all supposed to be for the greater good despite the head guy's sinister contracts, toppling tyrants, stuff like that. They get through the intern stage, get their tattoos, and now they are ready to take CHARGE of a mission. They young women will lead a force of 20 mercs to defend the royal palace of obese Orions against rebel forces (hm, it sounds dodgy). In the initial attack, Dalia is killed, Dart grieves but lies in wait for her killer. First merc from the other side to show up, she'll pounce. 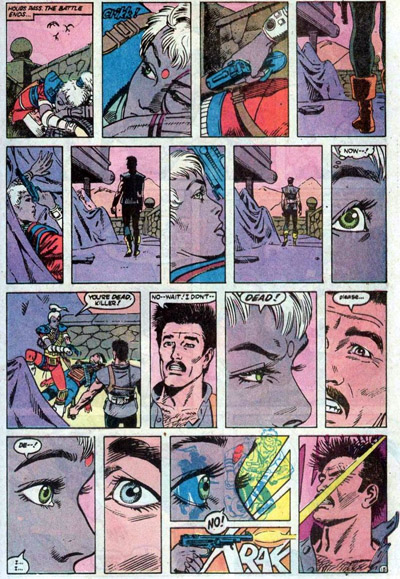 Hey, that's Blackjak, who Dart has been having precognitive visions about. He didn't even draw, so she runs to help him and finds out that he TOO works for the brotherhood of mercenaries. Boss man Drago has been taking money from both sides - more than that, CREATING one of the sides - and using his mercs as disposable pawns. The two return home and Dart heads straight for the office. Drago deactivates her blaster remotely, so they go hand to hand: 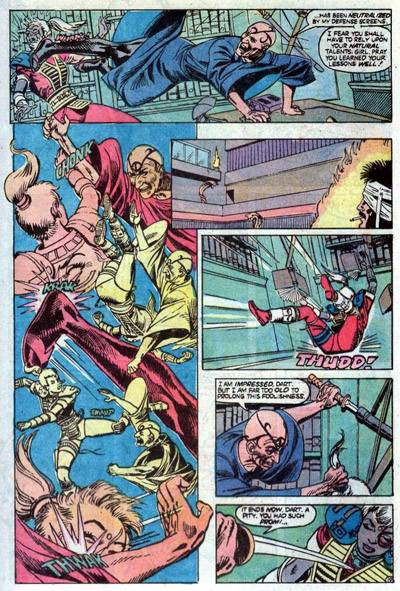 But he's been doing this longer, so he gets the upper hand, but he knows he doesn't have the stamina to let the fight last longer. Then Blackjak crashes in, creating a distraction that allows Dart to turn the tables. Drago gets a katana in the back and a push out the window. The two mercenaries become partners... and lovers.

So that's Dart's origin, how she met Blackjak, and of course how Blackjak lost that eye. She isn't up to her full ability yet in this story, naturally, but if there's an Atari Force character who could carry her own series, it has to be Dart, right? She's cool, but she's also got this whole corner of the Atari world to herself.

Who's Next? Monday, Radio Shack mascots. And next week, a winged Legionnaire.
Comics Who's This?