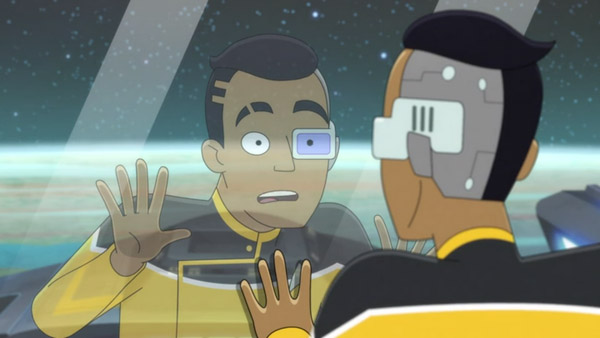 WHY WE LIKE IT: Rutherford really does need the character development.

WHY WE DON'T: But is it enough?

REVIEW: Boy, we may or may not have sensed it at the time, but Reflections is a really important episode continuity-wise as things in both its A and B plots will return at season's end and have a huge impact on the finale. The story we've actually been following for a while is Rutherford and the secret of his implant. Allegedly the result of elective surgery, we saw shadowy figures standing over Samanthan in Season 2, so something was up. In this episode, a former personality of his takes control of his brain - described as a back-up overwriting the present Rutherford - and he's quite the douche bag. There's a fun "Enemy Within" vibe, with Tendi (and former Rutherford date Ensign Barnes as well) in the Janice Rand role, under threat by the mean personality. The twist is that this is actually the "real" Rutherford, mind-wiped by a Starfleet conspiracy and turned into the current model. Through our Sam's psychic intervention and some frankly very competent work from the Cerritos crew (look at doppelganger/possession stories in other Trek and few crews do as well), he doesn't get away with it for long.

But then, the core of the story is a struggle for control inside Rutherford's mind. We've seen various versions of this over the years, but seeing as Rutherford is an engineer, and his former self further a truant racer, the battle is instead to be a race using the best craft they can build/imagine. Mean-Sam is all about speed and ruthlessness, but Corny-Sam wins with the thing he has over his counterpart: friends. He staffs his imaginary Delta Flyer with imaginary Lower Decks characters and not only survives the course, but tries to find a solution to keep his other self alive. He doesn't see it as an either or, but it seems it's not to be, and this is where I have to frown a little bit. The show's chief weakness for me is that Rutherford's hunky-dory personality is a lot like Tendi's. It makes them fast friends, but there's not enough differentiation. They now even have a similar dark past (Tendi as Orion pirate princess). I certainly wouldn't have wanted Mean-Sam to replace Corny-Sam - too unlikable - but if some kind of merging could have been accomplished, I don't know what would have come out.

Meanwhile, Mariner and Boimler man a Starfleet recruitment booth, which is a great Lower Decks idea, one I'm surprised took 2½ seasons to see the light of day. Very relatable - I've manned MANY such kiosks in the past, long days that CAN be disappointing, but are ultimately about spending the day with other kiosk people (yours and others') and making the best of it. Mariner hates it, finding it quite beneath her skills (oh, her degree is in xenohistory? interesting), but Ransom is still putting her through her paces, and threatens her with a transfer to hell hole Starbase 80 (innocuous enough, but this will ALSO become important). And so here come the potential recruits, each it seems dumber about what Starfleet is and does, a situation further aggravated by Petra Abderdeen, a Starfleet wash-out now with the Independent Archaeologist Guild, intent on sabotaging Mariner's efforts by throwing shade at Starfleet. It's amusing enough - she's a real truth-teller - and part of a distraction she's trying to cause for her own ends, and by the end, she'll invite Mariner to join her (and this TOO will come back to haunt us later). Boimler keeps Mariner in check, but blows his own gasket when outpost scientists not only mock Starfleet uniforms, but pinches his pip and throws it on the ground. He smashes everyone else's kiosks and the confidence and passion he shows for Starfleet actually motivates a ton of people into joining Starfleet. He'll spend his first night in the brig, but catches Ransom's eye positively too.

There a LOT of references and Easter Eggs in this one, covering a lot of shows and movies, but one in particular doesn't work. That's Tendi's spore-throwing plant from "This Side of Paradise". Had it been a background thing, I could have left it alone, but too much is made of it not to then feature in the plot. Rutherford does kind of act like he's been dosed, doesn't he? I mean normally, not when he's Mean-Sam. Sporing Mean to get back Corny might have been a thing, but it's just not the story they're telling. Anyway, it calls attention to itself. A bit like the Collectors Guild who wear exactly what Kivas Fajo and his friend did for no real reason.

Jon G Hames said…
Maggie and I got a bit choked up in the scene where Rutherford summons versions of his friends.
December 7, 2022 at 5:02 PM