The Man Who Killed the Phantom Stranger

Category: Swamp Thing
Last article published: 15 May 2022
This is the 28th post under this label

My first ever issue of Swamp Thing was this one: 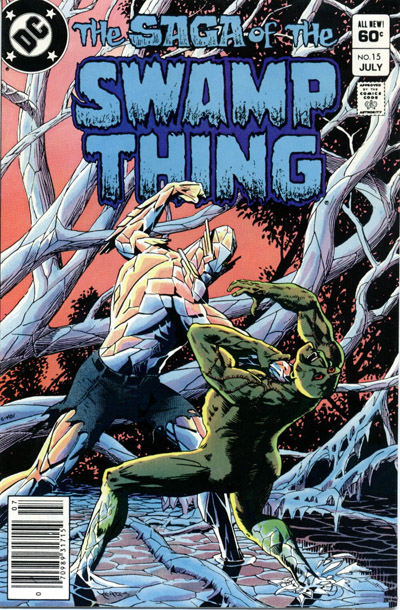 I'd gotten it at my kid brother's behest because he liked monsters, and it was still acceptable fare for immature readers under Martin Pasko as writer. The issue starts with our hero a crystal statue, evidently disabled by the equally crystalline villain in the previous issue. But I didn't get to see #14 until much later in life, and if Nathaniel "Nat" Broder (hereafter called Crystal Man because that's way more dramatic) got the better of Swamp Thing, I was even more shocked that he did the Phantom Stranger in!

You read that right! Crystal Man's Midas touch did THIS to one of the most mysterious, potentially powerful entities in DC's stable: 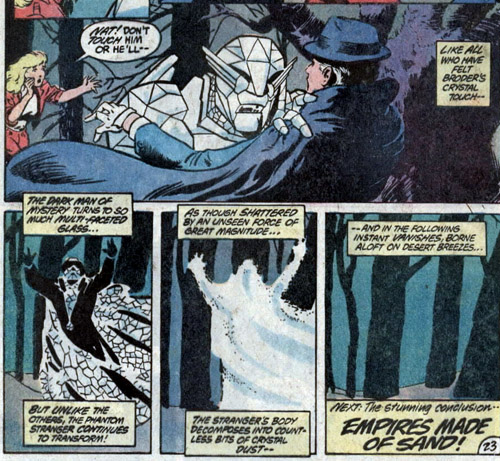 And he was never seen again. No, of course he was. But the question is: Does this reveal anything about the Stranger's nature? If he breaks apart, is he perhaps made of particulates? Particles of something "other" which allow him to go about the universe the way he does? He becomes sand on the wind (and evidently heals from that), but what theory about the Stranger does this confirm as the truth, if any?

At a guess, I'd say that if he is from another realm (say he's an Archangel as per one of his possible Secret Origins), then his body on Earth might just be some vessel, created out of random material and animated by his spirit. Any number of supernatural origins could fit this theory. So really, he's dust rendered back into dust, and the Stranger's consciousness will merely have to find the proper materials again and rebuild its shell. That's how I see it, anyway. Because it really isn't the end for him here. He shows up at the end of the next issue, narrating the final page.

And the Crystal Man's final fate? 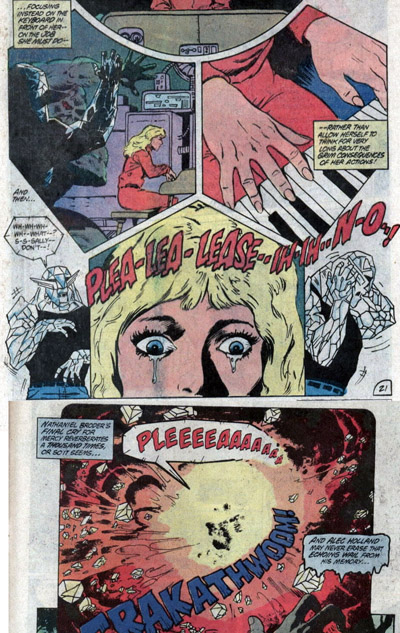 Death by piano. And he DOESN'T come back.