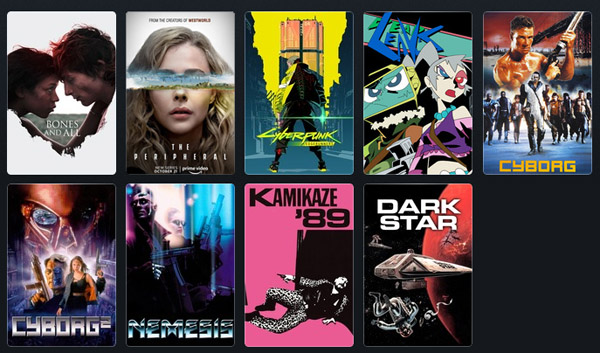 In theaters: Imagine a follow-up to Call Me By Your Name and it's a teen cannibal romance. Luca Guadagnino brings back Timothée Chalamet and Michael Stuhlbarg, but not Armie Hammer (he must have been sore) for Bones and All, a vampire with the numbers filed off, which put me in mind of Stephen King except that it was Southern Gothic (which admittedly moved off the area and even went to Maine). It's Guadagnino, so it's all very sensitive and psychological despite the buckets of gore, and both Taylor Russell and Chalamet are up for it. But while there's a metaphor at work here - the hunger of youth, of wanting to absorb everything while you can, selfishly perhaps (which some never let go of, apparently, and that makes them diseased) - the theme of family is more present and up front. Russell's character is one seeking family, a sense of belonging, and therefore questions more readily the ethics of eating, with particular attention to the victims' families. So we really need the metaphor because murder is obviously bad. We can feel for these kids and their unnatural impulses, but it's an intellectual problem because born cannibals are a fiction. And what they stand in for is rather vague to me.

At home: I find it very interesting that cyberpunk is making a comeback now that 1) special effects have caught up with the imagery and 2) it's all coming true. William Gibson's The Peripheral (a late entry in his canon) gets the television treatment, headed by Chloë Grace Moretz as Flynne, an expert gamer a decade in our future, tapped to play a new "sim", but it turns out she's beamed to a cybernetic body (a "peripheral") decades in the future. What follows is a rich tapestry of temporal interference from that future, with various factions vying for control, while also keeping touch with the present (well, 2032, which has some interesting near-future world-building) and its cast of characters. Game theory also comes into it even if Flynne accesses reality. Fairly absorbing, even if the science-fiction can be heady (the first season's climax, for example, needs more explanation, which will only come in Season 2, one would imagine). But it's cool and well cast. Probably will require additional watch-throughs to really get the complex story to gel in my mind.

Based on Mike Pondsmith's role-playing game in the wake of the video game release, Cyberpunk: Edgerunners provides 10 episodes of anime insanity - kind of like Akira: The Series, but still inventive in its own right - about a teenager who accidentally gets military cyberware and joins a group of 'runners, fatally moving towards a final confrontation with the military itself. The show is slick, looks amazing, has a cool soundtrack, and is filled with action, but it also nails the genre's atmosphere. Dark City is bleak and hopeless, so you might as well give it the finger. Live fast, die young. It's in the world-building elements that I find the most resonating images. Though there's of course a larger story being told, the show is a bit more episodic 'round the middle, when the punks might be on different assignments (I never played the RPG, and was always a little iffy on how to deploy cyberpunk in a game, but the show is very instructive in that regard), and there's a tragic romance at its heart that achieves some poignancy. There's almost too much going on, frankly, but it should provide some rewatchability. If they go on to do more Cyberpunk mini-series, I'd love to see a Netrunner at the center of things, because that element still seems fairly abstract here. That, or for a complete change of pace, a story built around a rockerboy/girl.

Though Dead Leaves is only 52 minutes, it is so frenetic and insane that there's probably more stuff going on than in most 2-hour features. This is definitely anime for those who want an artistic experience - hyperviolent and bizarrely sexual - and the plot is secondary. Still, here it is: Pandy and Retro wake up naked and with no memory of who they are - I at first thought they were in some kind of virtual (game) reality, but no, their world is just surreal and hyperactive - and soon run afoul of cybernetic gangsters and discover their origin. And weird stuff happens. A lot of weird stuff, courtesy of Hiroyuki Imaishi (Cyberpunk: Edgerunners). Almost as if this were stream of consciousness. Lots of cool gonzo effects, liquid animation, and black comedy. You look away for a second, and I guarantee you missed something. Even with eyes fixed on the screen, Dead Leaves is relentless and you only need to blink, or ponder what you just saw or think you just saw, and you've missed something. Its energy is infectious. I think I'm gonna go out for a run.

Mad Max extras with a fresh coat of chainmail grab the cyborg woman who has the data required to stop a plague in postapocalyptic Earth in Cyborg, and only Jean-Claude Van Damme and his new lady friend (Deborah Richter) can catch up and free her (thought JCVD really just wants revenge, as per the many, many, many flashbacks to how these dudes hurt his found family). Wait... The movie is called Cyborg and Van Damme ISN'T one? You heard right. It's almost criminal. For years, my belief that this was Cyborg's premise made me confuse it with Universal Soldier. But this is the least of this derivative flick's problems. The main one is that there's a LOT of fighting - which normally would be a plus - but it's badly shot. Too often, it seems like all the fighters are inept, very obviously setting themselves up for blows and lacking any kind of situational awareness. There's way too much video-assisted slow-motion as well. And then there's the fact that Fender (Vincent Klyn) is an entirely uncharismatic villain, and I was just about done after he spent his last fight screaming his head off like he was auditioning for the Hulk (and not getting it). What in the heck was that?! There are some good moments here and there, but by the end, I had run out of good will when that horrendous last line was spoken. I nearly caught sight of my brain as my eyes rolled all the way back.

It may sound odd, but I liked Cyborg 2 (AKA Cyborg2: Glass Shadow) a heck of a lot more than the original. It's got a lot of style, including a blazingly cool opening that, ironically, shows the movie has no idea what the difference is between cyborgs and androids. Angelina Jolie, in her first feature as an adult, is the starring "cyborg", trying to escape her parent corporation with the help of Elias Koteas so they can't use her as a suicide bomber. If it already seems like this has nothing to do with the original Cyborg, you are correct. They try to create a link with a couple of awkward flashbacks early on, but it's an entirely new story set decades, if not centuries, in the future. It doesn't matter. Cyborg 2 does a whole lot more world-building, and yes, its inspiration is quite obviously Blade Runner, but you could do a whole lot worse than riff on Ridley Scott's masterpiece. Jack Palance plays one of his weirdest characters, perhaps ever (which is saying something), and Billy Drago chews up the scenery as a vain tracker/assassin. Very fun performances and gonzo dialog from these two, which is exactly what B-pictures need to float topside. It's certainly the norm for cash-in sequels to already not great genre fare to get panned by armchair critics, but this is too much fun to get such a review from me!

Another 90s movie that doesn't know what "cyborg" means, even though it stars one played by Van Damme wannabe Olivier Gruner, is Nemesis, in which a war is brewing between humans and "cyborgs", which is to say, androids. Though Gruner is a savate champion, there's relatively little hand-to-hand fighting in this one, trading kicks for guns that shoot a LOT of sparks. It's ridiculous how many bullets fly without the hero, Alex, getting shredded like everything else. If this sounds like fun, it might be the movie for you. It's also got some cool robot gore and though it probably shouldn't have tried to do Terminators, I respect the ambition and it's fun if not exactly well done. I'm also intrigued by this near future (well, for us if not for 1993!) where men have female names, and women male ones, though that may be a cyborg thing - the humans definitely have unisex ones. Still, Nemesis is hard to get into because the first hour keeps switching villains on us, introducing elements that are immediately abandoned, etc. You can kind of feel the production problems intruding into the story. And well, Gruner is a pretty boring lead, even though I'm intrigued that they included the cyberpunk trope of questioning one's humanity once body parts start getting switched out. Truth be told, I came for Tim Thomerson. Thomas Jane and his butt cheeks also show up early in their respective careers. I see that Nemesis spawned four sequels, with Gruner replaced by a lady Alex. I'll have to have a hard think as to whether I pull the trigger on those.

Showing that you can create a sense of the future by mostly choosing interesting locations, Kamikaze '89 is an odd German cyberpunk crime thriller in which Rainer Werner Fassbinder (the year of his untimely death) plays a quirky police detective investigating bomb threats that lead him down a rabbit hole of corporate and state conspiracies. (How Fassbinder can be the most prolific name director in the history of cinema and still find time to play the lead in someone else's movie is a mystery to me, but you can sense his productive antsiness in the last shot.) I'm not completely on top of the plot, which involves s media conglomerate, subversive comic books (that car!!!), and a secret floor, but I grok it. The world-buidling with little means makes you think you could make your own science-fiction movie with your friends, and at the same time, couldn't. Ultimately, the movie belongs to Fassbinder, with his cool shlumpiness - a most unusual cop hero!

Dark Star is essentially John Carpenter's satirical take on 2001: A Space Odyssey (white model ships, space proceduralism, malfunctioning A.I., psychedelics), but I'm somehow better reminded of Silent Running in terms of pace and mood (this is not a positive). When the movie goes a bit broad - the beach ball alien - it fails, but making the astronauts jobbers with little ambition and/or ability does create some interest. In 1974, the Apollo program was falling out of favor, and so this projection makes complete sense. Directorially, Carpenter is still developing his style, but the camera moves well and he manages to create real moments of tension. And in those moments, you're not thinking about the low budget or the dodgy acting. Co-writer Dan O'Bannon is also touching on things he'll return to in absolute blockbusters later (Alien, Total Recall). A mixed bag, then, and hard going at times, but I absolutely love the final reel, from the resurrection of the dead commander, through the argument with the bomb, to that crazy ending. I wish the movie had been more like that throughout.
anime Geekly roundup