What a Card: Engine Imbalance

Being a look back at cards from the Star Trek CCG, and what I thought of them back when they were fresh and new... in EPISODE order. Engine imbalance throws the ship into a wormhole, and there's a card to commemorate it... 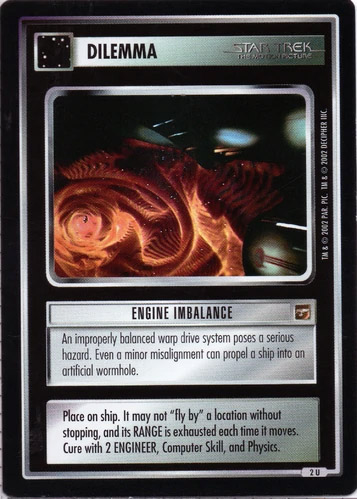 PICTURE: If I'm not mistaken, this is a refurbished fx shot from the special edition DVD of The Motion Picture, and as such, it looks great. The darkened ship in particular. A hearty 3.7.

LORE: The first part goes with the title, and the second with the picture. And though the specific example pictured happened in TMP, I've never heard of it happening anywhere else (even if we know the Intermix Ratio is important). That'll become a Trek Sense issue. Here, we've got ok lore at 3.

TREK SENSE: Forget about the wormhole, because it's got little to do with the Engine Imbalance. The intermix ratio loses equilibrium, and this causes Range problems, naturally. Whether you're thrown into a pointless wormhole or not (no, really, what was its dramatic purpose?), the ship basically stalls. Start, stop, start, stop. I'm thinking engineering staff should be monitoring things more closely, and usually do, so why no requirement to keep it from happening? Well, I guess the cure is a requirement of sorts, but it isn't preventative. Ok, Engineers aplenty are needed, but Computer Skill too (the imbalance was caused by a computer malfunction) and Physics (because the ratio is between matter and anti-matter, Physics concepts). See how I avoided making the Physics about the wormhole? The stalling idea is a good one, and I'm not gonna penalize the card much for taking its picture from what could perhaps have been a different dilemma altogether. How about 3.5?

SEEDABILITY: 2 ENGINEER, Computer Skill and Physics is a hardy batch of requirements, but they can be found on the  über-ENGINEERs. Personnel that can fix Engine Imbalance all by their lonesome? Data and Geordi (dual), Geordi La Forge (either), Miles O'Brien (from Blaze of Glory), O'Brien Founder, and many more if you add a simple piece of Equipment. These skills are so important to the game, the cure'll usually come in the form of 2 personnel at most. Of course, you can set things up with ENGINEER attackers like Make Us Go. That helps. And of course, while the Federation has the advantage, many other affiliations will have greater problems with this. When it's on the ship, we might as well call it crippled. RANGE is effectively cut to whatever the next Span is. A single mission. That's horrible not just for mission attempt options, but also in pollution decks, where stopping on a particular mission can really hurt you. Borg Ship dilemma anyone? Gaps in Normal Space is another favorite; it really can't be avoided except by not moving at all. But this card isn't just a dilemma, it's also an Interrupt. Yes, by dropping the Target Warp Field Coils damage marker on a ship during battle or dilemma ship damage, you can download Engine Imbalance on it (perhaps with some appropriate casualties thrown in, like those of Evasive Maneuvers or Photon Torpedo). Way better than waiting for your opponent to stumble onto the right dilemma combo, it gets a proactive 4.