What a Card: Jacobson

Being a look back at cards from the Star Trek CCG, and what I thought of them back when they were fresh and new... in EPISODE order. Later, Ilia heals Chekov while Spock detects V'ger's communication, so we get a Medical personnel... 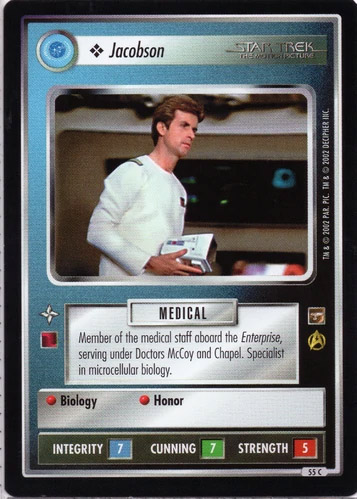 PICTURE: A lot of CGI work was done on this male nurse-type, including removing Chapel and Uhura from the image, and even extending the left side of the frame a little (though Decipher may have access to spaces outside the letterbox frame, I don't know). The result is slightly blurry, but not unpleasant as it gives the character motion and urgency. The Motion Picture uniform is closer to today's medical suits, and unusual in the cards. I used to have one of those gadgets... to view slides ;-). A distinctive enough 3.3.

LORE: Placing him in TMP without resorting to dates or the reference to V'ger is deftly done by mentioning both McCoy and Chapel as doctors. The specialty is ok, but since he's not a mission specialist in the game, a little misleading. And he's not painted as a universal. Ah well, a 3.

TREK SENSE: Jacobson is a Medical personnel for sure, with a specialty in a branch of Biology and all the appropriate icons. As for Honor, it's a natural for caregivers, I think, but why him and not Beverly Crusher, y'know? Well, I kind of like the idea that Starfleet personnel from the old days (OS and CF) are somehow nobler, more Honorable. It's not necessarily true, but personnel from that Enterprise often seem to benefit from their legendary status with the designers. No argument from me. Attributes are all fine and reasonable, not working against any of the concepts. A universal? Ignoring the lore, there's no reason for your basic CF Medical to not be just like this. A high 4 for this support guy.

STOCKABILITY: Since he's a support personnel, you can get him to sufficiently big ships through Assign Support Personnel even if you're not running a CF (or even an Alpha Quadrant) strategy. In fact, the only CF Federation ships he can do this with is the Starship Excelsior and the Enterprise-B, not many. As far as the selection of skills go, MEDICAL and Biology are of course excellent, with Honor trailing a little behind. Of course, they're all extremely common in the Federation, if maybe less so on Support Personnel per se (Biology anyway, since Honor IS). I think he'll be relegated to CF decks after all, where all skills are a little rarer, as your universal MEDICAL personnel. He stands as pretty much the only universal Federation source for all his skills in a Classic Film deck. As such, a 3.