Who's This? A winged Legionnaire. 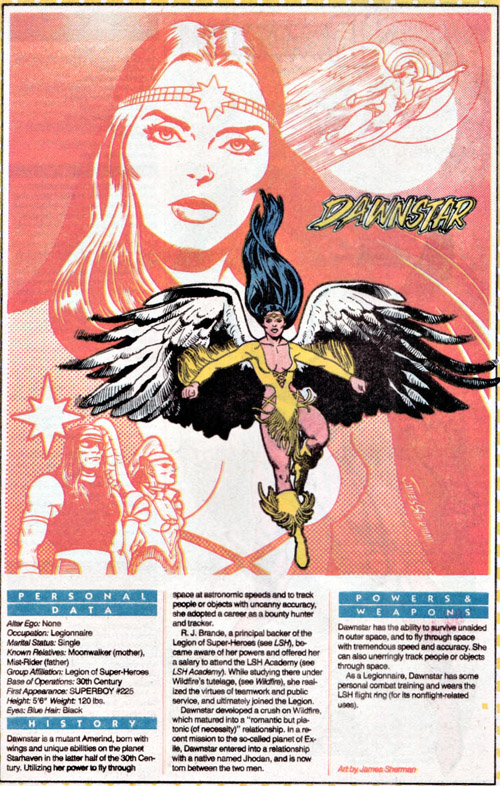 The facts: Dawnstar made her debut in Superboy and the Legion of Super-Heroes #226 (April 1977), where she helped the team against the Resource Raiders and was immediately offered membership. Many of her stories were intertwined with Wildfire's with whom she was romantically involved. But she would prove a difficult character to adapt to later iterations of the Legion, as writers struggled with her Native roots and with avoiding the stereotypes that seemed to accompany her. In the 5YL era, she lost her wings and was possessed by an entity called Bounty. She was not redesigned for either the Reboot or Threeboot Legions. And while she appeared in Bendis' Legion, she was an alien with energy wings there, in the style of a precursor of hers in the R.E.B.E.L.S. book. At least the Retroboot did restore Dawnstar as we knew her, a characterization that continued into the New52, where she was part of Legion Lost.
How you could have heard of her: She DID appear in the Legion of Super-Heroes animated series, and is set to appear in the Supergirl and the Legion animated movie.
Example story: Tales of the Legion of Super-Heroes #321-323 (March-May 1985) by Mindy Newell, Paul Levitz, Dan Jurgens, and Karl Kesel 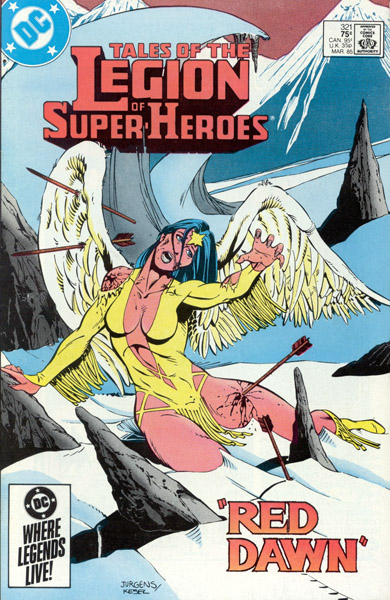 Back in '85, the Baxter series was dazzling the Direct Market, but for us rubes out in the sticks, our Legion turned into Tales and was working on the periphery for a year until it looped back and the reprints began. So concurrent with these issues, the Legion had fought the LSV and part of the team were lost between dimensions. Cue Dawnstar whose main power is tracking, and with the help of Brainiac 5, she might even find the missing Legionnaires in the wider multiverse. Or on this random planet, I dunno.

And this is kind of the problem with Dawnstar. The tracking power, I mean. It is so specialized, that it can't possibly come into play very often, and isn't very interesting besides. So her relationship to Wildfire was key to her popularity, because you could always return to the soap opera (which WAS compelling) when she had little else to do. They probably should have given her a cool weapon or something. So this story is going to be interesting if only to show what a Dawnstar adventure would be like WITHOUT Wildfire attached.

Anyway, the planet is pretty low-tech, but something's affecting Brainy's shuttle and he loses touch with Dawny (it also screws up their universal translator to make the inhabitants impossible to understand, Flight Rings too), and then she gets hit with arrows as per that first cover. Her assailants bolt her wings closed and... it's not going well. 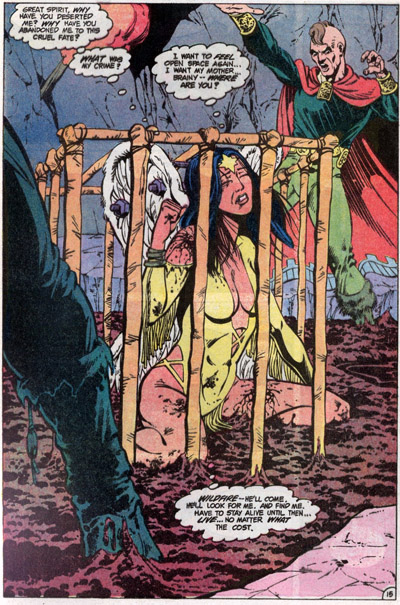 Girl, you gotta stop evoking Wildfire like the's the only character trait you have! Elsewhere, a temple priest, Jhodan, embarks on a journey on behalf of a god he can hear (oh is this going to be a Landru situation?). He and his clearly crushing novitiate get to this cave and intercede. 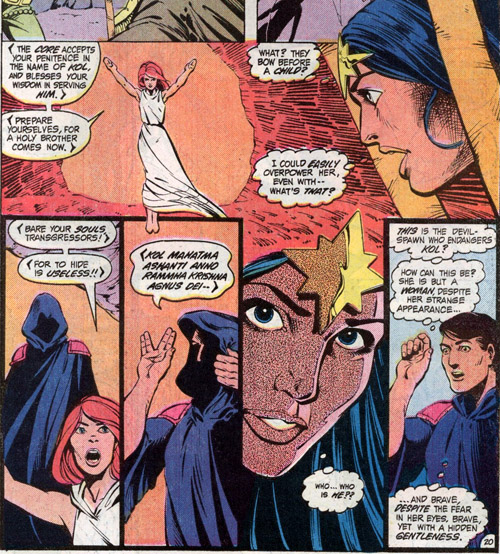 Oh no, Dawnstar is all a-tingle. If it's not one man, it's another. He's taken with her too, and the novice is already jealous. Jhodan fears what his god Kol has in mind for her, and vows to protect her even if he has to break his oath. Issue #322 starts with a high priestess talking about Kol and the Core before some crazy tech wall, and yes, now you're sure it's the kind of scenario Captain Kirk getting in trouble in. Seems Kol has decided that Jhodan is a transgressor now, and an APB is placed on both him and the alien in their midst. Speaking of which, Dawnstar tries her wings out, but they haven't healed properly. 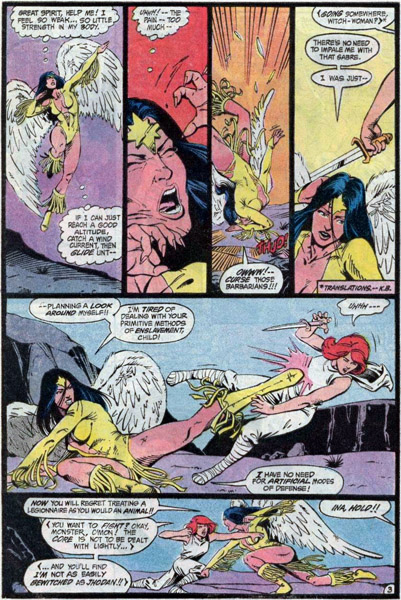 Doesn't mean she can't whup that welp's butt! Good to know she can take care of herself in a fight. A shirtless Jhodan breaks up the fight--did I say shirtless? Oh myyyyy. You gotta remember, Dawnstar's boyfriend doesn't have a body! But Dawny has a lot of empathy and language barrier or not, realizes the girl loves the priest, he's just completely oblivious to it. To be fair, Dan Jurgens does a really good job with body language, so it doesn't take a genius to figure out. He's perhaps more concerned with Kol being angry with him. The morning prayers didn't bring manna from the sky (Vaal is angry!), nor even after he stops at an obelisk to pray some more (I AM KIROK! ok ok, I think I'm done with the Star Trek references... I mean if the comic is). Soldiers sent out from the city catch up to the group and Dawny finally finds the strength to fly away, but when Jhodan is about to killed, she dives back in. 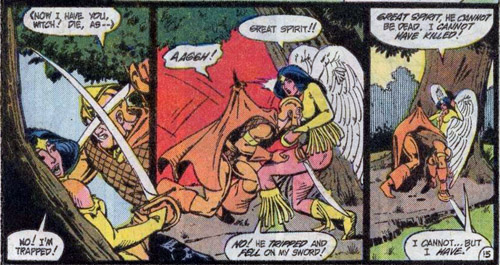 Crap, things always get bad when a Legionnaire kills someone. That Constitution of theirs is ruthless. She's so upset, she lets Jhodan kiss her. She stars to think that her tracking powers maybe led her here for a purpose (it sure isn't the missing Legionnaires), like maybe... love? They walk to a village where Brainiac 5 just so happens to be investigating some weird technology (of Earth, but not of this era), his work interrupted by a disturbance. The villagers are all running to the edge of town to kneel before... Jhodan and/or Dawnstar! 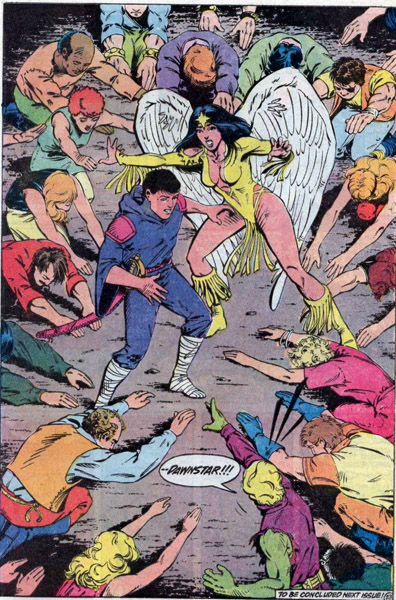 She runs into Brainy's arms, relieved that he hasn't been killed, which doesn't do wonders for her budding relationship with Jhodan. After a manly, manly scuffle, Dawnstar begs Brainy to show her the local language (he learned it lickitty-split, of course) so she can communicate with the priest and decide if she will go... or stay! But there's hardly a breather with Kol's forces hunting the heretics and creating natural disasters, and oh, a plague killing children all over the area (some common germ brought by the Legionnaires). In the end, Jhodan renounces the "strangers" so that his love can leave the planet safely. Brainy leaves him with drugs to end the plague, and heartbroken, Dawny goes home to settle into a nice bubble bath. And everything's back to normal? 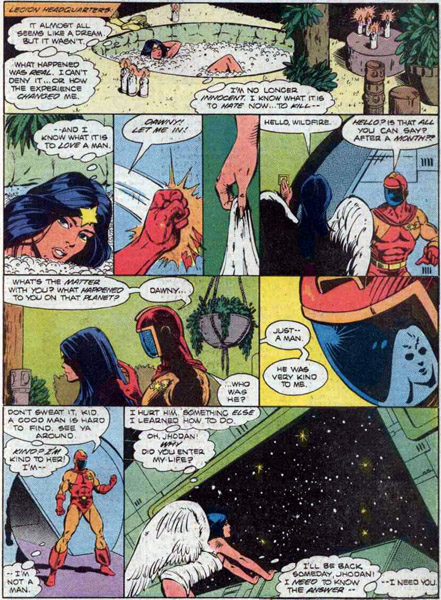 Dawnstar learned how to be a worse person. I think she's being a little hard on herself, but yeah, once you go actual body, it's hard to go back to suit filled with antimatter energy. As the old saying goes. Did Jhodan ever reappear? I don't think so. So keep on needing, Dawny.

So while Dawnstar gets a fair share of the action, it sort of becomes Brainiac's plot once they're reunited because he's trying to be Captain Kirk. Well, I guess Dawny is the part of Captain Kirk who falls in love with someone on the planet, but it seems she can't escape her fate as a romance heroine. While this story has import, in that it creates a conflict between Dawnstar and Wildfire, the adventure elements are all too subservient to the soap opera. And perhaps it's Dawnstar's inability to get out of that storyline ghetto that prevented her from starring in a couple of the reboots (especially when Wildfire wasn't around either - which is ridiculous, he's one of the coolest Legionnaires, full stop).

Who's Next? An acrobatic ghost.
Comics Legion Who's This?

RB said…
Dawn Star also appeared in Justice League: A Trap in Time, comic-wise she would be best remembered for being part of the original Monitor team in Crisis On Infinite Earths.
December 8, 2022 at 12:04 PM

Siskoid said…
I don't think you're being fair to Legion fans when you say she should be best remembered for being in a crowd scene! :D
December 8, 2022 at 2:16 PM