Who's This? An acrobatic ghost. 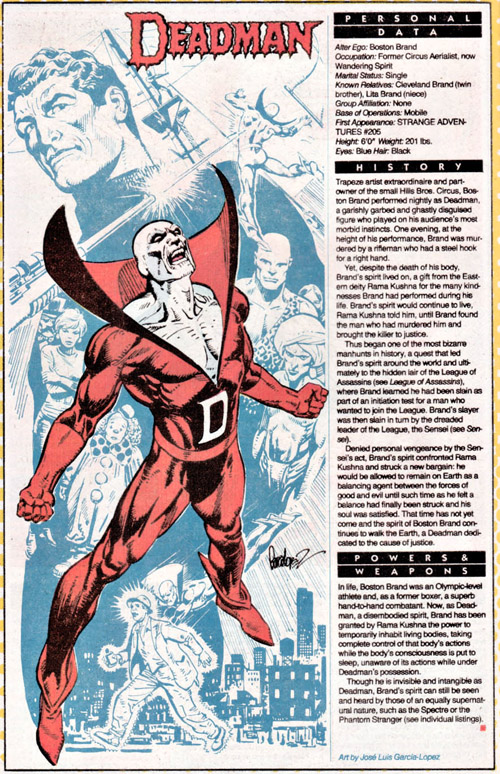 The facts: Created by Arnold Drake and Carmine Infantino for Strange Adventures #205 (October 1967), Deadman's adventures were then taken over by Jack Miller and Neal Adams, putting Boston Brand on the trail of his own killer until issue 216. Deadman would appear as a guest star or team-up star several times in the 1970s, but DC would reprint those original stories in 1985 and follow them with a 4-issue mini-series to wrap up the murder mystery, by Andrew Helfer and José Luis Garcia Lopez. At the turn of the '90s, a couple of Prestige Format Mature Readers projects starring a skeletal Deadman appeared courtesy of Mike Baron and Kelley Jones, but no ongoing series until the early 2000s, which saw a couple of short runs (one under the Vertigo imprint) and mini-series. The New52 started its anthology series DC Universe Presents with a Deadman story, and in Rebirth, we got a mini-series called Deadman: Dark Mansion of Forbidden Love.
How you could have heard of him: He's a member of Justice League Dark, not just in comics, but in an animated film (one of several appearances in animation, including his own DC Short).
Example story: DC Universe Holiday Special '09 (February 2010) "Unbearable Loss" by Scott Kolins 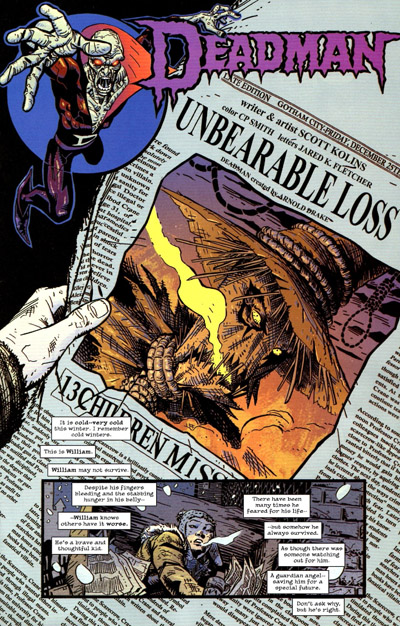 Those who expected some Neal Adams or Garcia Lopez here will be disappointed, but given the next entries I must cover, this is my only chance to acknowledge the Holiday season at our doorstep (even though Christmas isn't overt in the short story). And it also gives us a Deadman story divorced from his long story arc, Nanda Parbat, etc. What's a Deadman story without all that baggage? Well, it's a ghost story, but from the ghost's point of view. What does that mean? For one thing, it means, the intangible, invisible Deadman usually starts as an observer.

In this story, he trails Gotham City's hopeless. A homeless child, a woman contemplating suicide. That woman is the Scarecrow's mother. She didn't raise Jonathan Crane - her evil great-grandmother did - but when the villain kidnaps 13 children, she feels an unbearable guilt that makes her do something desperate: 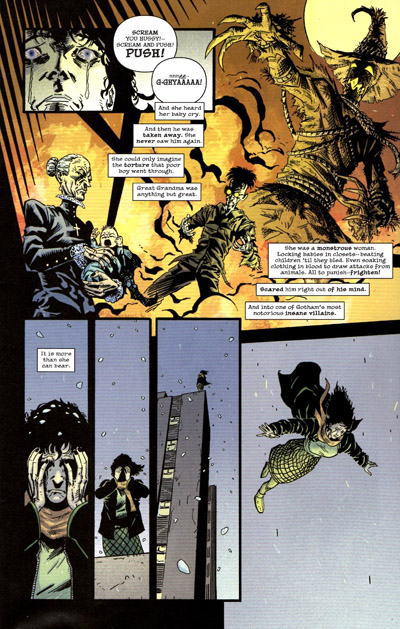 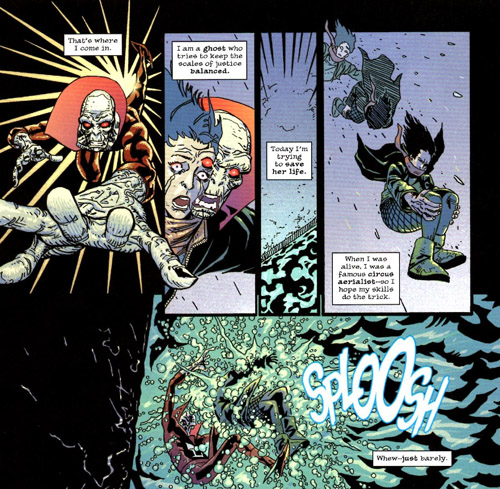 But hitting the water knocks him out of the woman and her soul is also expelled. So we get a conversation between two ghosts, one of which can still return to her body. 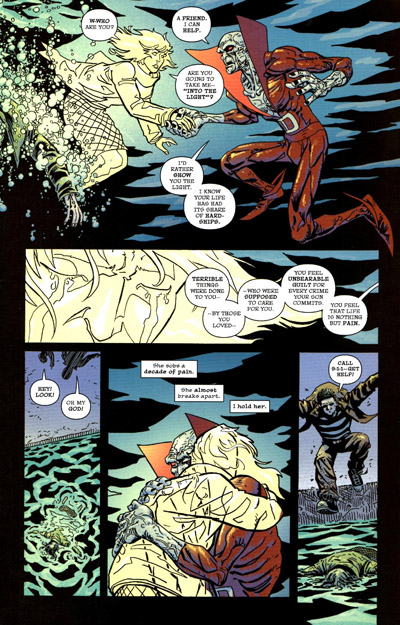 One of the weird things about Deadman for me, a not unpleasant cognitive dissonance, is that he usually speaks like Ben Grimm. He's very down to earth, in spite of the look and concept. Kolins doesn't capture that voice here, but a more mature Deadman who sees being stuck between realms as an opportunity to help people is nonetheless rather touching. He asks her to choose life, to find purpose, and she wakes up on the riverbank, soon wishing she HAD died. Batman no doubt saved those 13 kids, but the Scarecrow is still at large. The guilt hasn't gone away. And then she crosses paths with the homeless boy from the top of the story... 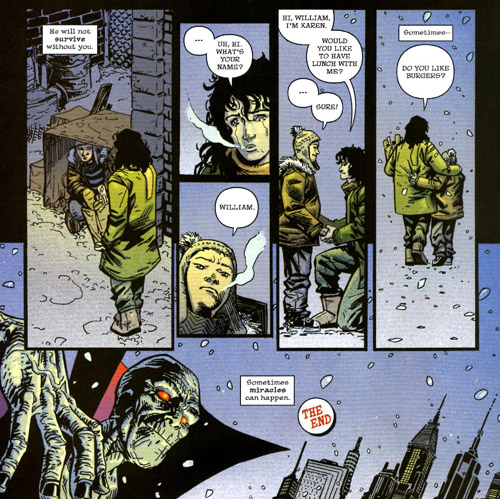 Though it's not clear how Boston Brand knew they would cross paths, he's nonetheless engineered a (Christmas) miracle. With one page more, perhaps we could have had him possess one of them (or a third party) to bring them together - that would have been cleaner and clearer - but even as it is, Deadman's ability to benignly possess people could be used for all manner of good works (or righteous retributions).

So while the original concept of a ghost trying to solve his own murder (like an extreme version of D.O.A.) is a good hook (heh), once that story's done, Deadman remains a potent and likeable "street" hero, where most supernatural heroes function on a whole other level.

Who's Next? An assassin with a death wish.
Comics Deadman Holidays Who's This?