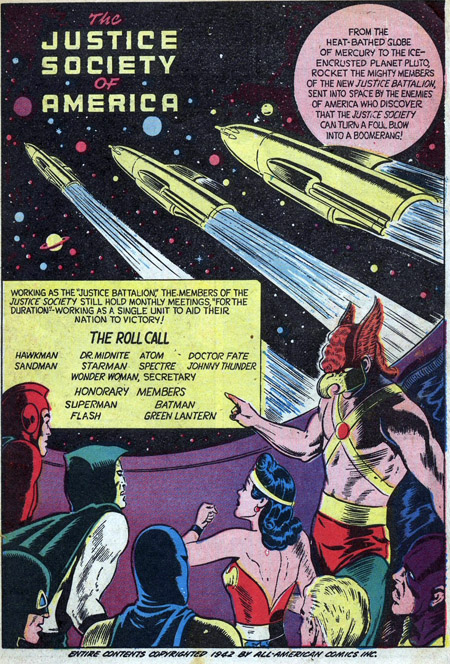 Hey, I already knew this story because Roy Thomas retold it in All-Star Squadron #50 to 59 (as back-ups), using the Crisis as a way to explain why all the planets of the Solar System were inhabited, Barsoom-like. The trips to thus OTHER-DIMENSIONAL versions of our planets were:
-Hawkman to Saturn, a world where giant birds thrive
-Sandman to Uranus (keep the bawdy jokes down in the front row), a world of crystal men
-Dr. Mid-Nite to Neptune, a world of plant men
-Starman to Jupiter, a world of mechanical men
-Atom to Mars, a world of gold-skinned men and white horses
-The Spectre to Pluto, an arctic world
-Johnny Thunder to Mercury, where a weird giant spider puts him in cage as a pet
-And Wonder Woman to Venus, a world of feminine fairies

Rather than pick any one planet, I've just used the splash page, which is EXACTLY THE SAME as the cover, except for the lettering. What happened there? Somebody about to miss a deadline?
Comics Crisis Golden Age JSA One Panel