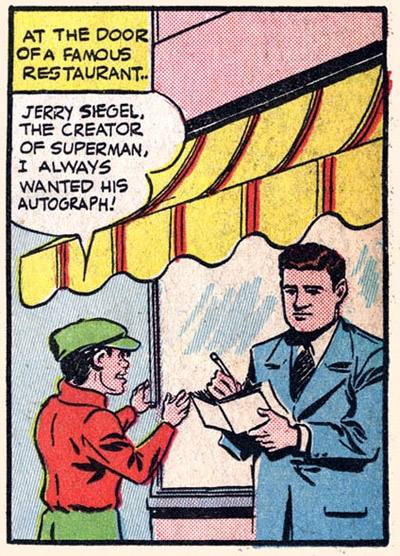 That's Robin, disguised as an autograph hunter (he also got Joe DiMaggio's signature in the previous panel), claiming that Superman's not real. Later in this issue (and a different story), his cover will be selling Batman and World's Finest comics, so now I'm confused. Was Superman created by Siegel and Shuster, or are they just putting out Superman comics based on a real hero in their midst?

Now what "famous restaurant" is this so we can all line up for a sig?
Batman Comics Golden Age One Panel Superman

Charles Izemie said…
Hmm. I'd cast my vote for Lindy's. It was pretty famous, situated in a corner, even if the rather generic illustration doesn't really match it -- what famous restaurant had such dowdy marquees? Plus its clientele was markedly Jewish: members of the entertainment industry such as Harpo Marx and Milton Berle (and one could add Jerry Siegel's name to them) and also members of the Jewish mob (I'm not saying that Harry Donenfeld was a gangster, but...).