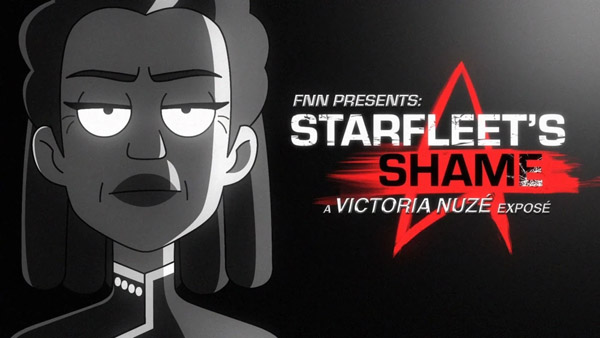 CAPTAIN'S LOG: A journalist stands to expose the Cerritos as a mess of a ship.

WHY WE DON'T: Can we question Picard's decisions like that?

REVIEW: In a way, Captain Freeman's Project Swing By means to make overt and intentional what was already hard-coded into the show. The Cerritos often ends up revisiting places, people and concepts from previous Trek series, so why not make it part of its ongoing mission. In this case, the revisit the TNG episode "Symbiosis" in which Picard cut the planet Ornara off from its "medicine" (drug) supply and Brekka from its one "trade partner". And in episodic television fashion, the Enterprise leaves, never to think back on these people again. While in a way it can be damaging to highlight such things, I do love Ransom's reaction - "oof, yeah, erm, that's the way it went down" - and there are a lot of seemingly minor decisions (in minor episodes, I mean) from all the series that would leave other crew aghast. (In fact, the reporter in this story highlights many of Freeman's, but I'm getting ahead of myself.) The Ornarans don't need help, though they obviously went through a rough patch, now a culture of physical fitness addicts. The Brekkians, well, we're not sure, because the more immediate problem is a Breen invasion. Yay! I love those guys (and love the bit with they voices on the hail).

The complication, however, is that Admiral Buenamigo has embedded a journalist on the ship to report on the pilot mission. Knowing some of the shenanigans her crew can get up to (especially her daughter), Freeman freaks out and locks up, leading to tragedy. Though it plays well enough as a twist that Mariner gave the ship and her mother a glowing report - all the bad, out of context stuff came from other interviewees, though not maliciously - on the rewatch, it's obvious that Mariner is as supportive and positive as she's ever been. The tragedy is that, even though Ransom is well impressed by now, her track record means her mother immediately believes she screwed things up by speaking to Victoria Nuzé (played by Alison Becker, well used to playing reporters - she was one in Parks & Recreation). While misunderstandings are a sitcom trope, the way this is handled creates a human moment where Mariner stepped into someone else's poo and has no idea why everyone's on her back and won't believe her (including her paramour Jennifer). The Lower Decks gang is supportive, but still thinks she might have said something she shouldn't. And so Mariner is transferred with all haste to the dreaded Starbase 80, where everyone seems to be an idiot (some fun jokes result). And from there, she resigns from Starfleet and joins the archaeologist from Reflections... man, are we sure THIS isn't the season finale? It's sad, because this was Mariner's pattern before she found this particular group of friends. She causes trouble, she gets transferred, so of course, the Mariner from Season 1 was flippant and guarded. But by this point, she's bonded with people, actually loves her ship, is doing well, and bam, heartache. Ransom's reaction is again a strong one (he's the secret MVP of this episode), but because he's in charge of Mariner, he can see how this is an overreaction.

The other important thing that happens is the introduction of the Texas-class, computer-controlled, unmanned starships designed to effectively replace the California-class. That's a wrong-headed idea for Star Trek, but the show knows it. Another great moment is Freeman asking what the hell just happened as her media attention is diverted by what can only be called a stunt on the part of Buenavista, who absolutely turns the aftermath of a ship battle into a press conference. The Cerritos walked right into that one, and while we'll only figure things out in the next episode, watching this one with hindsight highlights a lot of clues. Who puts the journalist on the mission? Notably, who gives them the idea to check Brekka out?

REWATCHABILITY - High: It's got a human story and sets up the finale with lots of twists and surprises.
ST Reviews: LD Star Trek