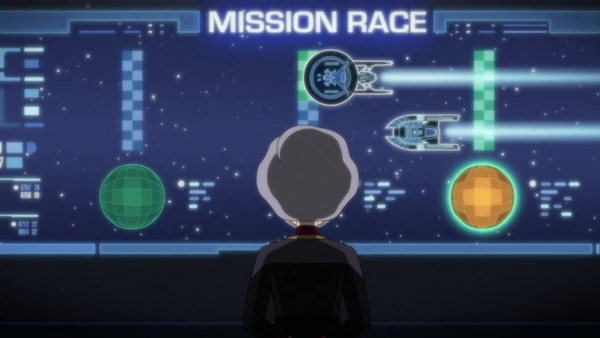 CAPTAIN'S LOG: The Cerritos must prove its worth against the new Texas class.

WHY WE LIKE IT: California-class for the win, and winning with lots of action.

WHY WE DON'T: Why does a different captain get the last triumphant speech?!

REVIEW: So Buenamigo is revealed one of those bad faith admirals and he's been scheming to get his Texas-class autonomous ships to replace the California-class (and beyond, I'm sure) for a while. The clever bit is that the ship A.I. has the same interface as the M-5, which went bad in TOS's The Ultimate Computer, and it has the same daddy issues too. An early clue was in Reflections, where the same interface was seen in original-attitude Rutherford's work, so yes, Buenamigo wiped his memories and personality, and the same flawed program gave us Badgey (who turns up in a post-credit scene, which leads me to believe the next season will be all about evil A.I.s). It's all coming together, and Buenamigo pays for his hubris with his life. Lots of other deaths too when the Aledo attacks the station. Pretty ruthless for a cartoon show, which makes you believe really bad things could happen.

But it all started with Captain Freeman trying to prove you can't remove the human element from Starfleet operations by suggesting a mission race between the Cerritos and the Aledo. It's a fun way to address the issue, and the stakes are well spelled-out: If the whole class is mothballed, all those ships' crews will likely end up on dull outposts, a lucky few spread across the fleet. And yes, the Texas-class is very efficient, but when Tendi finds a microbe on a desolate planet, the whole crew stops to assess its possible sentience. The Aledo doesn't even slow down to beam its outpost modules on the surface. That's the proof that you can't automate this stuff... and that's when Buenamigo shows his hand, gives the Aledo full autonomy to destroy the Cerritos, and all hell breaks loose. By the end, we'll have had 3 Texases, a Sovereign, and the Cerritos dropping its warp core at the baddies from warp (accidentally clever: they make a joke of Ransom teaching the crew the "Riker Maneuver", i.e. a weird way to sit down, but throwing your warp core at pursuers was the Riker Maneuver in Insurrection) and having to be saved from the still-functional Aledo by Mariner (of course) and every California-class in the fleet (cool!). We see a lot of familiar faces from the series in that show of solidarity.

Mariner thus returns to the Cerritos after a stint as an archaeologist. There wasn't much to this subplot, sadly. Petra acts cagey about who's financing her operations, Mariner does a bit of snooping, it's Picard, so nothing there, really. When she gets back to the ship, she's slightly more mature, wanting to make a real go of it in Starfleet... but that's where she was before she left in the previous episode. And no room to address her relationship to Jennifer, who does not appear. Another thin subplot is Boimler hurting Shaxs' feelings with an impression and then trying to make it up to him. There's so much happening, it gets lost in the shuffle, but eventually completes the pass by turning into a Worf joke of sorts. Since Season 1, Shaxs is always heard recommending they jettison the warp core, but is always ignored. Just like Worf spent the majority of TNG recommending aggressive action, but always being shouted down. Boimler is the one who forces the officers to actually consider the option this time, repairing his relationship to the tactical officer. Aw, baby bear!

Another completed pass here is the arrival of T'Lyn, the Vulcan ensign from the previous season's "wej Duj". I'd pegged her as a possible cast member, and now here she is! I wonder if there was some kind of fan activity that brought this about. She has a very different personality from the quartet, so her interactions with them should freshen things up.

LESSON: It's all about people.

REWATCHABILITY - Medium-High: Big, big stuff happens and a lot of plot lines converge, but that means some are necessarily given short shrift (like the Mariner subplot).
ST Reviews: LD Star Trek