Category: The Orville
Last article published: 31 December 2020
This is the 30th post under this label

"He was as passionate or as stoic as we made him in our minds." 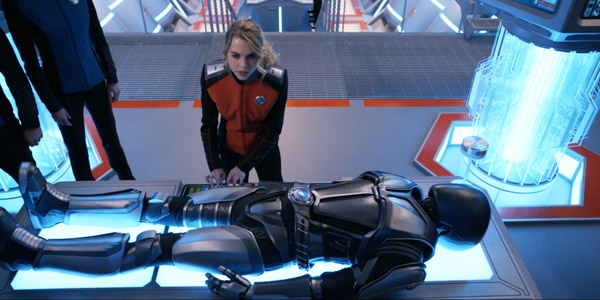 IN THIS ONE... Navigator Charly Burke joins the crew, but she harbors negative feelings about Isaac, since the Kaylon killed her friend.

REVIEW: The second season ended a couple years before the third (dubbed New Horizons) - COVID don'tcha know - and on a different network. So that battle with the Kaylon is pretty far. Not to the characters, of course, and Electric Sheep uses their memories and trauma to recap what had gone before, and how it obviously had to impact the crew's perception of Isaac, who was used as a Trojan horse against them before he could rally and betray his people. Still, a lot of people harbor resentment and they are given a voice through a new navigator (LaMarr was never replaced when he went to engineering), Charly Burke, a young woman who lost someone dear to her in that battle and doesn't see any reason to forgive. She was just transferred, so we might be understanding, but a lot of people walk away from him and even Molloy - a character we like - is on her side, though his is a healthier attitude.

So is this a big "racism" episode? It's darker than that. Isaac ends up committing suicide, frying his circuits and wiping his hard drive after leaving an extensive technobabble last will and testament/suicide note. And from there, the episode becomes an examination of suicide and the way people grieve suicides. It's a little didactic, in a TNG kind of way, but shows enough diversity in the crew's reactions - LaMarr remembers small moments, his spiky girlfriend respects the choice, Mercer offers a great eulogy, Ty tries recreates him in the holodeck, Claire is numb but eventually breaks down (Penny Johnson is this show's greatest asset and I hope they know it), and Marcus blames himself for having told Isaac he wished he were dead and committing a hate crime. If someone you know took their own life, don't be surprised if you feel the emotions rise to the surface during this one. The point that's made is that when one is suicidal - even with the cold logic of a mechanical life form - one can't imagine a better future, and Isaac didn't allow for the possibility of change. He understood the crew to be inefficient and distressed while he continued to exist and did what seemed logical, but there was data missing.

The suicide is eventually undone - though at the start of a season, just like at the end of one, you might believe it's true for a minute - when LaMarr finds a back-up chip in Isaac's head. The data could be retrieved and only Charly, with her abstract talent for four-dimensional geometries (not quite sure what it means, but they'll find many uses for it this season) can do it. Except she won't, even if it means the end of her career. Until Marcus, filled with regret, asks her to. It's a bit cursory - we go from that scene directly into the attempt and it's quickly done - but she does it for him, not for the Kaylon who she continues to hate. Unlike a standard Trek episode, the conflict character doesn't go away and doesn't learn her lesson. This ISN'T Trek and there's no Roddenberry to wave people away from prejudice, which will either be most interesting, or get tired after a while. One definite flaw is that no one stops to ask if they SHOULD resurrect Isaac. If you'd come upon a suicide, and there was time, you'd try to save them, agreed. But so much time passes - there's a whole FUNERAL - that it seems like playing God here. It's the right choice, and Isaac recognizes his mistake (which is part of the point, he can be reactivated, we can't), but the ethics are taken for granted.

It's not a question of time either, because now that the show is on Hulu/Disney, it doesn't have to conform to a time slot. Electric Sheep is almost 70 minutes long and it's one of the shortest of the season (which is why I was delaying doing these reviews). While the topic warrants slowing things down and crafting more characterization scenes, a times it all feels rather padded. It's not the talky bits, it's the spectacle. The episode has a new opening sequence filled with special effects (and is it longer?), and the rest of the episode feels like that too. There's a huge spacedock, lots of ships, people walking on the hull, reenactments of the battle, and in case you're getting bored with the "issues", a Kaylon attacks out of nowhere. While some of this is germane to the story, that attack barely figures into the plot (it just makes the back-up destabilize, putting a ticking clock on when Charly should see the light). Similarly, the episode introduces the Pteradon, a new one-man fighter craft, with a long shakedown sequence. It isn't used when then the Kaylon attack and in fact won't be used for a few episodes. Walking around new sets, like the Quantum Core room likewise seem only designed to show off the budget, and we'll get a lot of such things going forward. Seems like every time someone returns in a shuttle, we have to see the shuttle approach and land, instead of just cutting to the next scene.

The greater length, I think, is warranted by the complex topics being addressed, among them the notion that androids DO dream of electric sheep (i.e. that Isaac does "feel" without feeling, something that will be revisited later in the season). But the big special effects sequences don't support that part of it, and the show comes off as progressively more bloated as a result. I'd rather have had more time with characters neglected in the opener, like Bortus, or even just Mercer and Grayson. But big shout-out to BJ Tanner (Marcus), really coming into his own as a young actor here. He has a lot to play, both broad and subtle, like his lurking out of doors and instead of speaking, just lets the emotions play out.

WHERE SOMEONE HAS GONE BEFORE: Racist crew members have been a sporadic part of Star Trek since Balance of Terror, but never as a regular. Closer to this story, Data was the victim of a kind of "racism" several times, and Worf and Odo had to serve at Federation posts while at war with their people. Speaking of Worf, his dilemma about donating blood to a Romulan in The Enemy echoes Charly's choice of whether or not to save Isaac's life, and he faced his own thoughts of suicide in Ethics.

REWATCHABILITY: Medium-High - Hey, remember when this was dumb comedy?
The Orville