What a Card: David Marcus

Being a look back at cards from the Star Trek CCG, and what I thought of them back when they were fresh and new... in EPISODE order. The third scene in Star Trek II is where they discuss the Genesis Device with the Marcuses. It gives us one card... 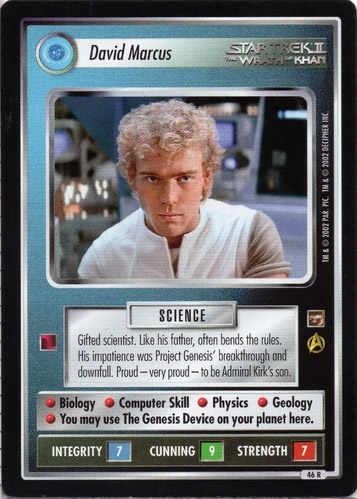 PICTURE: The background is blurry enough to have the main object of the pic draw all our attention, yet you still get that he's in a laboratory environment. A lot of David's seriousness and mistrust come across, and his hair is somewhat reminiscent of his father's movie-era weaves. Bonus CG: A technician was removed from the background. A 3.6.

LORE: A lot of nice stuff from his two movie appearances. The first phrase is simply a brief context, but nevertheless true. The second was shown in ST III when we learned he used proto-matter to solve some problems with the Genesis Device, a parallel to his famous father, Captain James T. Kirk's own "cheating". Then there's the irony of the breakthrough becoming the downfall of Genesis. Great stuff. And finally - it's not my favorite line, but hey - we have a paraphrase of his final scene in ST II after he's learned or his genetic origins. Good job! 4.3.

TREK SENSE: How do you come up with the Genesis Device? Since it restructures a planet so it can bear life, Biology, Physics and Geology all make absolute sense. The matrix has to be programmed into the machine, so Computer Skill is there too. If he was that "gifted", he might have gotten a x2 in there somewhere, or another Science, but having such varied fields in your skill box may be enough. Plus, he had help from his mother. Oh, and his Cunning's pretty high. The special skill allows him to use (or "test") the Genesis Device even if the Federation is usually restricted from doing so, a logical way to work around the limitation. In a sense, his presence sets the time period to BEFORE it became banned technology (of course, the CF era is necessarily in the game's past, sigh). The nature of the character makes a tragic accident that puts a mission at 0 points quite possible. Integrity's enough for him to give his life for Saavik, while still "breaking the rules". Strength is way too high however. Or was that pitiful struggle with a Klingon warrior enough to warrant it? I say thee nay! Everything else is well done however, so he hits 4.1.

STOCKABILITY: You've got a very complete SCIENCE personnel here, great for those kinds of decks, whether you're going for planet or space missions. There's actually more incentive to send him to planets because of The Genesis Device actually. First, to acquire it, then to place it atop a mission to double its points. That Geological Survey was never worth so much! ;-) One note on the Device: May I suggest putting it aboard a Cryosatellite (maybe with David there)? That'll make the acquiring mission your space, and with any luck, the doubled planet will get you to 100 points. There's also the idea of making David evil and allowing him to destroy or double your mission's points then follow that up with No, Kirk... The Game's Not Over to destroy all opposing cards there too. Don't step on our lawn! The Feds can use nasty tricks too! And with his many skills and high attributes, he'll help out with the mission attempt(s) as well. A strong 4.5.