What a Card: Khan

Being a look back at cards from the Star Trek CCG, and what I thought of them back when they were fresh and new... in EPISODE order. Next, Chekov finds Khan on a desolate planet, so let's get to the big man already! 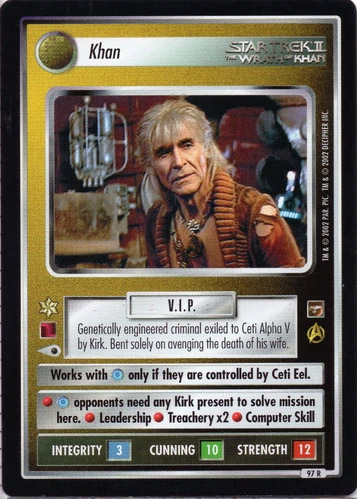 PICTURE: Khan is as sly as ever here, and the earthy tones are good, but the background of the Botany Bay is just too baroque and distracting. The slight fuzziness doesn't help things either. Khan loses presence from it all, and if it's one thing that shouldn't be compromised in Khan's case, it's presence. Doesn't go above a 3.

LORE: Abbreviated because of the restriction box, they limit themselves to the events that made him a movie villain. The mention of "genetically engineered" is appreciated, but makes me miss the fact that there's no way to use that in 1st edition. Good motivation. It just doesn't quite elevate the card to the required level. Still better than average at 3.3.

TREK SENSE: Quite a number of things to address here! Ok, I have to start somewhere, and the classification bugs me. How small can a society be before its leaders can no longer be considered VIPs? Khan from TOS, sure. Khan from the ST II? I dunno. An exile and renegade, he should either be Civilian like the rest of his group, or an Officer because he commanded a ship and was, after all, a military leader on Earth. It's not outright wrong, but I feel it could still be better. Speaking of his leadership skills, the Command icon is absolutely dead on, of course, and the Leadership skill itself a must. Again, though, I would propose a change: The sheer charisma of the man warrants Leadership x2. In TOS, this was clear just from the way he handled McGivers. In ST II, he gets questioned (he's off the deep end, after all), but his group still follows orders. It would also make him a charismatic match to Kirk. Of course, Leadership x1 isn't wrong per se, and I could easily take the other point of view. Khan had a hold on the past-obsessed McGivers, but not anyone else in Starfleet. The fact is, he WAS questioned by Joachim, etc. Am I gonna straddle the fence like this throughout the review? As I see the issue of the restriction box come up, I'll have to say "maybe". I don't see anything wrong with that restriction, since the Feds are the good guys and Khan is a bad guy. It's just that other bad guys in the game rarely get the same treatment. A short list of NA baddies reveals Bok, The Albino, Raimus, Etana Jol, etc. Other NAs could also fit, but are iffy in the sense that the Feds probably wouldn't want to work with them (Martia, Altovar, Penk, etc.), and some have SEEMED to work with Feds, only to betray them (Jo'Bril, Barry Waddle, Sharat, etc.). Khan fits the first category, definitely, and warrants the restriction, but there is just no standard for this. Maybe NAs should have been divided in two (good/bad). After all, though Ceti Eeled personnel will work with Khan, why won't the Terran Empire? They're like-minded, aren't they? Would have saved on restriction box space too. Now, Khan's little war against Kirk and, by extension, Starfleet, is represented in the special skill. He wants/needs access to Kirk, and is willing to stonewall Federation mission attempts until he gets his wish. In the Ceti Alpha system, he prevented Reliant from completing its survey mission. He later prevented the Marcuses from completing their Genesis experiments. Bring Kirk to Khan, and he'll quickly forget about stopping the mission, and at the same time, Kirk can complete a mission under his nose (if only to spite him). If we're all in the same time period, the revenge scheme will play itself out with fatal results thanks to the Nemesis icon. A sensical match-up (and I like the color, just like Khan's heart), but you gotta wonder why it won't work on other versions of Kirk. Wrapping things up now... Treachery x2 and low Integrity are called for, of course, with the slight bump in Integrity being due to loyalty to his people. Computer Skill is there because Khan learned quickly how things worked on a ship using a computer console in "Space Seed", and seemed to work them fine in ST II as well. His genetically engineered mind and body give him high Cunning and Strength. Hard to gauge his overall Trek Sense, but there's a lot more good than there is bad (and the bad wasn't all that bad to begin with), so 3.9.

STOCKABILITY: The cornerstone of any Revenge Is a Dish Best Served Cold strategy, Khan will nevertheless be useful in other situations. But starting with RIADBSC, this objective allows you to score 30 points per turn for doing nothing but having Khan and The Genesis Device on the USS Reliant (which he commands) AND allows you to report Khan and his cohorts (who name him in their lore) to report to that ship for free, a ship, might I add, that was downloaded by RIADBSC in the first place. It asks you to sacrifice all other personnel at the end of your turn, but you can keep anyone in play by using Ceti Eel on them, which again, requires Khan's presence anyway. This can be done to your own personnel (even Feds who normally don't work with him), but it can be used to "assimilate" opposing personnel too, which makes Khan a very dangerous man indeed. Where present, he's got a whole bag of tricks. He can drop a Ceti Eel on you, he can throw you out an Airlock (probably will with those attributes), kill with I Do Not Take Orders From You!, and he's a tough one to beat in personnel battle because of his STRENGTH (he initiates with Leadership). If you play your cards right, you could take out as many as 4 personnel with Khan alone! Against the Feds, there's even more. His very presence at a mission means it cannot be solved (attempted yes, solved no) unless they do away with him (aww, those darn battling restrictions) or have any Kirk handy. Watch out which one is used though, since Khan can discard Admiral Kirk with his Nemesis icon (I recommend a Wajahut/Reliant relocation). Of course, that's a double-edged sword, so be careful. A Kirk will also halve RIADBSC's points, grrrr. The high level of Treachery opens up a few strategies, like Protection Racket and The Art of Diplomacy (for weaponly goodness), and saves him from Sabotaged Negotiations and Inside Collaborators. Sure, RIADBSC is a tough round-the-corner strategy to pull off, especially when your opponent sees you attempt it, but even outside of that, Khan can do a LOT of damage. A strong 4.5.