What a Card: Mas'ud

Being a look back at cards from the Star Trek CCG, and what I thought of them back when they were fresh and new... in EPISODE order. We've had Khan, he needs followers... 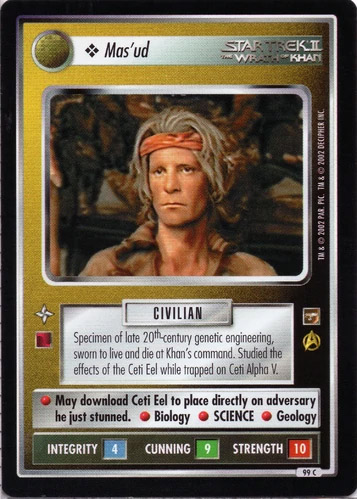 PICTURE: Pulled from a group photo of the Ceti Alpha V family, Mas'ud seems to have been airbrushed to the point of looking like a painting or plastic doll. Better than a blurry grease spot, but still a little weird. I appreciate the work done and won't go below 3.

LORE: "Specimen" used to signify universal? I like the originality. The rest is well-written too. That last part is an invention, but a sensible one, which ties into his special skill. A good 3.7.

TREK SENSE: Typical of Khan's men, or at least those interested in Science enough to take a peek at the wonderful gift of nature known as the Ceti Eel ;-). Is there anything beyond those genetically-engineered intellects? Science is coupled with Biology to study the Eels, and Geology because the only habitat on Ceti Alpha V is sand. None of Khan's crew were anything but Civilians, but they do have a Staff icon to help them fly a ship (though Reliant really only needs the CF icon). Loyal to Khan, but on the wrong side of history anyway, that's a 4 in Integrity. Cunning and Strength have been genetically enhanced. The special ability makes him an Eel wrangler, which works ok, but I wonder where he puts the Eel to produce it during a battle. At least he waits for you to be stunned before shoving the creature up your ear. I guess my objection is to the download itself. Takes us to a still quite good 3.7.

STOCKABILITY: Khan decks may center around Revenge Is a Dish Best Served Cold, which discards any personnel either not in league with Khan (like Mas'ud) or who have a Ceti Eel placed on them. RIADBSC also allows Mas'ud (any number of him) to report aboard the USS Reliant for free. But for that round-the-corner strategy to work, you need to solve at least one missions to acquire The Genesis Device, so Mas'ud has good skills and attributes to help. Even without Revenge, he's a good choice for using Ceti Eel simply as a cheap "assimilation" technique. Khan's crew should be good at battle with that high STRENGTH, and Mas'ud definitely shouldn't find it hard to just stun someone. Multiple Mas'uds means you can very easily empty your deck of Eels, as you take command of all opposing personnel in sight. Throw his also-universal compadre Sarod into the mix and you can get card draws out of each Ceti Eel. A nice little combo that does a fair job of balancing out the disadvantages related to some Khan strategies. A 3.8.