Who's This? A rhymer. 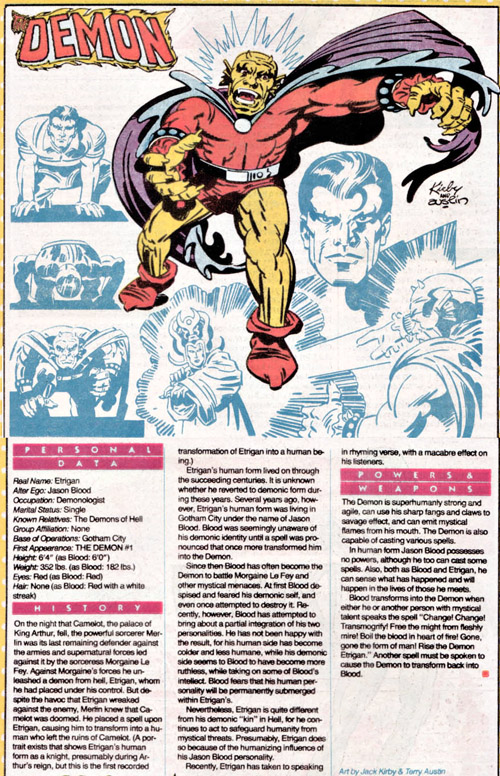 The facts: When Jack Kirby was asked to create a horror character, he was inspired by a demonic mask in Prince Valiant to create Etrigan, a demon bound to a human being, Jason Blood. Kirby was not particularly interested in doing the book long term, but after it premiered in September of 1972, it became more popular than the Fourth World comics, which were cancelled so Kirby ended up doing 16 issues. While Etrigan appeared here and there for the next decade (mostly team-up books, including an issue of DC Comics Presents where he suddenly rhymes all his dialog, which has been the character's trademark ever since, give or take being used by writers too lazy to do it), his star started to shine again in 1984 when Alan Moore used him in Swamp Thing. A mini-series by Matt Wagner in 1987 led to a strip in Action Comics Weekly, and then in 1990, Alan Grant and Val Semeiks got to do a monthly that lasted 61 issues, including Annuals, handing the baton over to Garth Ennis and John McCrea as of #40. A mini-series called Driven Out was published in 2003, and John Byrne did 17 issues of Blood of the Demon starting in 2005, ignoring past continuity. In the New52, Etrigan was inserted not only in the Medieval super-team the Demon Knights (lending them his name), but also Justice League Dark in the present day.
How you could have heard of him: The Demon is not only still used regularly at DC Comics today, but has also appeared in all the cool animation projects - The Brave and the Bold, Justice League Action, Young Justice, The New Batman Adventures, Justice League (Unlimited and not), and the Justice League Dark movies. Arguably, of Kirby's 1970s DC creations, only Darkseid has enjoyed more visibility.
Example story: The Demon #40 (October 1993) "The Wild One" by Garth Ennis and John McCrea 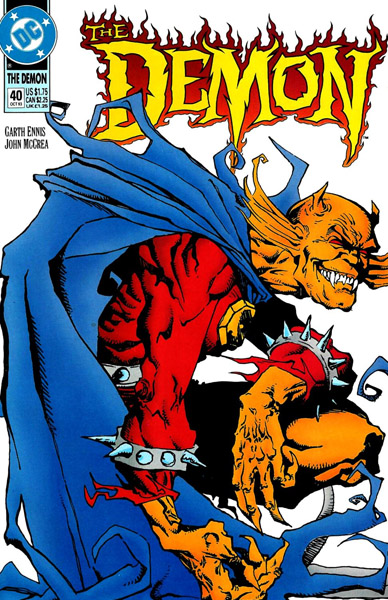 As much as I love Kirby, his Demon didn't rhyme and mine (my head canon's) does. I went for a later story (1993), the first issue by Ennis and McCrea who would birth Hitman in this very series before spinning him out on his own. Expect dark comedy and irreverence, but to be fair, Alan Grant's take on the character, built over the last 3+ years, had already pushed the character into that space. Anti-heroes (which Etrigan definitely is) are normally played in two modes: Serious and gritty (Punisher) or MOCKING that self-seriousness (Lobo). In fact, see if you can spot the Marvel anti-hero that was snuck into these pages.

Our story begins with some bikers trashing a church in Gotham City, one that looks like a Medieval castle, which is a perfect touch from McCrea - the Demon is/was an Arthurian character (in the DCU, at any rate, I don't remember him from La Morte). The desecration is all part of a ritual to summon a veritable Hell's Angel: Johnny is soon possessed by his lord Brandor and the "Marlons" are super-stoked and ride off, leaving the church in flames. The next morning, Jason Blood, drawn to the smell of brimstone, investigates the ruins. He doesn't personally know what devil might be behind it, but he's got a partner he can call on. 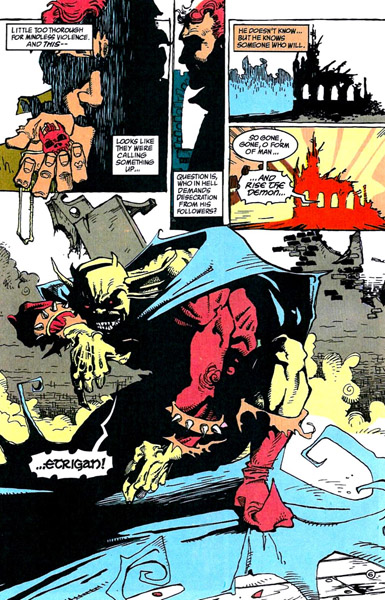 I'm all about this transformation - not the first poem I learned by heart, but close - so I had to include it. And Etrigan agrees with Blood that this is worth looking into: "A shattered church, a rotten smell - dear Blood was right, 'tis one's from Hell." Throughout, Ennis shows he's quite good with the rhyming, even the meter is correct. Etrigan has his own summoning powers, and he calls an old rival from when HE was in something like a bike gang, a foe called, well, this is a Garth Ennis comic... 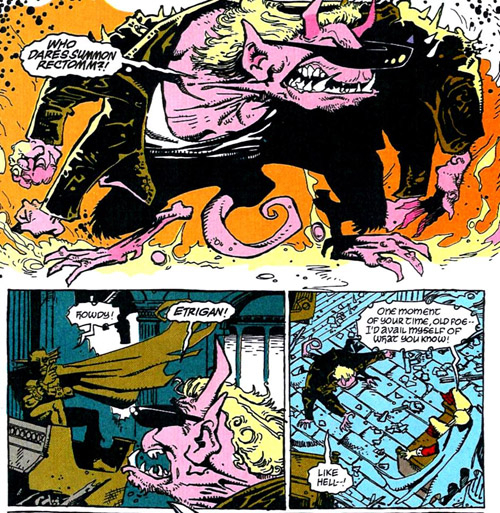 "Howdy"? Rectomm hates Etrigan for slaughtering his gang, eating his brother, feeding his mother to hell-gerbils and stealing his girl, uhm, Smegma (not all these fruits are high on the tree), but the Demon needs info and he doesn't have time for all this posturing. 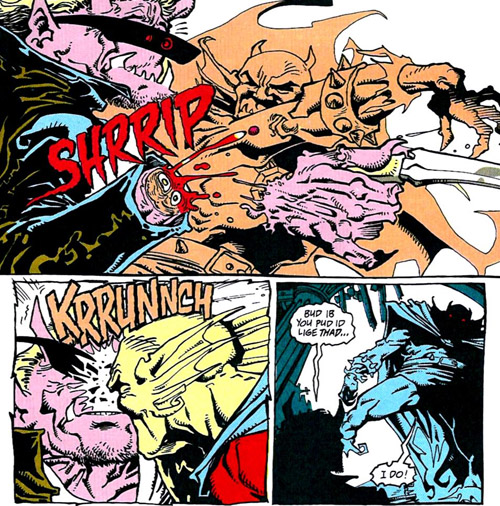 The Marlons are heading for Gotham Cathedral to repeat the ritual on a larger scale and open the gates of Hell, and if you're wondering why Etrigan cares, it's because Gotham is his turf and he doesn't want any more demons there. It's not about saving the city or whatever. But will he be in time? Cuz the Pitriders are already on their way. 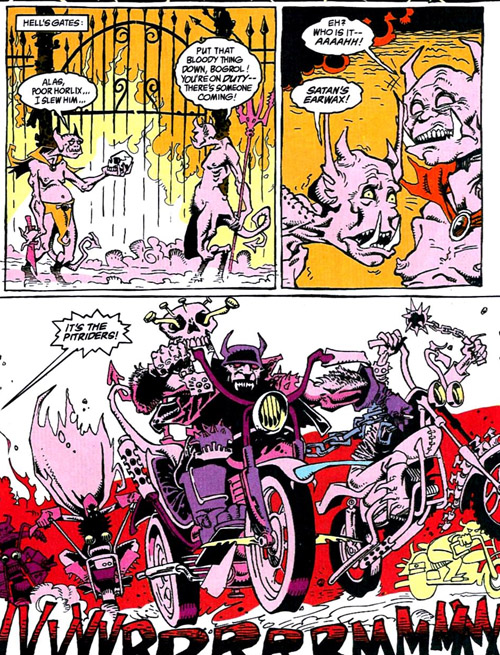 Now normally, sacred ground like a cathedral would be problematic for demons, but this is Gotham and there's not enough faith to make it toxic to Etrigan's ilk. Cue hyperviolent sequence in which he kills the Pitriders' host bodies before they can be possessed. 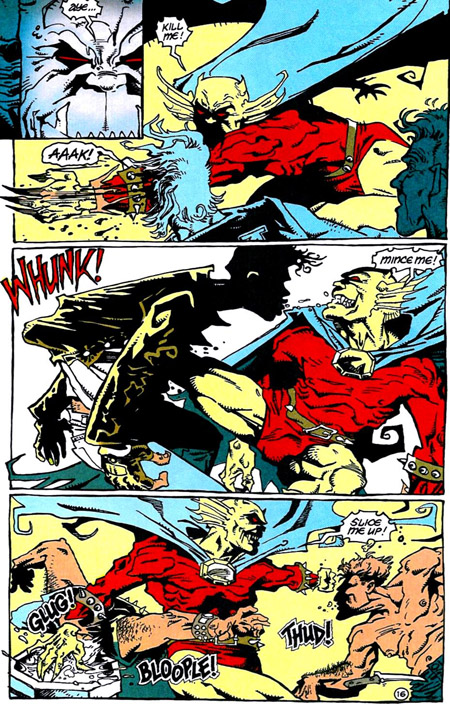 After some devastating claw hits and holy water drownings, Etrigan blasts most of them with his hellfire breath and burns them to a crisp. Brandor decides to run and jumps on his bike. But the Demon catches up to him and pulls him out of his host. 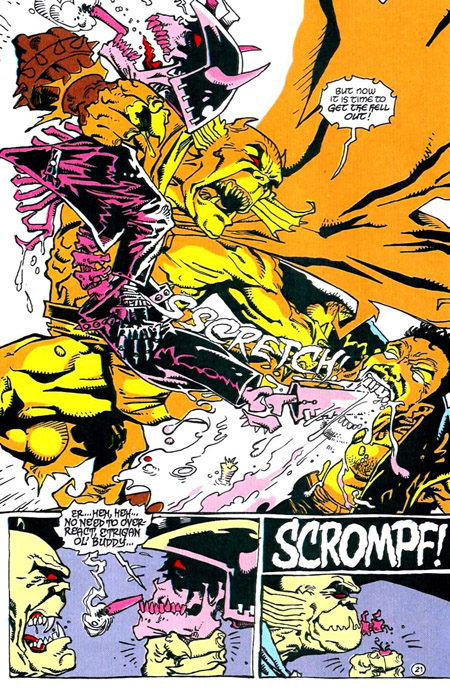 We did learn Etrigan ate other demons earlier... But wait, this wasn't ALL Brandor's fault. What about devil worshiper Johnny Basterson? Etrigan burns his face off, and... 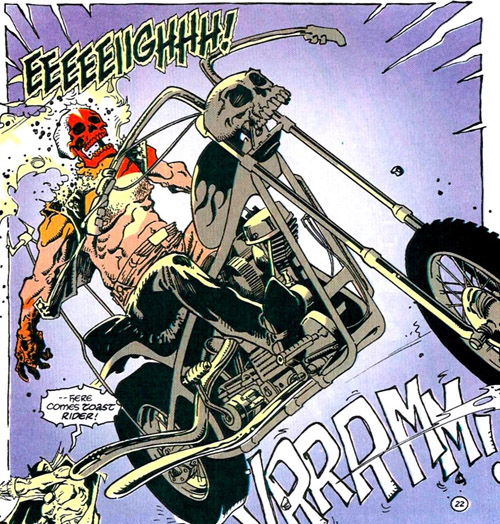 And there you have it, as promised. Johnny's ride hits a gas station, it explodes, Etrigan walks through the flames laughing his head off, and so begins a new run on The Demon.

What are YOUR feelings about the Demon? Should he have a sick sense of humor, or be more dour? Do the rhymes bug you (like they evidently did John Byrne who did away with them)? And should Jason Blood welcome his partner's help, or act more like Bruce Banner? I've enjoyed various interpretations, what about you?

Who's Next? A snake in the grass.
Comics Who's This?

Doc_Loki said…
I have a great love of the Grant/Semeiks Demon run, and would cheerfully buy it in whatever format DC chose to reprint it.
January 21, 2023 at 7:52 AM