Reign of the Supermen #165: Nightwing 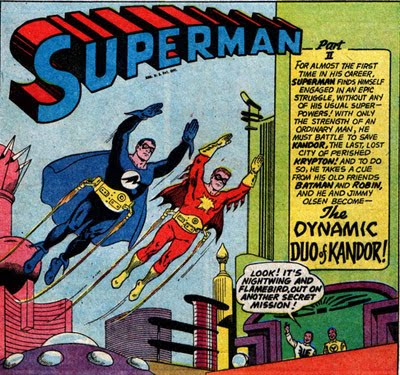 It's that time Superman and Jimmy Olsen took their cue from Batman and Robin inside the shrunken Kryptonian city of Kandor! And here's how it came about...

It all begins when Kryptonians start stealing rare elements and whole laboratories. Superman finds his Fortress of Solitude broken OUT of and discovers it's a handful of Kandorians who have found a way to enlarge themselves and believe Superman has been holding out on them. When Superman and tag-along Jimmy go down into the bottle (where Superman is powerless), they find the whole population now regards him as the Saddam Hussein of Krypton. 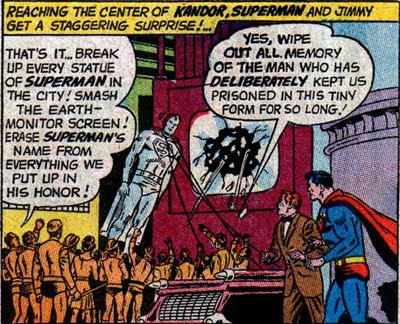 After escaping stone-throwing mobs, the duo finds refuge in the house of an old family friend, Nor Kann, who is destined to become an Alfred Pennyworth analog. He brings them down to his underground cave, in which he keeps two examples of Kryptonian fauna, a nightwing and a flamebird. In no time at all, Supes and Jimmy are wearing new costumes, riding around in the Nightmobile, and trying to stop the rogue Kandorians from making a terrible mistake - the enlarger ray only works for a brief time and will make things dissolve over time! - with the help of trusty, jet-powered, utility belts. Oh, and to foil the telepathic hounds of Krypton, these... uhm... hats. 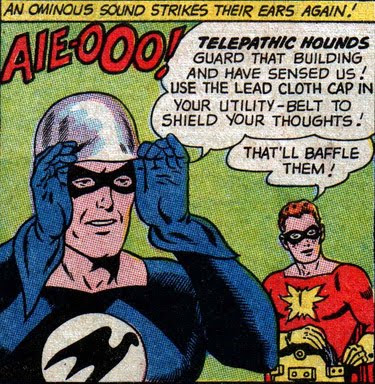 "Nightwing" tries to infiltrate the bad guys' facility as Van-Zee, his own cousin and body double, but he's captured. Van-Zee, dressed as Nightwing, along with Flamebird Olsen and the Superman Emergency Squad (featured in Reign eventually) break him out, and the two heroes escape the bottle and hide in the Phantom Zone while the rebels run off with the entire bottle. To explain why enlarging Kandor is a bad idea, Superman enlarges a miniature Eiffel Tower and waits THREE WHOLE HOURS before it disintegrates. Jimmy now sees why there's so much urgency! Three hours is about how much time it took the Kandorians to enlarge their city somewhere on Earth, so when Superman gets there, he's got a fight he can't win on his hands. He is captured. The sentence is death by kryptonite.

Just as he's about to die, Kandor starts evaporating and he saves the city by shrinking it down again. The population considers him a great hero again. 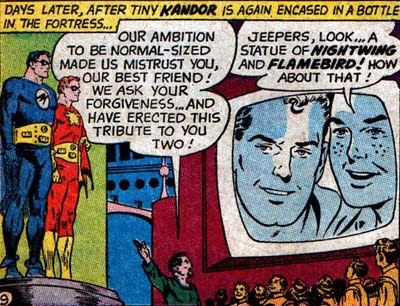 Krypton: It's only ever been about the statues.

And the legend continues...
In Jimmy Olsen #69, a few months later, the Dynamic Duo of Kandor would get together again to fight ANOTHER Superman... so that's a story I'm logging for another day. They return the next year, this time with Batman and Robin, in World's Finest #143, which is how a certain Boy Wonder chose the name he used to get out from under the Batman's shadow.

Nightwing would fly again, of course, but under a different guise. Van-Zee would return (along with a new Flamebird played by his brother-in-law) in Superman Family #183. They become the city's permanent defenders.

Back in the world of the full-sized, Robin did eventually become Nightwing and did credit his Kandorian adventure for the idea. Makes sense, and he probably talked about it a lot, or else why would Robin's own personal stalker have taken on the Flamebird identity? After Crisis, Kandor didn't exist anymore, so Dick Grayson credited a story his "favorite hero" once told him about a Kryptonian urban vigilante called Nightwing. Meh.

And in more recent times, the Nightwing and the Flamebird were revealed to be more than animals, but also mythological creatures from Kryptonian religion, and two new (Kryptonian) heroes took on mantles - Chris Kent (Lor-Zod) and Thara Ak-Var - and headlined the Supermanless Action Comics for a year.

And now you know where it all began...
Batman Comics Reign Silver Age Superman

Jayunderscorezero said…
And people say that Superman is boring and that you can't write interesting stories about him!
April 3, 2011 at 4:36 PM