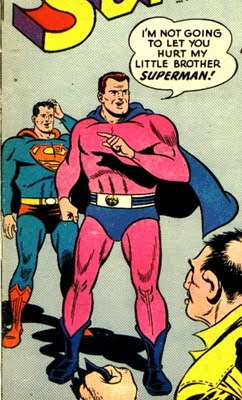 While we're on the subject of pink Supermen...

There was this time a rocket crashed to Earth and Superman rescued a barrel-chested amnesiac in pink from the wreck. "Halk Kar" had a map to Earth written in Jor-El's handwriting, which makes Superman jump to the only possible conclusion: Halk Kar must Kal-El's older brother who fell victim to radiation that kept his asleep and drifting after Krypton's explosion. Well, Halk Kar does have Superman-like powers, though they appear to have been weakened by his long sleep. Halk buys into Superman's theory, and turns out to be one of those truly obnoxious older brothers who treat their younger siblings like children. 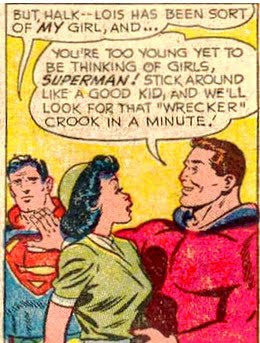 Brain damage will do that to you. In the course of events, Halk is electrocuted by the bad guys and his memory is restored. The truth? He is actually an astronaut from the planet Thoron in the Kryptonian system (where all the planets are named after inert gases, see?) who flew to Krypton and was told by Jor-El to leave before the whole place blew up. Jor-El gave him is son's star chart, which he'd memorized anyway, because the rocket's nav system was broken. The planet's detonation threw Halk Kar's ship out of whack before he could reach home, and put him in suspended animation. Since Thoron is smaller than Krypton, but still bigger than Earth, Halk has weaker powers than Superman. I'd say his planet's population was also color-blind. Superman fixes the ship and Halk is sent on his way. 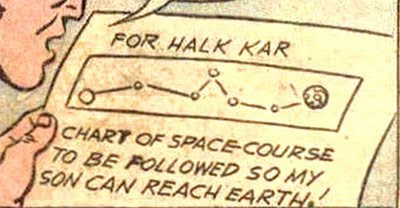 Anonymous said…
YES! I've been waiting for you to get to Halk Kar. I have no idea why I have such affection for the lummox, maybe because I am a fan of Earth-2 and that entire universe. (Halk Kar is generally considered an Earth-2 inhabitant, the logic being, since this story was later retooled for Mon-El and Superboy, the two stories are likely multiversal counterparts.)

Don't diss the Kryptonian flexitron data display matrix, which only looks and behaves exactly like earth paper. It's much more advanced. For example, it comes from outer space.
May 6, 2011 at 11:01 AM