Reign of the Supermen #286: Super-Dad 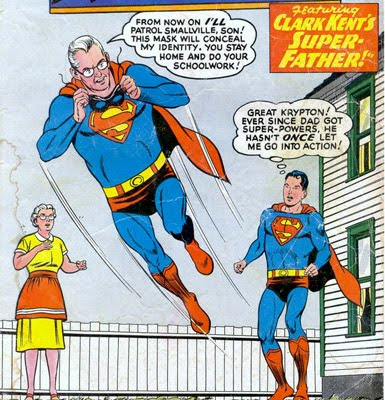 Pa Kent, a third time in the super-suit? Well, it hadn't happened in four years, so why not? We're well into the Silver Age by this point, so watch your head...

Our story begins as Pa Kent and Clark do a little cleaning in Superboy's trophy room. Pa handles an alien jewel, feels strange and just like that, he's got Kryptonian super-powers. He does what I would do if I suddenly got Superman's powers - start smoking.

Clark can't believe his eyes (despite this having happened before), so Pa demonstrates in various ways. The demonstrations include this very famous panel indeed: 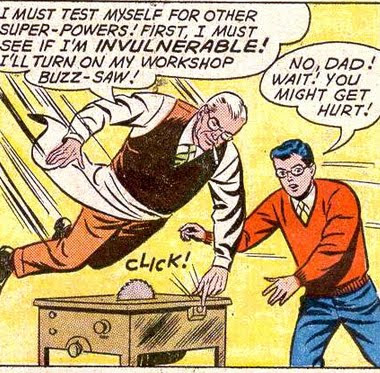 The twist is that Pa claims he can and should do all of Superboy's super-work from now on. Clark is not even allowed to use his super-powers to do chores around the house! And those Superboy robots in the basement? They're not allowed either! 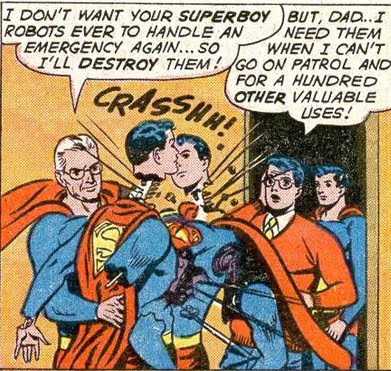 And Clark, ever the dutiful son, feels compelled to obey. It's one of the Commandments, folks. Clark is still a teenager though, so he tries to justify "one last task" a couple of times, but his Pa always shows up and sends him back to mind the store. Even in an emergency, such as when Professor Lang disastrously tries to recreate the Montgolfier brothers' 1789 balloon flight with a rooster, a duck and a sheep, his Super-Dad quickly fashions a lead helmet and throws it "boomerang-style" at Superboy's head so he can save Lang instead. 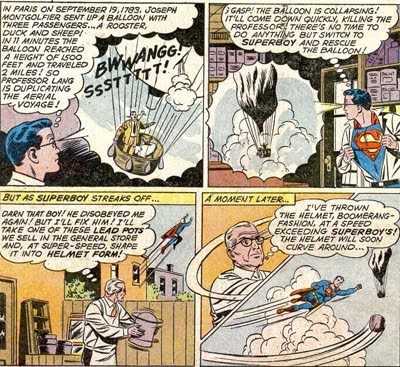 Boy just won't learn! So Pa takes away the temptation by painting the house and store, windows and all, with an "invisible coat of lead paint". It apparently stops super-hearing too, because the curious Clark has to run out of the store when his dad saves rangers from a forest fire. But he also sees and hears something he shouldn't. BETRAYAL: 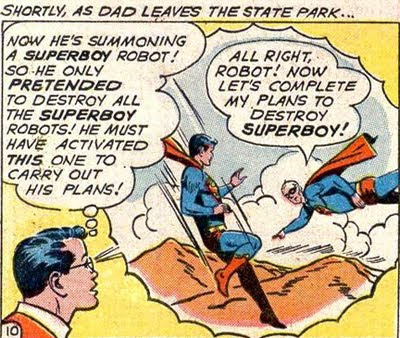 Looks like this Super-Dad is an impostor who has the real Jonathan Kent tied up in a cave and is using a Superboy robot to collect kryptonite so he can kill Superboy! Clark zaps the robot from afar, making it plunge into quicksand with its deadly cargo. He then unmasks the villain, but who is it? 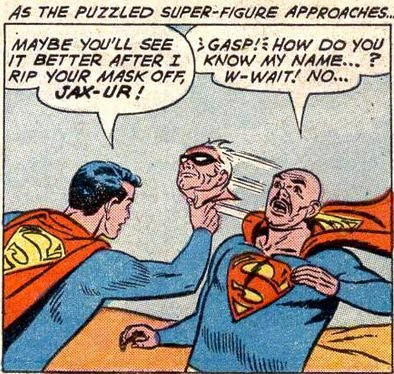 Jax-Ur! Who?? This is his first clearance, but don't worry, there's a reason Superboy knows him. Superboy sends him back to the Phantom Zone and rescues his Pa who tells the whole story (as gloated by Jax-Ur), remembered "so clearly" like it happened in the last few days, which it did. Jax-Ur is a super-criminal who blew up one of Krypton's uninhabited moons to test a new missile. Jor-El, who must have spent all his free time acting as the D.A.'s star witness, testified against him. He then spent years in the Phantom Zone, watching Jor-El's son and hating him. When he was freed by the warp of a passing comet, he vowed to destroy Superboy and rule our world. You've seen his fiendishly clever plan for yourself. So how did Superboy discover his true identity? Well, in his rush to save those rangers, he signed some receipts too quickly at the store... with his true name. 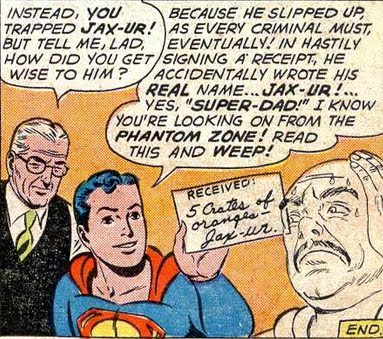 Erich said…
Just wondering, have you read the Harvey Kurtzman/Will Elder "Goodman Beaver Meets S*perm*n" story? (It originally ran in Kurtzman's magazine "Help!", and was reprinted with the other Kurtzman/Elder Goodman Beaver stories in a collection by Kitchen Sink.) I'm really hoping that S*perm*n can make an appearance in this series...
August 2, 2011 at 7:45 PM

Anonymous said…
Are you aware that a Superman analogue of sorts appeared in "Dragon Age: Origins"? Or at least, there was an elderly couple who discovered a baby at the site of a meteor crash and decided to adopt it.
August 3, 2011 at 4:25 PM